Berlin is an intriguing city. It is a place where recent history and the present come together like nowhere else I know. It is exemplified by a massive empty green space with a giant blue box on it, at the end of the famous main boulevard, Unter Den Linden. More of that in a moment.

In Berlin you can look at 100 years of history from a single spot. Go for example to one of the most feared addresses in Europe: Prinz-Albrecht-Strasse, where the headquarters of the Gestapo used to be. The ruins of the prison cells are still here. To the left is the elegant neo-renaissance Prussian parliament building from before World War One. To the right is Göring’s Luftwaffe HQ. In front of you is the best preserved fragment of the Berlin Wall that divided the city. And behind you is the excellent new “Topography of Terror” museum which shows modern Germany’s commitment to dealing with its past. It’s all there.

The city buzzes with energy and reconstruction. After the Second World War there was a widespread debate in Germany about whether bombed cities should be reconstructed in a historic way (i.e. as they had looked, e.g. with large parts of Munich or Nuremberg), or whether a new city should be reconstructed given the country’s tragic recent past, e.g. Frankfurt.

Berlin was however divided. Its two halves were dealt with in a haphazard way. In the capitalist West mainly modern architecture was chosen. In the communist East, the rubble was cleared and grand communist boulevards were created in some places, whilst many important old buildings were also restored. The money soon ran out, however. Only since becoming the capital again in 1992 has the city acquired the infrastructure and planning of an important world city once more. It has pretty much been one giant building site since that date.

So, back to that big open space. Here stood, before 1918, the enormous royal palace of the Kings of Prussia, and later Emperors of Germany lived. The Stadtschloss (or city palace) was larger than Buckingham Palace. In 1918, the revolutionary Liebknecht declared the short-lived German Socialist Republic from one of its balconies. Right at the end of World War Two it was hit twice by allied bombs: During the second raid on 24 February 1945 its roof burned out, but photographs show that the palace clearly could have been restored. It fell less than 1km into East Berlin, however, which was enough to seal its fate. It was declared a symbol of German militarism and deliberately blown up in 1950. Only the Liebknecht balcony was kept and incorporated into a gleaming socialist “people’s palace.” It housed the East German parliament, as well as a subsidised theatre, 13 restaurants, a bowling alley and a discotheque. After the fall of the Wall, here in August 1990 the East German government voted itself out of existence. The building, much loved by many East Germans, was (perhaps somewhat conveniently) found to contain asbestos and it was in turn torn down after Reunification. A big empty green space was created. Only that (in-)famous balcony remains, moved to the side of the site.

What next? Well, if you visit the mysterious big blue box you will find an extraordinary exhibit that details the history of the space and plans for the future. The royal palace is to be reconstructed at a staggering cost of more than €500 million ($650 million): a huge sum when you consider that Germany has been a republic for almost 100 years and the former Royal Family are now ordinary citizens. Mr Hohenzollern (the man who would be Emperor of Germany) certainly will not be living here!

Three exterior facades will be painstaking copies of the original. An expert team of stonemasons is already busy working on exact replicas of each individual statute and decoration. There is already talk they will need to farm the work out to Xiamen in China for cost reasons. The interior will be modern and will house the Humboldt collection of non-European art. 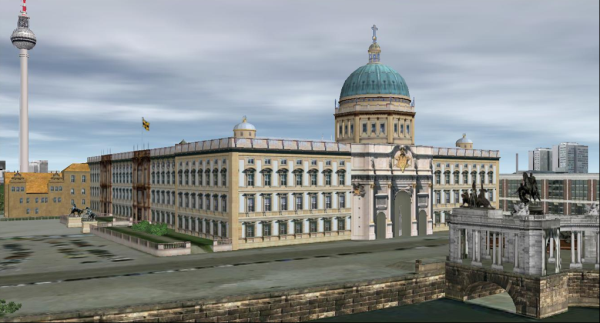 Opinions run strong on the rebuilding. The debate essentially takes us back to the 1950s and differing views on German cities of the future. Some people argue it is a grotesque sum of money to spend in a difficult economic climate on a building that reminds us of militarism and empire: aspects of German history that should be consigned to the history books. Others say it will restore the integrity of the historic core of Berlin with a beautiful new building that will serve a modern purpose.  It will stand opposite the reconstructed Cathedral, opposite Museum Island. Donations have poured in and repeated polls show that the majority of people are in favour of its reconstruction.

Work will begin properly in 2014. It will take at least until 2016 to complete, if not longer. In nearby Potsdam, they are well ahead of Berlin. Reconstruction of the former Royal Palace (also bombed in 1945 and needlessly torn down in 1959) is well underway and should be finished in 2014. It will house the parliament of the state of Brandenburg. In Dresden, too, the whole of the bombed historic city is also rising from the rubble, street by street. Love it or hate it, the reconstruction of old buildings in Germany certainly gives the repeat visitor something interesting to check up on. There aren’t many places that change appearance so drastically over a space of years and end up looking like they used to more than 70 years ago.