The big food scandal to consume Europe earlier this year, particularly Great Britain and Ireland, has been the discovery of horse meat in products labelled beef. From frozen burgers to lasagne ready-meals, horse DNA has been found in all kinds of products. Most of them have been at the low-cost end of the spectrum, but even so, few of the major supermarkets have remained unscathed, and even schools and hospitals have been discovered the offending animal in their catering. 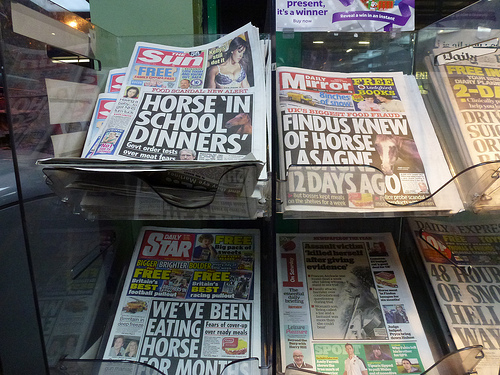 Not that there is anything wrong with selling horse for human consumption. The illegal bit is labelling it as beef. In fact, not only is horse very good for you, it is widely available throughout Europe. In Britain, we’re still rather squeamish about eating horse. But then we’re also squeamish about eating many things you find at market stalls throughout France and Spain, including rabbit, snails and some of the more oozing cheeses!

When I was living in Spain, a friend once invited me for lunch. I got there to find her preparing two succulent steaks which she had bought from the market that morning. And yes, you guessed it: they turned out to be horse! I was already hungry, and certainly wasn’t going to refuse her hospitality, so I put a brave face on it and tucked in.

It was delicious. She explained that horse has high-levels of iron, and low levels of saturated fats, and so is far better for you than beef or pork. Also, it isn’t farmed as intensively, so animal welfare is better.

One reason horse has found its way into other products is that it looks very similar to beef, so if you’ve been to a European market, you might have seen it on sale without realising it. Other foods aren’t so ambiguous. There’s no mistaking snails, for example, or even rabbits once you realise they lose their ears when they’ve been skinned. And both are delicious when cooked well! Rabbit tastes like chicken used to taste before it tasted of nothing, and snails taste of over-cooked pasta – they’re more of a texture, so when they’re cooked in garlic, as in France, they taste of garlic, and in tomato, as in Spain, they taste of tomato.

One big shock for both Brits and Americans is the unadorned nature of what you might see at the market. We’re used to seeing our food conveniently packaged in cellophane. Any resemblance to the animal it came from has long disappeared. Not so at the market. One of the stalls people find most intriguing is the one that sells all the “other” bits from the cow, including tongue, tripe, lungs and heart. For many people, these are the best bits! 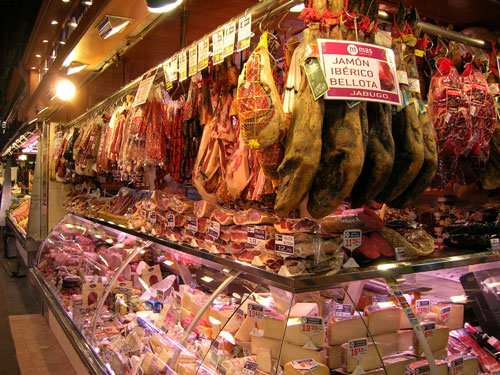 Even the chicken most of us buy has already been separated into wings, thighs or breast, so we never see the whole animal. At a European market, in contrast, if you buy a chicken, not only will they joint it for you, using outsize scissors that look like a medieval torture instrument, but unless you ask them not to, they’ll throw in the head, feet and giblets (a more palatable word for the edible bits inside), all of which go to making stock.

A lot of our squeamishness at seeing food in its natural state at foreign markets has to do with what we’re used to, both to look at and to taste. If you’re not used to seeing an animal in its raw state, of course it’s going to be a shock. If you’re not used to eating tripe, the taste will be unfamiliar, and once you find out what it is, you’re likely to be horrified. But for many people, these things are delicacies. And not expensive delicacies, either. One of the great things about Spanish markets, for example, are the stalls serving hot food that pepper the aisles of places like the Boqueria and Santa Catalina, the two iconic food markets in Barcelona. Here you can see contented locals tucking into small plates of food that you or I might turn our noses up at.

One thing you might notice during your educational travel adventure is that for many people in France and Spain, markets are where they do their regular grocery shop. Supermarkets sell the same things, but the quality is never as good, and it’s more expensive. In Spain, every neighbourhood has a local market, which is usually fixed and runs six days a week. These photos were all taken at Mercat Santa Catalina in Barcelona (near the Gothic Cathedral). They were taken by my friend, the chef Sarah Stothart, who shops there every day, and has some excellent recipes on her food blog!

In France, markets are more likely to pop up on specific days of the week. Even in Paris there are plenty of local markets, which usually start early and end by midday. You can tell when they’re coming, because late the night before, frames for the stalls are put in place. If so, it’s worth getting up early the next day to go and have a look. If you’re not on the look out for some horse, they always have great cheese, often a bread stall, and some delicious fruit. And suddenly you’ve got a great picnic lunch to look forward to. 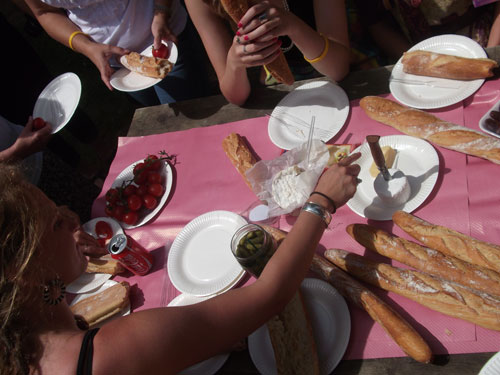