In my last blog post I introduced you to eight of the most iconic and traditional ‘must-try’ British dishes. Whilst writing this last post, it struck me that going under the banner, ‘Great British,’ didn’t technically allow me to delve into the delicious delights of specific regions. Great Britain is, after all, made up of England, Scotland, Northern Ireland and Wales, each with its own history, culture and of course, culinary traditions. So here I shall explore the four corners of Great Britain through what I think are the dishes that most exemplify the characteristics of each of these four kingdoms.

Mention Eton Mess to any English person and it’ll immediately conjure up visions of wonderful long summer days. This is, no question, the quintessential English summer desert. The preparation couldn’t be simpler; fresh seasonal strawberries mixed with whipped cream and crushed meringue. 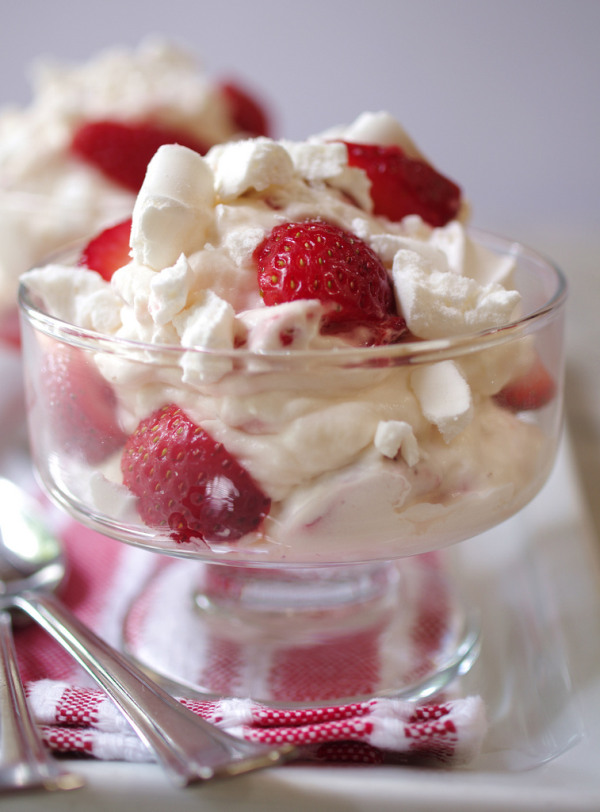 I love the name too; it was taken from two parts. ‘Eton College’ is one of England’s most prestigious private schools. It’s a boy’s boarding school just outside the royal town of Windsor, and it would seem to be from another era. The boys must wear formal dress, tails and all, and there’s a rigid hierarchical system of prefects and houses. Think Harry Potter, and you’re not far off. It’s also educated nineteen British Prime Ministers and many famous cultural and historical figures. Anyway, the story goes that the dish was named after the school because it was always served at the annual summer cricket match against the two rival schools: Harrow and Winchester Colleges. The ‘mess’ part could either originate with its messy presentation or, rather more boringly, ‘mess’ also refers to any soft food that is mixed and eaten together.

There’s a rather wonderful myth around the dish; some say that it was accidently created during the annual prize giving celebration that takes place every 4th June. An over excited Labrador dog trampled on and crushed a picnic basket that contained a strawberry pavlova and the result is what we call an ‘Eton Mess’ today. True or not, the school still serves its namesake desert to staff, students and visitors every 4th June.

Talk to a Scot and they’ll have you believe that haggii (plural of haggis) are wee (little) furry creatures that roll around the mountains of Scotland. Occasionally, these little creatures are hunted down for their delicious meat to celebrate Scotland’s national day: Burns Night. It’s true that haggis is served at Burns’ Suppers all around the world on 25th January each year; the rest however, is purely fiction. Even I, born to Scottish parents in England, was fed such a story and as children we’d listen to audio books entitled, ‘The wee haggis stories.’ The myth lives on! 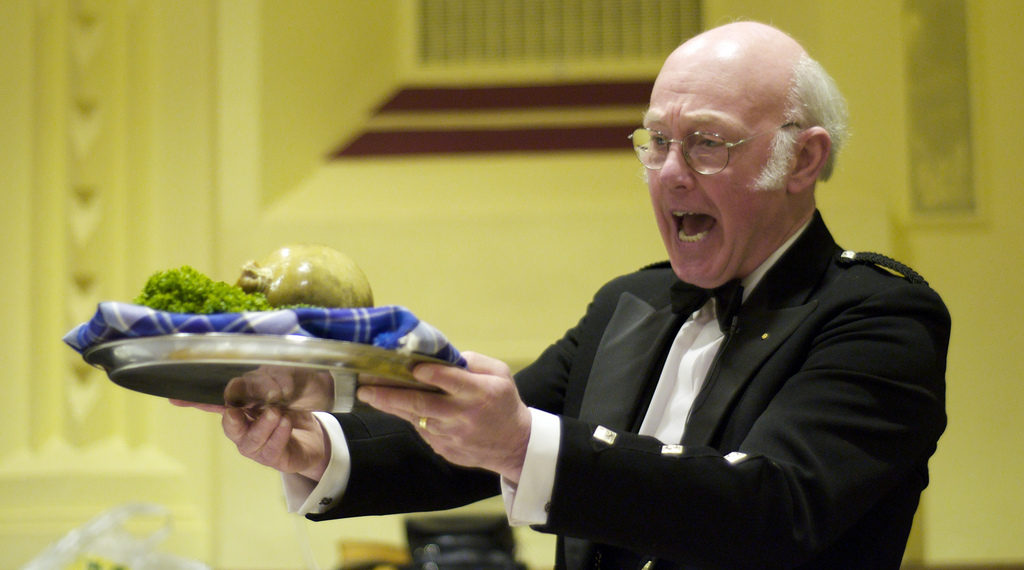 Haggis is made of sheep’s offal mixed with cereals, herbs and spices. It may sound totally disgusting but it’s actually surprisingly good. For those who decide to turn vegetarian at the mere mention of offal, there are some excellent veggie alternatives out there too.

Traditionally, haggis is served with boiled and mashed neeps (turnips) and tatties (potatoes). Despite being Scotland’s national dish, food historians believe that this type of meat pudding would originally have arrived in Scotland via the long boats from Scandinavia. The dish took off because it was a handy way to use the fresh parts of the animal that would otherwise go to waste (no fridge freezers in those days).

It was in 1787 that Rabbie (Robert) Burns, Scotland’s most celebrated poet, wrote a poem entitled, ‘Address to a Haggis’ which talks of the food with such adoration, you’d think it were actually a person. Since then, haggis and Burns have been forever linked. At the supper, the haggis will be marched ceremoniously from the kitchen on a silver platter, held aloft, whilst a piper pipes it into the room and a speaker walks behind. The speaker will recite the address and then everybody present raises their glasses (of whisky), and toasts the haggis. Here’s a link to the address, good luck on trying to decipher the meaning!

The Celts had always been keen on cooking over an open fire, but when, in the 7th century, they discovered the benefits of copper cauldrons over the open fire, there was no looking back. To this day, in those cold, windswept regions that the Celts made their home, you’ll still find a great culinary tradition of hearty soups and stews; ideal for warming you up through those long and cold winters. 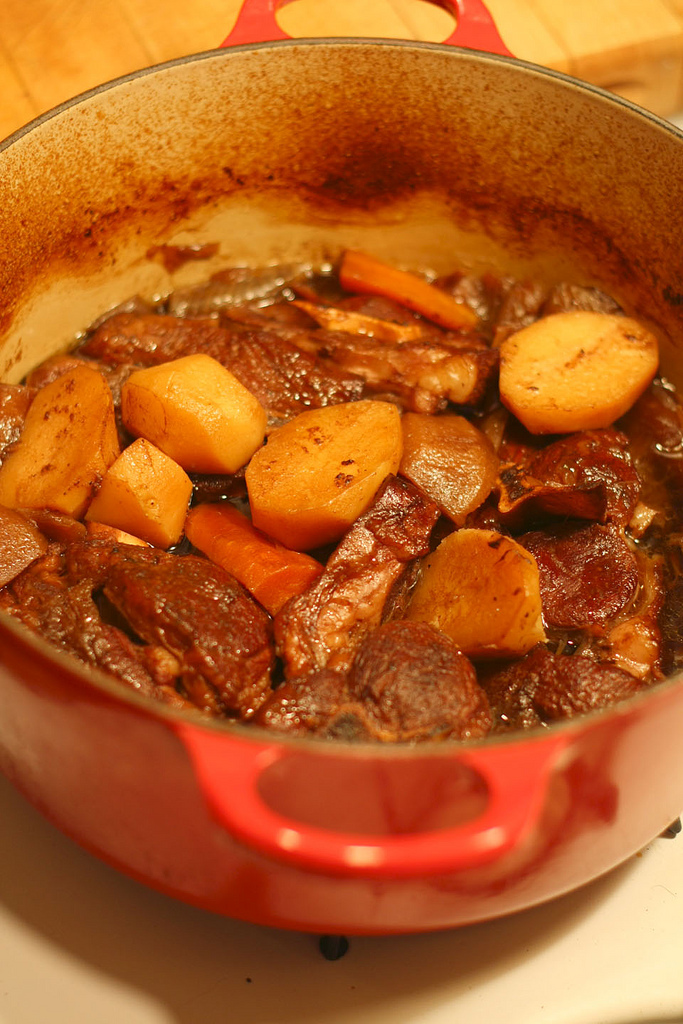 Out of all the many soup and stew variations possible, throughout Ireland, one particular combination of ingredients became so popular that today it’s simply called, Irish Stew or Stobhach if you speak the lingo. Every family has their own version, tried and tested and so called, ‘the best.’ When the Irish migrated across the world during the 18th century potato famine, they took this taste of home with them and today you can find a multitude of variations on the original, some, quite gourmet.

Traditionally a peasant food, the stew used the cheapest and most readily available meat and vegetables. Today it’s most commonly cooked with lamb but back in the day, a peasant could never dream of putting a lamb in the pot. While it was young, a lamb was too valuable for its wool, milk and offspring. So, traditionally the meat would be a tougher mutton that was ideal for a slow cooked and flavoursome stew. A big pot of the stuff would feed many hungry mouths (think big, traditional Irish families) and could happily be left on the side, letting the flavours mature and improve over time. Thus, the stew was a practical solution to every Irish housewife’s hectic life and became an enduring national favourite.

The Hollywood actor, Richard Burton, called it ‘the Welshman’s caviar’ and back in 1607, William Camden wrote that it was a popular Welsh food in his book,Britannia. Laverbread or bara lafwr, if you’re Welsh or can get your tongue around it, has, it’s fair to assume, been a staple in the Welsh diet for a good few centuries. Found in abundance on the beaches of southern Wales, in its natural form it’s a purple variety of seaweed. In the 18th century a cottage industry sprung up around it; whilst the men were busy working down the mines, enterprising housewives collected, dried and sold the laver onto market sellers form Swansea as popularity and demand for this dark green, unappetizing mush-like looking substance grew. You’ll probably have already come across laver; the Japanese are big fans — they flatten it, dry it, and call it ‘nori’ and use it to make sushi. 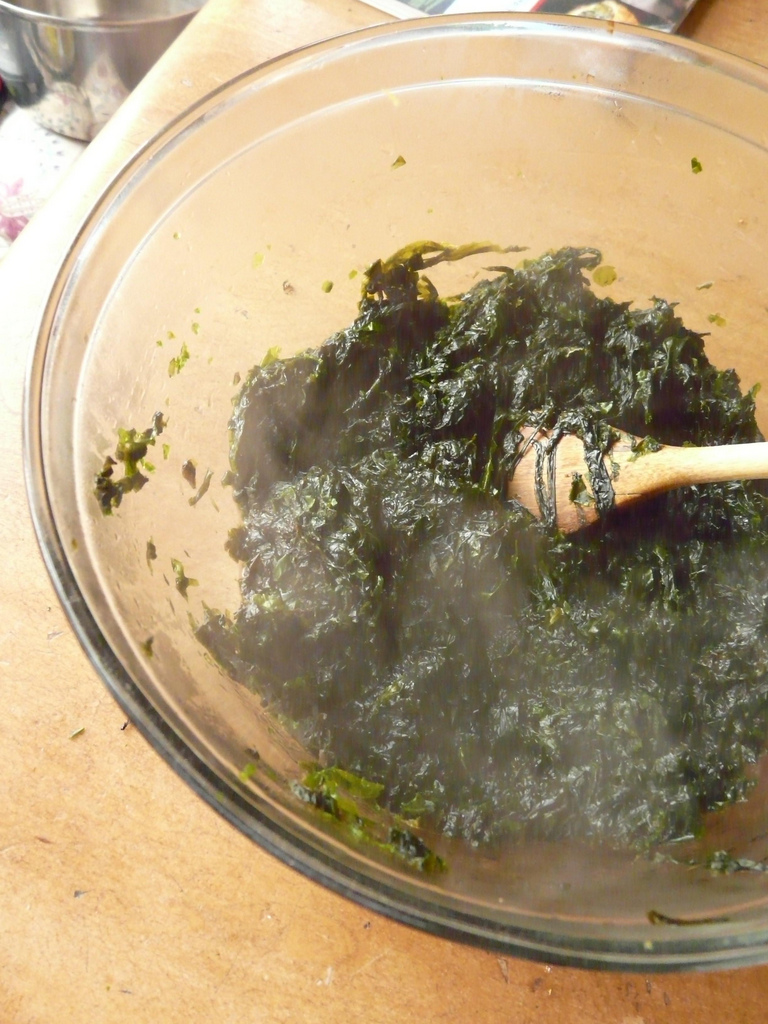 The Welsh of course, have their own culinary approach. Traditionally, the laver’s thoroughly washed, boiled and minced, by which point it will look something like spinach. Tasting something between olives, oysters and anchovies, at this stage it can be made into a type of sauce that’s served with lamb or fish. Experimental contemporary chefs have, of late, created something of a laver renaissance and are making it into pesto, paté, pasta stuffing, black risottos, cheese and soups to name a few. Laverbread however, is the most authentically Welsh approach. The dark green gunk is rolled in oats, fried, and served with cockles and bacon as part of a traditional Welsh breakfast. High in iron, protein and iodine, it’s something of a superfood so, when you’re next in Wales, don’t be put off by its rather sinister appearance, this is a must-try delicacy!