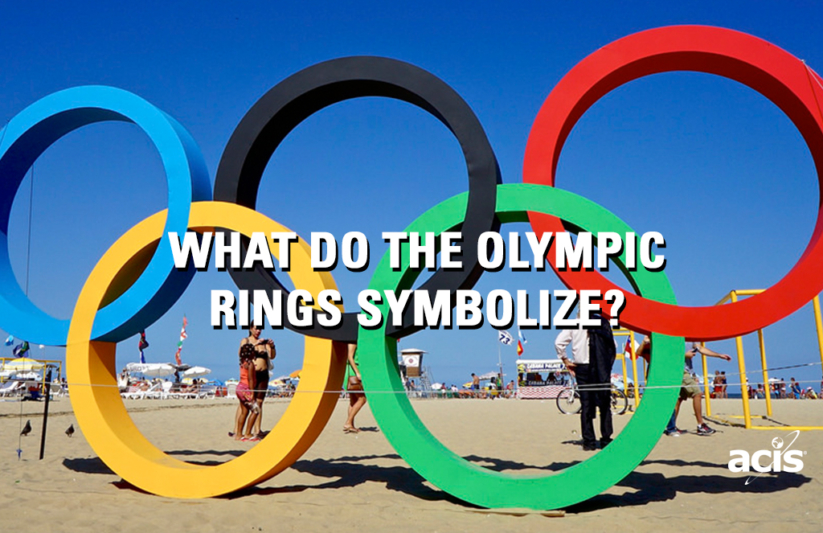 The Olympic Rings are one of the most iconic and immediately recognizable symbols in the world. They not only call to attention the international athletic competition but also a sense of international cooperation, harmony, and sportsmanship that forms bonds across national and cultural boundaries. But where did The Olympics come from and what do the rings officially symbolize?

The Olympic Games were first played in ancient Greece in 776 B.C.E. on the ancient plains of Olympia, in the western part of the Peloponnese Peninsula. They were staged as a tribute to Zeus and the Olympian Gods focusing on the physical feats of man. The competition was held every four years with foot races making up the entirety of events at first and events such as boxing, wrestling, decathlon, and chariot racing being gradually added to the games as the competition evolved. Free-born Greek men were the only participants in the ancient Olympics with no events for women, and married women were banned from attending. As Roman influence began to dominate Greece in later years, the Olympic Games started to devolve culminating in 393 C.E. when the Christian emperor, Theodosius I, called for a ban on all “pagan” festivals, ending the ancient Olympic tradition after nearly 12 centuries.

The games were revived in the late 19th century in an effort spearheaded by French Baron Pierre de Coubertin who was a major proponent of physical education. He visited the site of the ancient Olympic Games and became inspired to revive the tradition on an international scale. He proposed the idea at the meeting of the Union des Sports Athletiques in Paris in 1892. Two years later he founded the International Olympic Committee (IOC), and two years after that in 1896, the first Olympic Games of the modern era were held in Athens, Greece.

The opening ceremonies for the games were presided over by King Georgios I and attended by a crowd of 60,000 spectators. 280 athletes competed from 13 nations (all male) in 43 different events. The games were held every four years since with the exception of 1916, 1940 and 1944 due to the first and second world war until 1994 when the Winter Olympics were first held two years apart from the summer games in Lillehammer, Norway.

The Olympic Rings came into existence after the 1912 Stockholm games when athletes from the five inhabited parts of the world were all represented (Africa, Asia, Europe, The Americas, and Oceania). IOC founder Coubertin drew the rings by hand on the top of a letter he sent to a colleague, and they were then used at the IOC 20th anniversary celebration in 1914. Shortly thereafter, they became the official symbol of the games and were scheduled to debut at the 1916 games in Berlin before the games were canceled due to WWI. They were officially debuted in Antwerp at the 1920 games and have represented the Olympic Games ever since.

The colors of the five rings and the white background were chosen in order to have six colors representing the flags of every country in the world. No one color represents any one continent, but the colors act as a composite representing the unification of the world’s nations under the Olympic spirit of cooperative competition. When the five rings were debuted, five successful games had been staged, so it’s possible that each of the rings alludes to one edition of the games.

The Olympic Rings in Greece

Over the years, you might have heard about (or seen) a stone with the Olympic Rings engraved on it in Delphi, Greece and thought it to be somehow connected to the Ancient Olympic Games, bridging the gap between the ancient and the modern. Well, if you have, I hate to be the one to burst your bubble…

Those Olympic rings were created in 1936 during the first Olympic torch relay. Carl Diem, president of the organizing committee of the Berlin games was the first to organize an Olympic torch relay from the site of the Ancient Olympic Games all the way to the Olympic Stadium in Berlin. Along the way, he staged a torch-bearer ceremony in Delphi and had the engraved stone installed. When the torchbearers went on their way, the stone stayed in Delphi for years to come, confusing many visitors as the years went by.

While The Olympics draw their inspiration from Ancient Greece, The Olympic Games as we know them are very much a modern creation. While they’re an amazing and entertaining display of athleticism and sportsmanship, they’re also a representation of cross-cultural partnership and exploration. They act as a perfect example of the commonality we all share, no matter what country from which we come.

What do you love about the Olympics? Tell us in the comments section below!