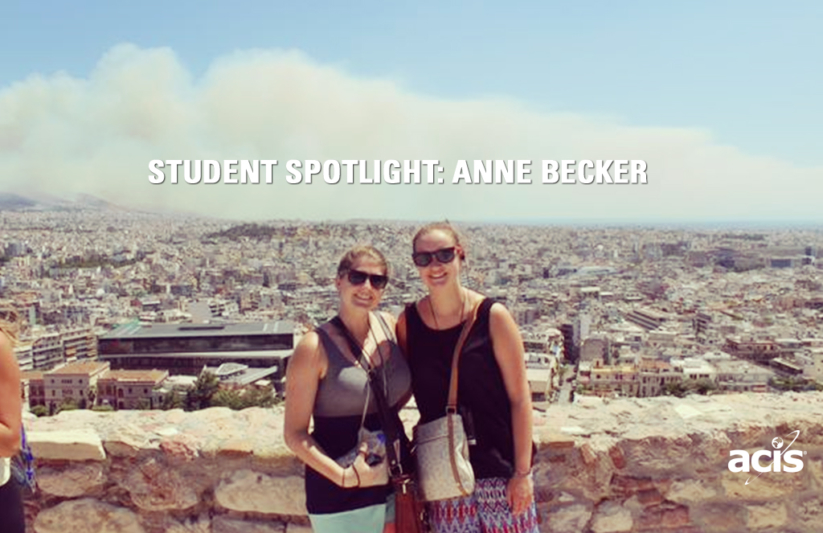 This guest post was contributed by Anne Becker, a Senior at Mechanicsburg High School in Mechanicsburg, PA. Anne traveled to Italy and Greece in the summer of 2015 with ACIS.

Almost two months ago I embarked on a trip with ACIS that has changed my life forever. Now, for starters there were many things that went into making this trip a possibility for me. I was lucky enough to receive the approval from my parents to go, however I knew that I would have to contribute financially. I was also lucky in my job search, finding an employer that was willing to be very flexible with my busy schedule. For over a year I balanced dancing, playing field hockey, working, and most importantly keeping my grades up. There were many things I had to sacrifice so I could work longer hours in order to save up for the trip, but ACIS made it all worth it.

Towards the beginning of the 1.5 year wait for the trip we decided to do a fundraiser. It was a big Italian and Greek styled dinner with a silent auction at the end, and we had over 30 people bring homemade dishes or auction items. It was a very successful night: including donations, we made just under $8,000, however, that wasn’t the end of the fundraiser. ACIS was having a contest at the time for who could come up with the most creative and lucrative fundraiser. The winners of the contest would receive up to $2,500, and luckily Mechanicsburg won for making the most in one fundraiser! This helped take away a portion of the financial burden that was on the shoulders of those of us on the trip who were paying for it ourselves. It also gave us a sense of pride in the fact that we had won! 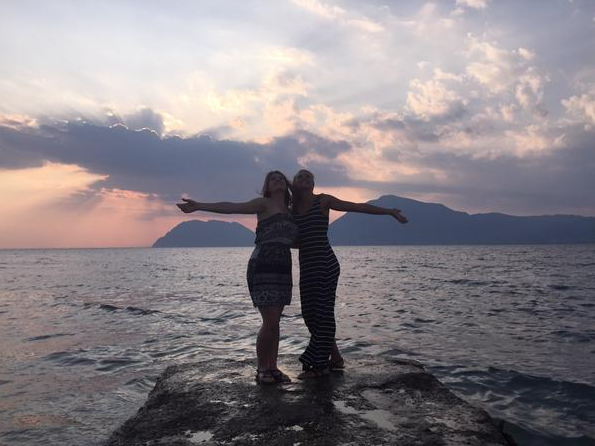 On the trip abroad is where I appreciated ACIS and their support the most. From the moment we stepped onto the plane in New York, we knew we were in good hands. Traveling with ACIS, we got to do and experience things we would’ve never done on our own. Some students went to Florence for a day while other students spent an extra day in Rome. Our teacher wanted to make the additional day in Rome extra special, so she talked with ACIS to see what they could come up with. At no extra cost to everyone on the trip, they took us to a very nice restaurant our last night in Rome. They surprised us with the news that we were sitting in the same room in which Julius Caesar was assassinated. This meant a lot to me as a Latin student, and was one of the most incredible experiences I’ve ever had.

Everyday that we were in Italy and Greece we constantly came into contact with people who spoke at least a little English, so the language barrier wasn’t a terrible thing. That is until you get in a cab in Athens with 3 other students who only speak English, and your taxi driver only speaks Greek…and he gets lost. Then it can be a bit of an issue. When this happened we didn’t know where we were in Athens, and we hadn’t been there long enough to be able to recognize any landmarks. I knew we were lost was when we passed a fountain I didn’t recognize. We drove around for about 20 minutes, and we were nowhere near our hotel or the Plaka. At this point the uncomfortable worry was tangible in the snug Greek taxi. Finally, our taxi driver pulled over to talk to another taxi driver, and luckily he did speak a little bit of English. One of the students in the cab (who is also one of the best natural leaders I know), was able to tell them our hotel was on Falirou Street near the Acropolis Museum, and 15 minutes later we were happily getting out of the cab at the steps of our hotel. This, like the trip as a whole, was a phenomenal learning experience that we’ll never forget.