The concept of encouraging sustainable agriculture and locally-sourced ingredients produced with quality rather than quantity in mind has been gaining traction in recent years. But in Italy, this is how people have always lived: taking their time, nurturing what the land provides, and creating world-renowned produce by means which are passed down through generations. Given this rich history, it should come as little surprise that the Slow Food Movement, promoted as an alternative to Fast Food, launched in Italy in the 1980s.

Here are just three examples of the craft and care that goes into creating some Italian staples. 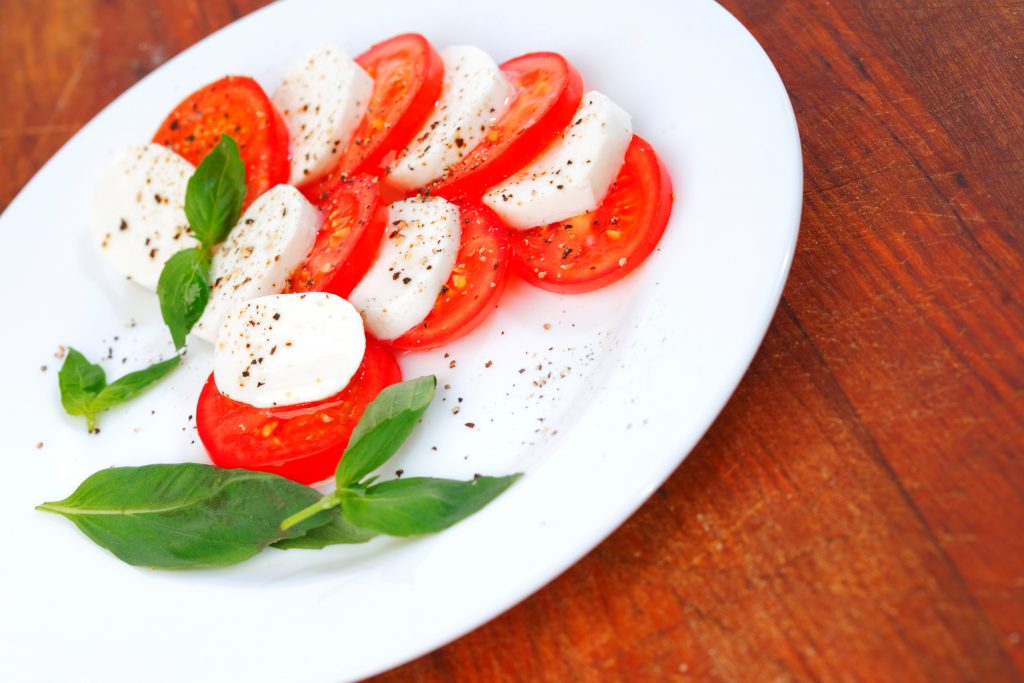 Sometimes referred to as “white gold,” this type of mozzarella cheese, made from the milk of the Mediterranean Italian buffalo, has origins dating back to at least the 12th century. Back then, it was made by Benedictine Monks in Capua. For this soft, cream-filled cheese, freshness is key, so it is manufactured on-site at the farm and best eaten the very same day.

Everything depends on the quality of the milk, and that means keeping the cows happy. At some of the farms near Naples where this mozzarella has been made for generations, the cows line up for massages from specially-installed rotating machines, sleep on soft rubber mattresses, and go up to the milking stations whenever they feel the need! Since a chilled-out cow produces better milk, they also have showers where they can cool off during the hot Italian summers, and have music regularly played to them.

The fresh milk, which arrives each morning, is left to curdle for about 4.5 hours until a thick paste is obtained. This paste is then ground up and heated at 200F until it starts to melt. Expert artisans stir this mixture in huge cooking pots, and once it is deemed ready, the cheese is removed from the cooking water and molded into balls, to be sliced up and eaten as soon as possible. 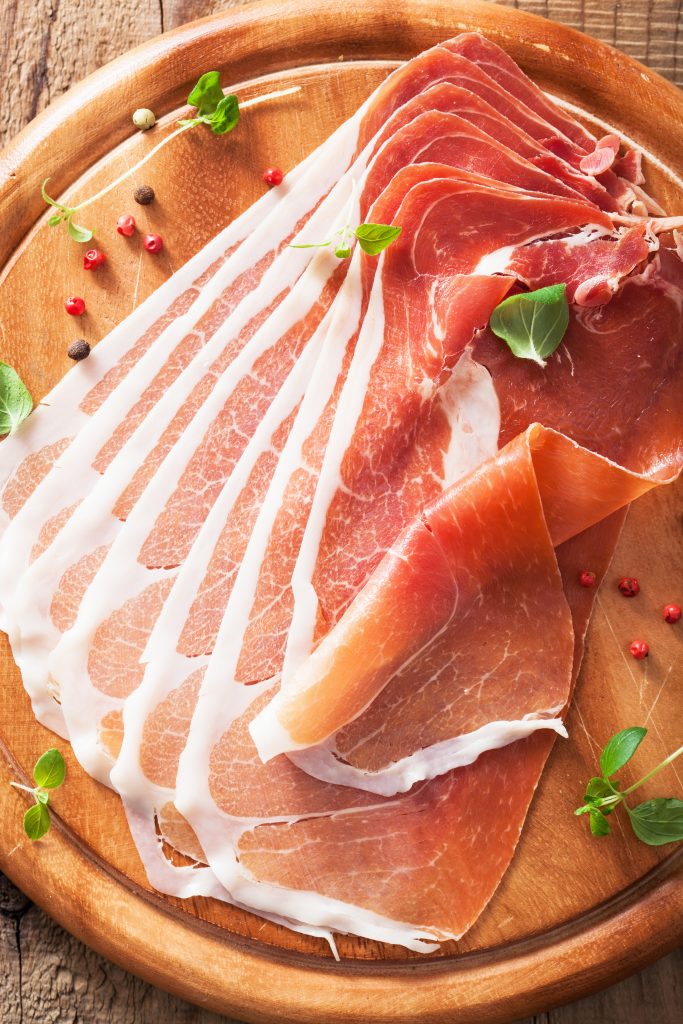 To carry this name, this Italian ham has to be made by one of the 160 official producers in a specific area of Emilia-Romagna, in the north of Italy. This is a way of safeguarding tradition and guaranteeing the authenticity of a product that is exported all over the world. Parma ham is always made from the hind leg of either a pig or a boar, and it is the perfect example of slow food, being aged up to 3 years before it can be sold.

Simplicity and precision are key in making a genuine Parma ham. They say that only 4 ingredients are necessary: Italian pigs, salt, air and time. The ham is first cleaned, salted, and left for about two months, during which time it is pressed to drain all the blood. Next, it is washed several times to remove the excess salt, and is then hung in a dark, well-ventilated, and carefully-controlled environment: too hot and the aging process won’t begin; too dry and the meat will be ruined.

The Prosciutto is cured with sea salt and fat, sometimes mixed with a paste of other spices to produce a rosy color and unique flavor. The exposed surface of the meat should be dry and hard, while the inside will be soft and retain some of its sweetness. Every single ham is tested by an expert who pokes it with a sharp horse bone before smelling it to determine its quality. If the ham passes this smell test, it is fire-branded to mark it as a genuine Prosciutto di Parma. 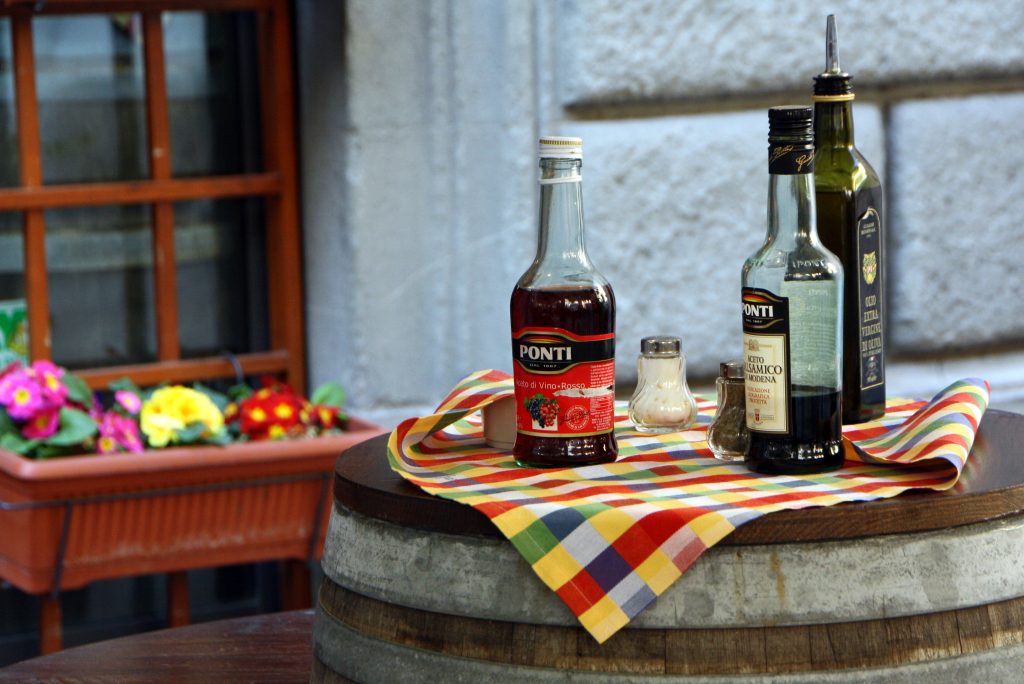 Olive trees like to take their time. Some will be 12 years old before they even produce their first fruit, but they make up for it with their longevity. Certain olive trees in the Mediterranean region are believed to be well over 1000 years old! But once the fruit is ready, turning it into olive oil must be done quickly in order to preserve the flavor. According to some, the best time to pick the fruit is early on, in October, and then press it within four hours of the harvest.

It takes 5 kg of olives to produce 1 liter of olive oil. The fruit is ground, together with the pits, by large grinding stones until it produces a sort of paste, which is then pressed to extract the oil using hydraulic presses. It couldn’t be simpler! And only the oil obtained from this very first press is called Extra Virgin. Whatever is left of the paste is often sold off to other producers who proceed to press it further, but this produces lower-quality oil, which no Italian would ever drizzle over their salad!

So next time you taste some of these Italian delights, think of the time, the care, and the long-standing tradition that went into producing that mouthwatering bite, and make sure that you too take the time to appreciate and savor it.

Ready to experience Italy’s cuisine for yourself?
Discover ACIS trips through our free catalog!