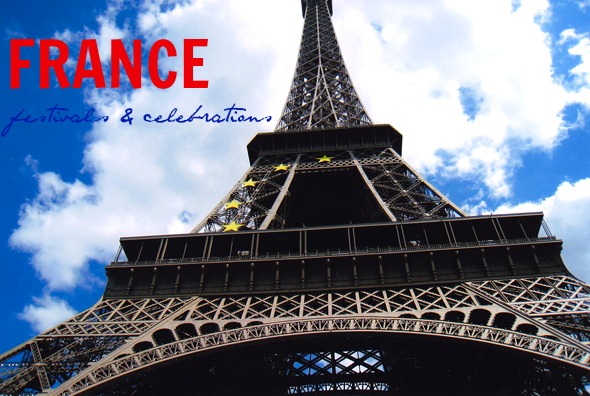 June and July: great months to be travelling in France!

Yes, both summer months, so if our European weather is behaving itself that should mean long days filled with sun (hopefully); balmy temperatures pushing 70-80 degrees (and the further south you go, the warmer it gets!); wonderfully warm evenings ideally suited to strolling the streets with the world at large, soaking up the street vibe and topping it off with an ice cream. The cafes are there for those moments when you’re ready to sit with a cool drink and watch the world go by—people-watching, always a great past time, a great way to pick up a feel for the country and its rhythm of life. The landscape is in full bloom, lush green and with ripening crops in the fields; sunflowers add their bright yellow bloom of happiness particularly in the hinterland of the Loire; grapes are ripening on the vine; in the Mediterranean south, the cicadas will be chirruping their welcome, the aroma of lavender never far away. Ah! Summertime in France!

If that’s not enough for you, get the timing of your visit right and you will get the unique opportunity to experience a nation in full festival mood.

How come? Because these summer months see two of the great ‘fêtes’ in the french national calendar: Fête de la Musique and the biggie: la Fête Nationale, the ‘quatorze juillet’ (aka Bastille Day), France’s National Day. There are few better ways to sample the soul of any country and its approach to life than catching it in full-on celebration mode.

Taking place on June 21 (the longest day) Fête de la Musique was conceived as a festival of live music. In effect though, it is so much more, I always think: a great national blow-out celebration to welcome summer; a celebration of life, of the joy of music. It is ‘joie de vivre’ personified.

There’s nothing more exhilarating than strolling the quartiers of Paris to the sound of music of truly all sorts; mingling with the populace out enjoying themselves in this free festival on the streets.

I still remember my first experience of the fête. As you often do when travelling, it was discovered purely by chance, a visit to Paris unbeknown to me coinciding with the date. There I was doing all the usual things you do on a visit to the city and come evening, found myself strolling Montmartre. As I hoofed it up yet another flight of stairs to reach the area that is the heart of Montmartre, suddenly the hub-bub of the bars and cafes I’d passed and the gentle buzz on the streets below became woven with a touch of opera…then, from a different direction, jazz…from another, rock guitar. None in competition with the other but simply a vibrant streetscape with a soundtrack of impromptu music on different street corners; people doing the strolling thing, passing between each ad hoc performance space, lingering a while, or a lot. With the summer evening fading towards sunset and beyond, the lights of cafes with their clatter and chat, lights from the nearby apartments beaming out, shutters open; views across the city as the lights of a Parisian evening grew stronger, what an evening it was!

Across Paris, it was a scene repeated in each arrondissement. Whilst the main stage was set on the Champ de Mars by the Eiffel Tower and packed in the crowds; elsewhere throughout the city, as I was experiencing in Montmartre, simply a free flow of music, of people and a beautiful summer’s evening. Something quite magical.

It’s a festival that continues to grow in popularity as it has done since its genesis in the 1980’s and is celebrated across the country—it’s not just a Parisian thing. I’ve been lucky enough to be in Nice to coincide with the fête, its main stage on the Promenade des Anglais with the Mediterranean Sea lapping the shore behind (how cool is that!). Most cities, large or small, will do something similar. Everywhere, everyone, is encouraged to join in.

Those who are just back from their French adventures, you may well have had the chance to experience it for yourselves.

If Fête de la Musique is a freeform exuberance of music, maybe a predominantly youthful festival, the biggie in the french national calendar is that which is just around the corner from us now: 14 July, the ”quatorze juillet” or to give it its official title: la Fête Nationale. Be anywhere in France at this time and simply enjoy experiencing the French nation celebrate themselves.

Of course, most of us refer to this one by the unofficial shorthand, ‘Bastille Day’. Whilst the events that kicked off the French revolution in 1789 began with the storming of the Bastille prison on 14th July (this was the King’s prison housed in one of the Paris city gates, hence its significance), this was just the start and the first of four revolutions against Authority (royal or otherwise) that peppered themselves through much of the following century. The date and the celebration is one that draws together all of these strands as a celebration of the French nation and of its principles of ‘liberté, egalité, fraternité’ (liberty, equality, brotherhood).

Red, white and blue are the colours of the day, of course. In Paris, the daddy of all tricolours, the nation’s flag, flies beneath the arch of the Arc de Triomphe—quite a sight to see! It also flies proudly from all public buildings but even the less expected join in: you’ll likely spot buses flying the flag as if some oversized diplomatic limo.

It’s a day for families; a day to enjoy however you wish. It’s a day that during the morning has its formal side; whilst come the evening, it parties.

The main parade of the nation takes place on the Champs Elysées. Predominantly a military parade, the President taking the salute from a stage erected in Place de la Concorde; a fly-past by the air force trailing smoke in the national colours. However, around the country in places large and small, communities will gather at their Mairie (Town Hall) or central town square for a formal parade; the Mayor wearing the tricolour sash of office, standing accompanied by the local officials; the townsfolk gathered and surrounding the occasion; the playing of the Marseillaise (the French National Anthem); a small military parade; wreathes carried and laid at the local war memorial. The contrast with the grand défilé taking place in Paris couldn’t be greater but yet, this is a sense of the nation coming together.

Needless to say, it’s a great excuse for families and friends to come together for that great french social occasion: a meal! Cafes will be full, which adds to the challenge of trying to get a table yourself if you’ve not realised the day it’s to be!—go early, certainly in the evening, is always the best plan.

Around the towns and villages of the nation, there can be mini fêtes to celebrate the day; food festivals; petanque competitions beneath the trees of the local town square; music. It’s a day you set out to enjoy anything that you come across!

What everyone is waiting for, however, is the evening. Music, Balls and ‘feu d’artifice’: fireworks!

You can guarantee that wherever you are, and certainly in Paris as well as the larger towns, there will be concerts and balls erupting all over the place. In Paris, the most famous of these are those arranged and hosted by the Sapeurs Pompiers (the fire brigade). But never fear if you’re not able to get to one of these, there will likely be something somewhere to enjoy, to mingle with the locals and yes, here we’re back to ‘joie de vivre’! The streets where you are will be full of buzz; before and after dinner, families, friends will likely all be out strolling: the ‘promenade’.

This is all in anticipation of the finale to the day, which you can guarantee will be at around 11pm: fireworks. Being France, you know it’s going to be done with style, creativity and more often than not that can also mean choreographed to music.

The grandest of them all erupt in Paris (as you’d expect). 600 000 or more happy people will be on the Champ de Mars, having enjoyed impromptu picnics and in full expectation of this year’s balletic production of ‘son et lumiere’ (sound and light): in short, musical fireworks.

With the Eiffel Tower featuring as backdrop or prop (every year is different), this is a display not to be missed—even the most blasé about fireworks will be wowed!

Across the nation, it is a scene replicated. Last year, I was lucky enough to be in Biarritz on the day. With the entire town out on the streets enjoying the evening festivities, it was great to head down to the beach, the prime viewing spot, lie under starry skies and watch the fireworks as they erupted over the bay. If you’re lucky enough to be on the Loire, you can be standing on the banks of France’s greatest river in the shadow of a floodlit chateau enjoying a similar scene.

It’s a great communal experience. There’s a child within us all that simply enjoys a good festival and a great fireworks display—and the French do both so well!

For those whose July travel includes July 14th, all I can say is enjoy it, enjoy a different sort of day, soak it up and may your fireworks be magnificent! Why not let us know what it was like for you. (I believe I’ll be in on the Loire, so am looking forward to seeing how Tours celebrates!)

As they say locally, bonnes fêtes!

One thought on “FÊTES and FEU D’ARTIFICE: Welcome to Summertime in France”