AN IDEAL WALKING TOUR OF ROME AT NIGHT.  PART 1

We may have begun our trip in Rome, or we may have arrived from somewhere else, but we have at least two nights, if not three, to explore the Eternal City!

Let us imagine that our hotel is in the area of the central railway station, Termini. Our first meal is at a local restaurant that is within walking distance from the hotel, and after a delicious dinner, we will take advantage of the Metro underground line to reach areas that are easily connected with it – the easiest to think of are Trevi Fountain and the Spanish Steps.

From the railway station we would get on the stop Termini or Repubblica, and in two stops we would be at Barberini, where we are greeted by the beautiful Fountain of the Triton.  Its elegance, the powerful jet of water and the detailed limestone carving, reflect the glorious times of the “Rome of the Popes” in the 17th century, and tells us the name of the greatest Baroque artist, Bernini.

From the square, we take a downhill walk over to the Trevi Fountain. We pass by nice clothing stores, gelato parlours, cafés and bars. Then, via a narrow street passing the Academy of Saint Luke, an old and prestigious artists’ academy, we will arrive in front of the majestic Trevi Fountain. 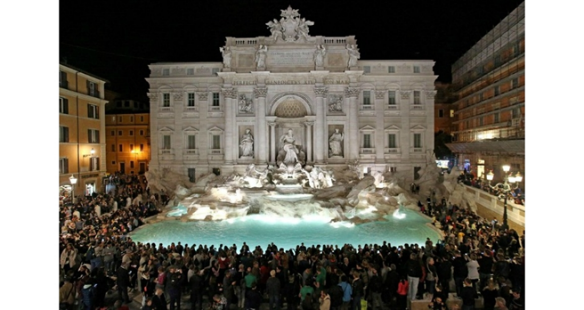 It is legitimate to say WOW! Not a common fountain to see in a city centre!

It took about 30 years to be built, and guess what? It still conveys the water that flows into Rome by one of the ancient Roman aqueducts, Acqua Vergine. The free standing male sculpture is Ocean, the personification of water, pulled on a shell-shaped chariot by two tritons.  He controls the salubrious abundance offered to the viewers.

An old tradition has all visitors to Rome toss a coin in: it is said that if you make a wish and toss a little coin, your wish will come true.

So yes, stand with your back to the fountain, pick up a coin and throw it: right hand across the left shoulder!

Here we normally give about 20 minutes to take pics and get a gelato then, once we have regrouped, we take a walk of another 10 minutes to the Spanish Steps.

This has always been the quintessential for elegance, never has been seen such a staircase in an outdoor space, you would rather expect it to be inside an opera house and in a royal palace.

It takes its name after a legacy with the first embassy opened in Rome, the Embassy of Spain that is still closeby, and was built to symbolize the reconciliation between Spain (that occupied the square below) and France (that had established its religious headquarters on the top of the hill).

The hilltop is marked by the two-belltowered French church, Trinity of the Hill, flanked by the French Academy of Fine Arts to its left and the 5 star Hassler hotel to its right.

In front of it, stands one of the Egyptian Obelisks that the Romans took as souvenir once Egypt became a Roman Province.

The flights of steps, divided in three platforms in honour of the Holy Trinity, descend gradually onto the square at which centre is the Barcaccia (shipwreck) Fountain, that really resembles to a shipwreck with the water that does not spout out but rather flows as the boat re-emerges from the bottom of a river.

It was carved by the father of Bernini and perhaps the young boy tested his skills with the hammer and the chisel too.

Last but not least, the Babington’s Tea House, the first ever opened in Rome as far back as the 18hundreds by two English ladies at the time when tea could only be bought at pharmacies.

If we are not too late we can continue over along the Via del Babuino to reach the big Piazza del Popolo.

The square marks the northern entrance to Rome along one of the earliest Roman Roads, the Via Flaminia.

During the Rome of the Popes, pilgrims coming to worship during Holy Years would enter the city through its main gate and obelisks that had been unearthed from their original spots where re-erected so to provide a marked pathway to reach the main worshipping churches. From here the so called Golden Triangle stretches out, three main streets filled up with stores of all sorts.

In the background we can see the Twin Churches, one of them normally stages funerals of major artists.

Now it is probably time to make our way back, we can leave the square, get on the Metro from Flaminio stop and return to the hotel for a good night sleep.