Looking for discounts, World Traveler Rewards, and more?
Travel Deals
It’s over and as the world renowned English soccer player and commentator, Gary Lineker, has famously stated, “Soccer is a game played between 22 players, it lasts 90 minutes with a potential of extra time with penalties, and the Germans always win!”  How true indeed.

This was a glorious four weeks and a sort of coming of age in America.  It was a great reintroduction of a game that has captivated the rest of the world and at long last has officially captivated the USA.  More Americans travelled to Brazil than the citizens of any other country to watch the games.  No easy feat as we need a visa to get into Brazil.  Twenty-three million people watched the USA vs. Belgium game which was more than the finals of the NBA or the World Series.  Over twenty-six million people from the USA watched the World Cup Final.

In a country with four distinct seasons of sports and very little move to maneuver in between, 23 million kids play soccer and there are three million registered playing at soccer club level.  Americans have adopted European teams.  Every game of the Premiership is shown live here along with the Spanish and Italian leagues.  Young fans wear t-shirts with Messi and Ronaldo written on the back and casual conversations in bars are now informed conversations about soccer from people who are passionate and truly love the game.

To see this change in the USA is remarkable and it is only going to get better.  The Copa America will be hosted in the USA in 2016.  The MLS is expanding its franchises and is now playing to full stadiums.  In a country this big with a diverse population with roots in this game, there is no doubt that we will find our Messi’s and Ronaldo’s within the next few years.

How exciting was the World Cup?!  It was unbelievable.

It was the first time that we ever had water breaks, first time we ever saw our referees with a can of shaving cream to mark the 10-yard spot for free kicks, first time a player who bit another player claimed that the other player had fallen on his teeth, first time that so many teams were bounced during the preliminary games (notably Spain, England, and Portugal), and it was the first time a host nation had ever been thrashed so badly in a semifinal by the eventual winners.  The beautiful game was being played by the Germans and Dutch and not the Brazilians. 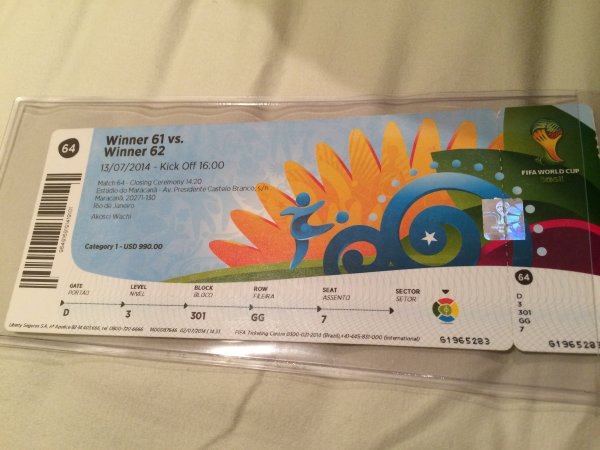 One of our Group Leaders, Jamie Dewaele, was lucky enough to go to the World Cup Final in Rio last Sunday.  Jamie is a social studies teacher in California.  I had bumped into him in Versailles this past spring.  He is an avid soccer fan and a Chelsea supporter and he is helping us with our plans to expand our GoPlay program.  He shared his experiences and the excitement of being there with us and will be posting a blog on the GoPlay website shortly.

It all seemed to fly by.  The crowds, the fun, the heartache, and the incredible coverage on TV.  Thank you ESPN for great commentary, great analysis, and extraordinary camera work.  You truly brought the beautiful game alive.  If hockey gained its growing-up status due to high-definition and the fact that we could actually spot the puck, then soccer gained its mass market in America through the 70 cameras that filmed every moment and replayed in slow motion the dramatic goals, fouls, and interactions that make this game so fascinating to watch.  I will miss it but never mind…the season starts again in three weeks!

“In 1978, Peter Jones founded ACIS with a few colleagues, who all believed that travel changes lives. Knowing the important difference between a trip that’s mediocre and one that’s extraordinary, he built ACIS from a deep belief and understanding that ACIS group leaders and participants deserve the best—from itinerary development to hotels to perhaps most importantly, the people hired to guide teachers and students throughout the journey.”
BrazilsoccerSouth Americasports