Do I hear people running for cover? Do the words ‘William Shakespeare’ have you coming out in a cold sweat? Does the thought of an English Lit lesson studying some of his work fill you with dread (and I make no distinction between teacher and student, loyal reader )? It’s OK to be honest and say ‘yup’. After all, what’s it all about? – all that language; all those words; all that going over the same description in different ways time and again; then there’s talk of things like ‘dogs of war’ and all sorts of other nonsensical stuff…What’s it all about? Aargh!

Let’s speak the obvious – yes, it’s a challenge. For many, it can be a total turn-off. Sitting at desks in a classroom ploughing through all those words, as it was in my time, well let’s just say at times it was much more entertaining looking out of the window at the local pigeons cavorting on the windowsill! For those who, from the start, ‘got’ Will, great! For all teachers out there who have the magic touch, can face down the student dread in front of you and give your students the key to bringing him alive, I am in awe: you will be well remembered! 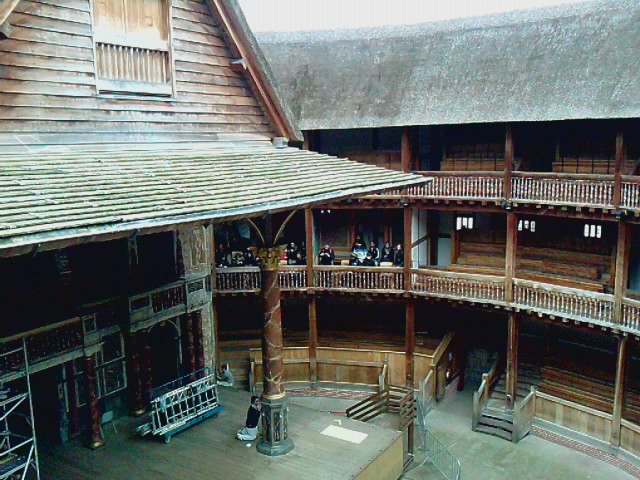 Happily, since my purgatory with Shakespeare, a wonderful place called the Globe Theatre in London has come to be. It has to be one of the best inventions of recent times. For anyone who’s had the pleasure, yes the pleasure, of a workshop at the Globe, it is a Shakespearean Damascene moment! You see, those wonderful Globe people can take Will apart and put him back together again so we can all understand him: oh, if it had been around when I was grappling with Twelfth Night’s crossed garters!

The key to Shakespeare? If you are desperate for a tip-off, I would say, simply, understand him: why he wrote as he did and included the things he did; know a bit of the context of early theatre and his time (16th Century England). The bottom line was he was there to entertain the masses. To succeed, as he did brilliantly, he had to appeal to them and their instincts: it was that or riots in the theatre, facing down a torrent of rotten vegetables (an early form of X Factor?) or bankruptcy or possibly worse. So, all those words, words and more words are simply speaking to all parts of his audience, with their range of knowledge, literacy and life experience, paupers to middle classes; they speak of a scene set without stage scenery; a scene performed in daytime no matter whether the plot calls for night or day. That was early theatre. I guess Will would say, ‘come on guys, give me a break, I’ve got to tell everyone what’s going on’. And as for all those strange turns of phrase? Easy: they are all references that people of the time would understand (yes, dogs were used in warfare in history: would scare the living daylights out of the opposition when let loose as part of an attack!).

So do not despair, all you who have issues with William Shakespeare. There’s hope: go ‘Globe’.

Literary issues aside, there’s serious intrigue at large in these very weeks we’re living through at the moment: the question is whether or not he was right. Who? William Shakespeare himself, that’s who (pause stage left, whilst the English Lit. Establishment re-gather their composure).

Is this a heresy I speak?

Let me explain. We all know Will wrote Plays and Sonnets. The Plays covered a range of topics: Comedy, Tragedy, History. And in those Histories, english literature and history cross paths. The truism is that the Histories as written by Shakespeare encapsulate the history of pre-Tudor England as we have come to accept it to this day. Look at the list of Histories he wrote and it is the progression of English history and its Monarchs through the period we now call the ‘Wars of the Roses’. This period in the 1400’s saw a tussle for the Crown of England between different sides of the one family. All descended from Edward III (he was around in the 1300’s and had too many sons!), it’s a story of the rise and fall from power; the Houses of Lancaster and York (whose symbols would be chosen as a genus of rose: one red, one white). The end game would deliver us, into the 1500’s, the Tudors (as in Henry VIII; Mary; Elizabeth I), the era through which Shakespeare lived.

In these Histories, some come out smelling of roses (so to speak), triumphant. Others fare less well and have been cast in history as ‘baddies’, their reputations dragged behind them through history ever since.

Amongst the most infamous of these is Richard III (Richard, Duke of Gloucester of the House of York). He gets a really bad press in history and, particularly, by Shakespeare:

“…the wretched, bloody, and usurping Boar (that spoiled your Summer Fields, and fruitful vines)..”
“..this foul Swine…”

Accused of all sorts: usurping the Throne whilst Regent for his boy nephews, one the rightful King, Edward V; probably murdering them both in the Tower of London and hiding their bodies (‘the Princes in the Tower’); illegitimately claiming the Crown for himself. His physical description simply adds to the sense of being a “bad ‘un”: a crooked back, a hunchback (physical defect was not a good thing in the 14th/15th Centuries).

[Richard III’s heraldic standard: the Wild Boar (which would play straight into Shakespeare’s hands!) and the white rose of the House of York]

He was to come to a sticky end at a famous battle in Leicestershire in 1485: the Battle of Bosworth Field. His nemesis, Henry Tudor, son of the House of Lancaster who had returned to England from exile in France to reclaim his lands and possibly make a bid for the Crown of England for himself. This was the last battle of the Wars of the Roses and delivered us the Tudor dynasty: Henry Tudor became Henry VII; his second son would become Henry VIII (and on they go from there). It would also give us the floral symbol of England to this day: the red rose, symbol of the House of Lancaster.

As I grew up, local history has Richard III staying in Leicester the night before Battle. On riding out of the city the following day, to fight for his Kingdom, he meets an old crone on West Bridge who quips to him that his return would be over the back of a horse, his head banging against the parapet of the bridge (i.e. he’s dead).

And so it turned out to be..

Of course, those who’ve read Shakespeare’s Play, Richard III, will know all about the Battle – Richard charging downhill, engaging in Battle and being knocked from his horse and killed:“..a horse, a horse, my kingdom for a horse..”

Local history again: Richard’s body is brought back to Leicester; he is buried in a local Abbey. However, later, at the time of the Reformation in England, the Abbey is dissolved, Richard’s tomb destroyed (they were often heavily jewelled so prime targets for plundering) and his bones ignominiously thrown into the nearby River Soar at West Bridge. A plaque on the bridge has always declared (approximate wording) ‘near to this spot lie the mortal remains of Richard III, last of the Plantagenets’.

A curve ball from history? 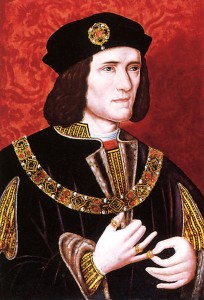 But interesting times are now upon us. There has always been a mystery over the remains of Richard (local history aside). Of course, if found, might they reveal evidence to confirm or deny any of the prevailing history of him of the last 500 years? Could this be a moment where history has to be revisited, a reputation restored, and one (William Shakespeare) even called into question? Think of the implications and it’s enough to get historians excited beyond belief and Shakespearean scholars possibly a little queasy.

Throughout this past autumn, in a car park in Leicester, there’s been some digging going on (how often does archaeology find itself in a car park!). Historians have, for years, been attempting to locate the precise location of Greyfriars Abbey where Richard was supposed to have been buried. And finally, they think they’ve found it. Having dug down through the centuries of Leicester on top, they’ve reached the remains of an Abbey Church and a tomb which, due to its position and other factors, they feel could be the one-time tomb of Richard III. Curiouser and curiouser, within said tomb are a set of bones; and a set of bones with the physical characteristics that had been attributed to Richard.

Could this, therefore, be Richard III? Might he never have been thrown into the river? Did he really have a crooked back? Is history about to be re-written? Within weeks we will start to have answers, for that amazing bit of science known as DNA testing is currently underway.

The historical (and possibly also, literary) debate may well continue in spite of what has been found. There are those who feel Richard has had a raw deal from history – after all, if you’re on the losing side, the victor writes the history which, in Tudor times with the risk of civil war, was a political necessity for Henry to have fully behind him so as to avoid internal strife. Henry would need to justify his claim to the Throne (apart from simply having killed Richard). Shakespeare, writing later in the Tudor era, could not have written anything that would have gone contrary to the orthodoxy of the time: the Tudor orthodoxy.

So historians and English literature buffs out there, I think a great debate awaits for you. Are you ready? Was Shakespeare right?