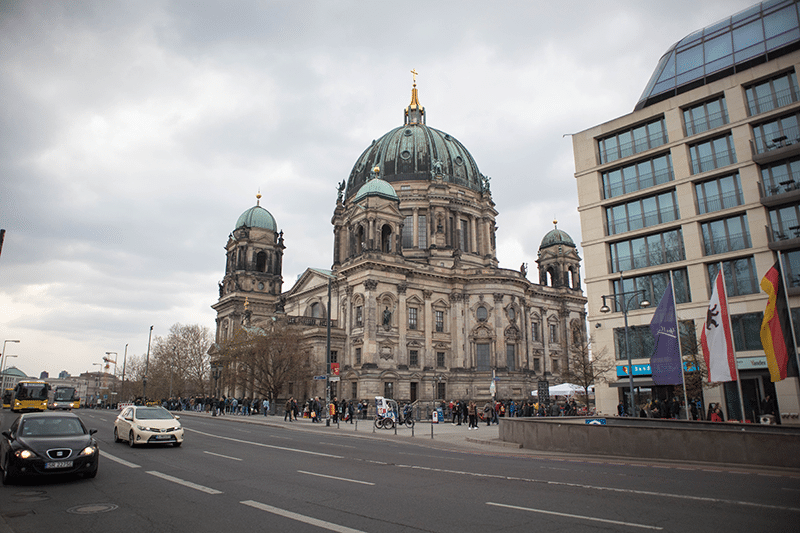 One of the most frequent questions asked of me as a Tour Manager is “Where is your favourite place in the world?” I never have to think on this as my answer is always, instantaneously, “Berlin!”

Born in England and then growing up in South Germany from my teens, I was lucky enough to live later on in life in Berlin itself for 12 years.

Berlin is the city that makes my heart light up and my pulse race with excitement. Not, I would add, because it is in any way the most beautiful city in the world (because it isn’t; in some places it is hideously ugly) but it is a city like no other in the world, steeped in history and incredibly vibrant. It is a city full of contrasts.

Throughout history Berlin has been, by turn and on many occasions, a place of refuge and a place of persecution. Examples of some of these would be the Huguenots fleeing from persecution in France in the 17th Century settling in Berlin, a place not only of tolerance and acceptance but of equality.

This is evidenced by the two identical cathedrals situated on Gendarmenmarkt; one built for the French Huguenots to have their place of worship and the other for the Berlin Lutherans to have theirs. A clear sign of harmony and unity.

Then of course there was the, much later, dark period in the 20th century where Naziism reared its head and large sections of society were persecuted for, amongst other ‘reasons’, their political and religious beliefs and also their racial origins.

Unlike other places in the world Berlin does not try to sweep this shameful period in its past under the carpet. Instead it recognises it and does its best to document these events in memory of the many people so unjustly treated and to educate future generations in the hope that the mistakes of the past may never be repeated.

Nine times the size of Paris with a third of the population, 44% of Berlin comprises woodland and waterways. So, whilst Berlin is in many ways typical of a bustling capital, very much unlike most other cities its residents never have to travel far to find themselves in relaxing green spaces and recreational areas and even sandy beaches.

It will be no surprise that, being the capital of a very meat-orientated country, Berlin is home to the creation of the Doner Kebab and also the internationally renowned Currywurst.

By way of highlighting a contrast, however, it is interesting to note that Berlin is the world’s No. 1 centre of Veganism with dedicated Vegan restaurants and food festivals whilst 10% of Berliners are themselves Vegan. Believe it or not there is even a Vegan cinema and a Vegan hotel!

Berlin is internationally renowned for Opera and it boasts no fewer than 3 opera houses. Classical music is part of the backbone of Berlin’s musical heritage and annually an open-air classical music festival is held and attracts music lovers from around the globe.

If however something more vibrant and colourful appeals to you then the Carnival of Cultures will be right up your street.

For those interested in ancient art Berlin will definitely not disappoint with its numerous museums featuring Greek and Egyptian artefacts. This contrasts sharply with the modern art you can find in the longest open-air art gallery in the world, the East Side Gallery; a nearly mile-long stretch of the Berlin Wall upon which 180 artists from around the world expressed their own interpretations of how they saw the world at the time through their artwork.

You may be admiring brick Gothic architecture on one street and then turn a corner and be confronted with Soviet Brutalist buildings on the next or, just as easily, a stunningly beautiful Art Nouveau façade. It must be stressed that the Soviets did not have a monopoly on questionable architecture as West Berlin also has its own shocking examples.

Regardless of your styles and tastes in life Berlin will certainly have something to offer everyone with its kaleidoscope-like contradictions.

One thought on “Spotlight on Berlin”