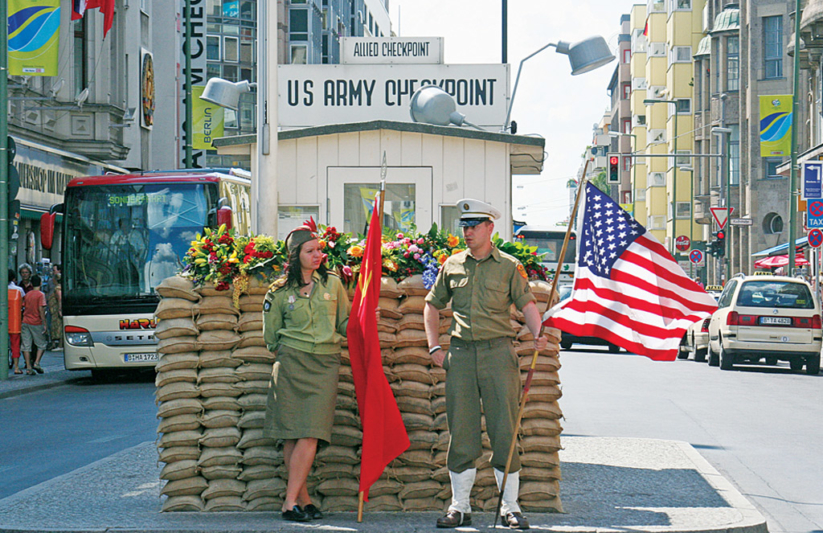 This Saturday, November 9th , marks 30 years since the fall of the infamous Berlin Wall, a structure which only stood for 28 years but left a great mark on the 20th century and on the lives of millions. Like so many man-made barriers, it only fueled people’s motivation to cross over and experience life on the other side. Each daring and ingenious attempt at escape only sealed the wall even more, as the GDR State continuously improved its system of surveillance.

Getting over the Berlin Wall wasn’t as simple as finding a ladder tall enough. Watchtowers with armed guards and vicious dogs surveyed it constantly. In most places there was a strip of land between the east-side and west-side walls, and this was booby-trapped with mines, trip-wires that set off alarms and automatic weapons, and sometimes 5-inch spike carpets concealed beneath the grass. But many people still attempted it, and official figures say 138 lost their lives doing so.

What other ways did people come up with to make their way illegally into West Germany? Here are some of the most daring examples.

Heinz Meixner was a young Austrian worker who fell in love with an East Berlin girl. Foreigners were given permits to move freely through the checkpoints in the wall, but their cars would be searched, so hiding his fiancée and her mother in the car boot would have been useless. Instead, Heinz came up with a simple but daring plan. He found an open-top car with a removable windshield, which meant that his car could be low enough to pass underneath the barriers before the guards stopped to check it. He was lucky. The guards took a few seconds to realize what was happening and open fire, and by that time, Heinz and his love had sped to the West. Shortly thereafter, the barriers were all modified and spikes added below.

Other car-hacking techniques included modifying the fuel tank to fit a person inside, building hiding spaces into the back seat, and even strapping a person underneath the vehicle!

You might think that swimming 50 meters across Berlin’s river Spree would be a tempting way to escape to the west side, but the east bank was paved with obstacles, and East German border guards installed spikes just below the water’s surface and patrolled the river, day and night. The most successful escape by water took place when the crew of the Freidrich-Wolf cruise ship planned a mutiny to get to the West. They gave the captain too much schnapps, locked him up, and brought on some of their friends, disguised as maintenance staff. As they turned the boat sharply off course and sped towards the West, the GDR coastguards gave chase, firing over 100 bullets in their direction. Some of these hit the western shore, and the West German police responded with shots, so the pursuers turned around. All 14 passengers, including a baby, safely reached the other side.

Another ingenious nautical escape involved a diving instructor who built his own miniature submarine and reached Denmark after a five-hour voyage.

Get Smuggled in Fake Cases

Ute Schmalfuß was a 19-year-old East German girl who fell in love with a Frenchman, but was denied permission to travel. She risked prison, but would do everything in her power to be with Jean-Pierre… So she secretly climbed into a train headed to West Berlin, in which Jean-Pierre and his friend Charles were waiting with two empty suitcases, engineered to fit her inside. She spent 70 long, nail-biting, and very uncomfortable minutes lying above them in the luggage rack as GDR officials checked everyone on board. But, like a magician’s assistant, she emerged on the other end of the journey unharmed and free.

A similar contortionist trick involved a female artist who folded herself into the loudspeaker cabinet of a visiting Dutch singer. This proved to be another love story as the two were later married.

Take to the Air

Sometimes, TV documentaries can be a real inspiration! This was the case for aircraft mechanic Hans Peter Strelczyk and his friend Gunter Wetzel, who decided to build a hot air balloon after watching a program on the history of ballooning. They did their research and built an iron platform with four gas cylinders in the center, while their wives stitched together 60 different pieces of canvas and bedsheets to form the balloon. On July 4th 1979 they lifted off, but the winds were wrong and their first attempt failed. A few months later, they tried again, and this time, both families, including four children, landed with relative ease after a 30-minute flight, right into a blackberry thicket in West Germany.

Other high-flying escapades included a trapeze artist who scaled an electricity pole and escaped across a disused power cable, and a man who zip-lined his way to the West in 1983, and then went back years later, flying an ultra-light fake Soviet plane into East Berlin in 1989 to get his brother out.

Many attempts were made to flee East Germany via railway: hiding in, under, or on top of trains. But only one man managed to take a whole train-load of people to the West. Harry Deterling, a train driver, had heard about a still-existing railway line linking Albrechtshof station in East Germany to the western rail network. He realized that although obstructed, the line had not been dismantled, and the switches still worked. One night, 18 family members of Harry and his colleague Hermut bought tickets for the train journey, which was supposed to end at Albrechtshof. Instead, Harry cut the emergency breaks, and the passengers nervously held on to their seats as he smashed his way into West Germany. Thanks to Harry’s daring, five entire families reached the West on a renegade train ride. The railway line was destroyed the very next day.

You can learn about many more successful escape attempts from East Germany and even see the escape apparatus if you visit the Checkpoint Charlie Museum in Berlin.