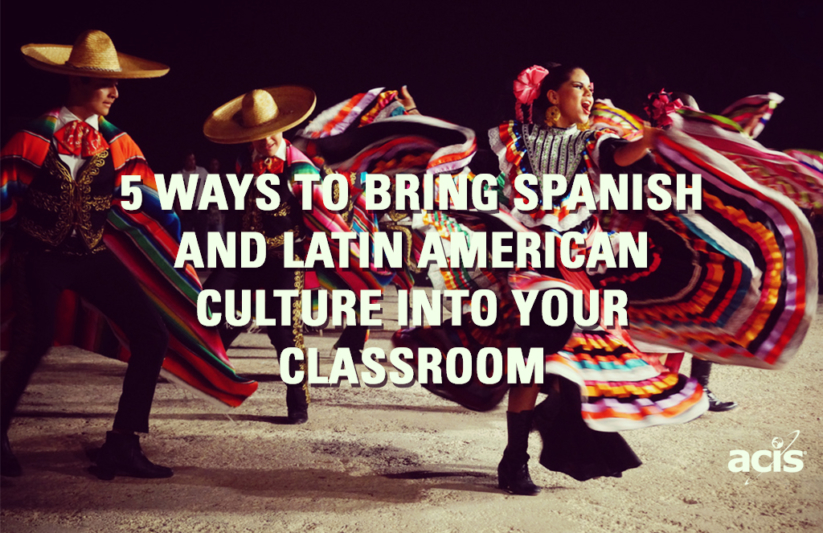 For Spanish teachers, teaching the language is just the beginning. Once your students can express themselves in Spanish, the next step in their journey is learning about the culture from which the language comes. The Spanish speaking world is large and diverse with many perspectives and cultures to explore.

Helping teachers bring the world into their classroom is our mission at ACIS. Helping educators show their students how big and diverse the world can be is the driving force behind everything we do. We hear from teachers all the time that their trips abroad with us allow them to accumulate knowledge, experiences and material objects that they bring back with them into their classrooms. The subject matter they’re teaching transforms from an idea of a place, person, or thing and into something they’ve touched, tasted and experienced for themselves.

When it comes to music and dance, few regions of the world have a more celebrated and influential cultural history than Spain and Latin America. While Flamenco has become synonymous with Spanish culture, Latin America has a hugely diverse array of dance traditions to explore: Salsa, Meringue, Bachata, Tango, and Rumba (just to name a few) all have their own distinct cultural significance and history that often involve cross-cultural exchange between Spanish and English speaking cultures. Studying a country’s music is a portal into its history delving into generations of issues concerning politics and class. Whether it’s Chicha music from Peru, Cumbia from Columbia, Bolero music from Cuba, or Conjunto music from Mexico, learning how musical forms came to be associated with different regions is a fantastic way to learn about the cultural backdrop of a nation.

Another exciting way to learn about Spanish and Latin American culture is through their food. Each country has its own distinct culinary culture and in many cases, there’s a great deal of diversity within a given country (just staying in Spain can provide a delicious culinary adventure that covers a wide variety of styles and dishes). Food not only is fun and universal, but like music, it provides a window into the history of a given country. Explaining to your students why Peruvian food features many different kinds of potatoes, or why authentic Mexican food is actually nothing like what you could get at Taco Bell will be an enlightening experience for them. It might be just the thing that inspires their first trip abroad to have their first taste of paella!

When Ernest Hemingway wrote The Sun Also Rises, he shined a spotlight on The Festival of San Fermin, and the running of the bulls has been forever ingrained in the American psyche as a part of Spanish culture ever since. Spain and Latin America have dozens of holidays and festivals that introduce different facets of their religious and cultural history to students in a fun way. November 1st and 2nd-Dia de los Muertos in Mexico, September 15th-Independence Day in El Salvador, Costa Rica, Guatemala, Honduras, and Nicaragua, October 12th-Dia de la Raza across Latin America, and March 19th-Las Fallas in Spain are all different cultural events with revealing historical significance. Celebrating any of those holidays or festivals provide a great way to add some celebration to your curriculum.

There is a long rich history of visual artists throughout Spanish and Latin American history that similar to music, reflect the political and cultural history of the cultures from which they come. Spain has produced some of the world’s most famous visual artists like Pablo Picasso, Salvador Dali, and Francisco Goya, but Latin America has also produced world-class artists like Frida Kahlo, Diego Rivera, Fernando Botero, and José Clemente Orozco (just to name a very select few). The art of Latin America reveals a variety of insights into the colonial and post-colonial history of the region while Spanish art over the years also has reflected the diverse influences from political movements, religious institutions, and more.

Lastly, one of the best ways to make a connection with a culture is to connect with the very people who make the culture what it is. Participating in a cultural exchange with a school in the Spanish-speaking world is a phenomenal way to connect with culture in a real-world, personable way. Instead of studying culture from an anthropological perspective, your students will be able to experience in through empathy and exploration. They could send letters, artwork, donations or their own cultural traditions with students their age. Making the connection that people with different cultural viewpoints have more in common with them than they have that’s different builds tolerance and awareness.

Cultivating a sense of togetherness and unity is why we encourage cultural exploration of any form. As the world grows smaller and smaller, it’s becoming more of a pressing matter every day.

How do you introduce your students to Spanish and Latin American culture? Let us know in the comments below!