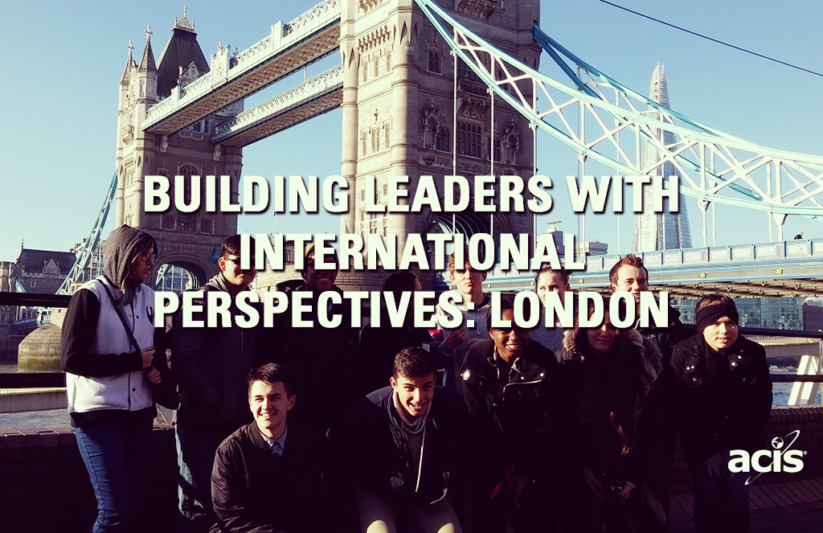 This guest post contributed by ACIS Tour Manager, Paul Daley, recaps the experience of a group of ACIS travellers on an International Perspective Tour in London, England. Students from Alcuin School in Dallas, Texas met with an entrepreneur to see first-hand what international business is all about.

For 2000 years trade has been the reason why London has flourished. Until very recently that trade was predominantly in physical goods, leaving the Port of London and the docks of the east end bound for the British Empire and beyond to all points around the globe.

The smoke and pollution of the 19th century has disappeared to be replaced with a trade of a different kind: innovation in technology. In particular FinTech – financial technology – has flourished in the areas that once were docks and factories. The location provides cheaper rents, and yet it’s less than a mile from one of the world’s greatest financial centres.

London is leading the world in tech start-ups. At a conference in February 2016, the bold claim was made that London would soon supplant Silicon Valley as the world’s tech capital. The statistical evidence to back up such a claim? Government data that shows in 2015 alone 196,146 tech ventures were launched in the capital.

So with the first ACIS International Perspectives London tour of the season, we left behind the iconic London tourist sights of the Tower Of London and Tower Bridge, although not before taking a quick group shot, and made our way to Tobacco Dock for our entrepreneurial meeting – with the founder and CEO of not one but two companies that have the major financial houses sitting up and paying close attention – Arjun Hassard.

Arjun is a graduate of Imperial College London and Kyoto University, and even though still only in his mid-twenties, he is now regarded as a worldwide leading authority on collective intelligence or as he called it “the wisdom of crowds”. That is in part due to his skill in creating a system to mine relevant data sources, but also, as he freely admitted, that this area is so new that there are only a handful of people who could be classed as experts.

One of the major points highlighted during Arjun’s talk was the necessity to recognise innovation and development that might not have been in your original vision. Through his first company, Myriada, the hope was to provide better guidance via statistical collective intelligence to major financial institutions. The big idea was, and continues to be a good one, but how do you put a price on it? What are you selling? Yet at the same time, his student interns were using the system to help to quantifiably display to future employers that they had the edge over fellow applicants. Arjun recognised the potential in what was happening, and Talent Rank was born. This occurred just a few months ago, but the format created has already been incorporated into the curriculum of Imperial College and University College London.

This meeting was a great example of Global Citizenship in our new itineraries. Talent Rank’s format allows for greater diversity of candidates to get that positive initial attention from major employers. Indeed, Arjun has taken that a stage further by setting up a not-for-profit organisation called Student Women in Business Consulting and Finance where the primary aim is to see a better gender balance in business. But even in the meeting itself, we could see how our students were engaging as global citizens. Arjun interacted with these 10th-grade students as though he considered future entrepreneurs to be in the room providing tips on what to do when, not if, they created their own company. And in so doing the students responded with insightful and thoughtful questions with regard to both the specifics of his two companies and also broader concepts thrown up by his talk.

For the Alcuin School from Dallas, this entrepreneurial meeting had been one of the main factors for opting for ACIS and this particular itinerary, the points raised in a meeting room in the east end of London will be taken back and expanded upon in their Texas classroom.

If this is something that you believe would benefit your students check out the full itinerary for our new International Perspectives London tour.