In the third and final post on walking through Rome, ACIS travel supervisor and local Roman guide Carlotta Boldrini picks up where Part 2 left off and shares an evening with ACIS students in Bella Roma.

After a long of day of learning (And walking – My feet feel like stones!), we still have not seen the biggest piazza in this part of Rome, Piazza Navona. No trip to the city is complete without a visit to this must-see place, and it is only a short way from our restaurant. Andiamo!

From our Pee – tzeh – riah, we go across a large avenue named after the 1st King of Italy, Vittorio Emanuele. It is a busy road, with cars and buses but also many people. Maybe they are all going where we are, who knows!

Our Tour Manager takes a little detour because she says that on the way to Piazza Navona there is another similarly famous piazza, which is adjacent to another piazza (so many!), where we can see a building designed by Michelangelo.

After just a few steps, we arrive in the first of the two piazzas, the Campo dei Fiori. Romans simply call it the Campo because in ancient times, before the square was laid out, the area was just a grassy field (campo) full of flowers (fiori). 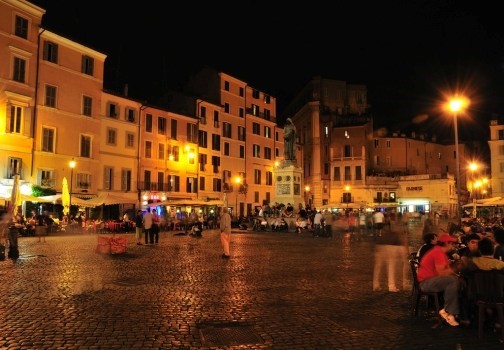 This is where Romans congregate at night. Lots of people sit at cafes and restaurants around the square, enjoying the evening. It is nice, full of life, but there is a somewhat gloomy statue looming from the centre.

It is the statue of a monk named Giordano Bruno. During his life in the 16th century, he had come up with some strange ideas that the Popes in the past were not very happy about, particularly his questioning of the earth as the center of the universe. In the year 1600, The Roman Inquisition found him guilty of heresy against the church, and Bruno was burnt alive at the stake in the place where we now see his statue. It must have been horrendous. The statue was erected only a little over a century ago and was purposefully placed to look toward the west side of the square because that is the direction of the Vatican, as if to remind the Pope that one of his predecessors was responsible for his death.

Tonight we can see the square in full movida (swing), but in the morning it will be filled up with the colourful stalls of a fresh food market. The items can be very expensive, but the market is still so famous that many, many people come here to buy their foodstuff.

Perhaps, tomorrow morning we will be able to pop in. One can only imagine how noisy it gets with so many Romans trying to buy food!

We continue on and reach the piazza next door, and you may be surprised by the difference in human presence that exists between these two squares, even if they are so close to one another. There is hardly anyone here!

The square is so nice and quiet. At its opposite end there are two fountains where water gushes into tubs that were taken from some thermals baths, the sort of early spas that filled Rome in ancient times.

From the street that stretches on the right of the Campo we can see the backdrop of the adjacent square – a big and beautiful palace with a flag on top of the main balcony, and a façade illuminated in the yellowish hue of street lights. This is Palazzo Farnese. The flag we see is French and is there because this is the seat of the French Embassy in Italy. As we approach the building we can also peek through the main window to see a fully decorated ceiling, all nicely illuminated. 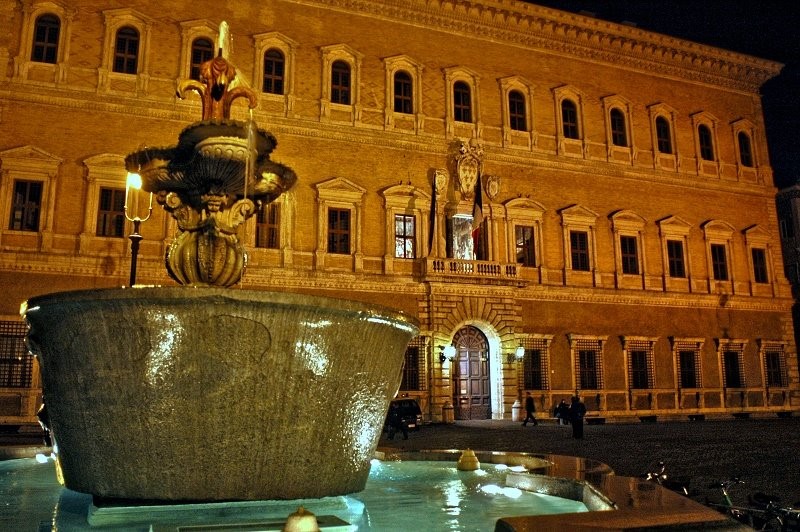 The Farnese were an important family that reached the highest level of power when one of their sons became a pope, under the name of Paul III. Actually, before then he had been a lay man who’d never really embraced religion or worshiped much but, thanks to the sensuality of his sister, Giulia the Beauty, who became the mistress of another pope, he was able to become cardinal! (A spicy story indeed!)

When he became pope, his family bought a space in this square and had a first building erected, but it was incomplete. Since Paul had become close to Michelangelo, who at the time was painting the Last Judgement for him in the Sistine Chapel, he had the artist finish off the decorations and the façade of the building. It is really very beautiful, with a sense of harmony and well balanced proportions.

The Romans have a nickname for it too, the Farnese Dice.

We retrace our steps now, across the Campo and the Corso Victor Emmanuel until we walk along a narrow street called Cuccagna. The word comes from the greasy pole contests held during fairs, where participants attempted to climb up slippery posts to grab hanging prizes – usually food stuff such as sausages, ham and salami.

The street opens onto the main goal of our nightly walk, the vast and beautiful Piazza Navona! 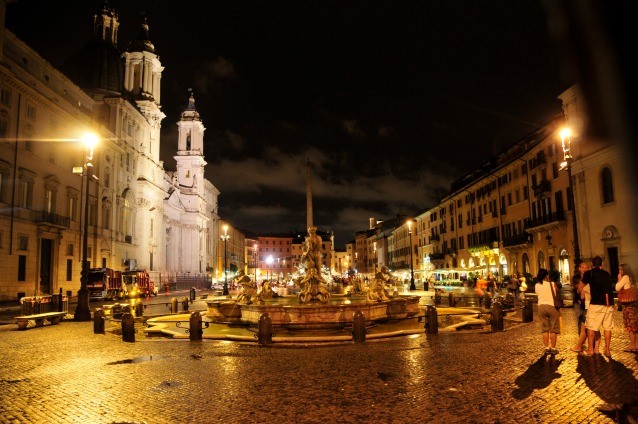 Navona is a quirky name: in Italian it could mean “big ship,” but there is no ship involved in the square. In ancient times the site was instead a big stadium where they would hold sporting competitions. Competitions involve “agonism,” and that in Latin was known as “agonis,” so with the evolution of the Italian language “agonis” became  “agona” > “Nagona”> “Navona.”

And guess what? A “Piazza Navona” exists only in Rome!

The square is immediately recognizable on the map because it has kept the same space and layout of the ancients stadium. Our Tour Manager shows us some pictures of “before and after:” 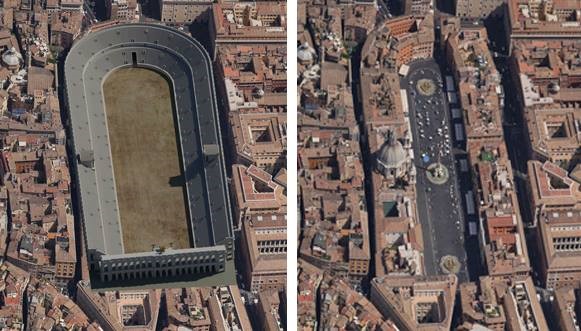 The stadium cannot be seen as it is located underground and has become the foundation on which present day buildings stand. What we can see is a lovely place full of light, people, painters selling their arts, jongleurs, mimics, living statues and the ever-present street vendors.

Piazza Navona is the place to eat the best chocolate gelato ever at the famous Bar Tre Scalini (The Three Steps)! Their specialty is a ball of chocolate ice cream with dark chocolate crumble called Tartufo (Truffle). 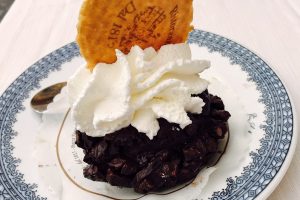 It is gigantic and yummy: Well worth the €5,00 that you have to pay for it.

We spend some time in the square. Some of us can have a caricature of themselves done by the local artists, others walk around and enjoy the night air before coming to the established meeting point. It is time to go to the hotel and crash in our beds.

We have to walk for just a few minutes to reach our bus, so we exit Navona from one of its ends and walk past bars and restaurants looking out over the river banks.

At the opposite side of the river we can see a massive building. The architects must have quarried a whole mountain as big as it is! This is the High Court of Justice otherwise nicknamed the Palazzaccio (the bad palace). Why justice would be considered a bad thing is strange indeed. 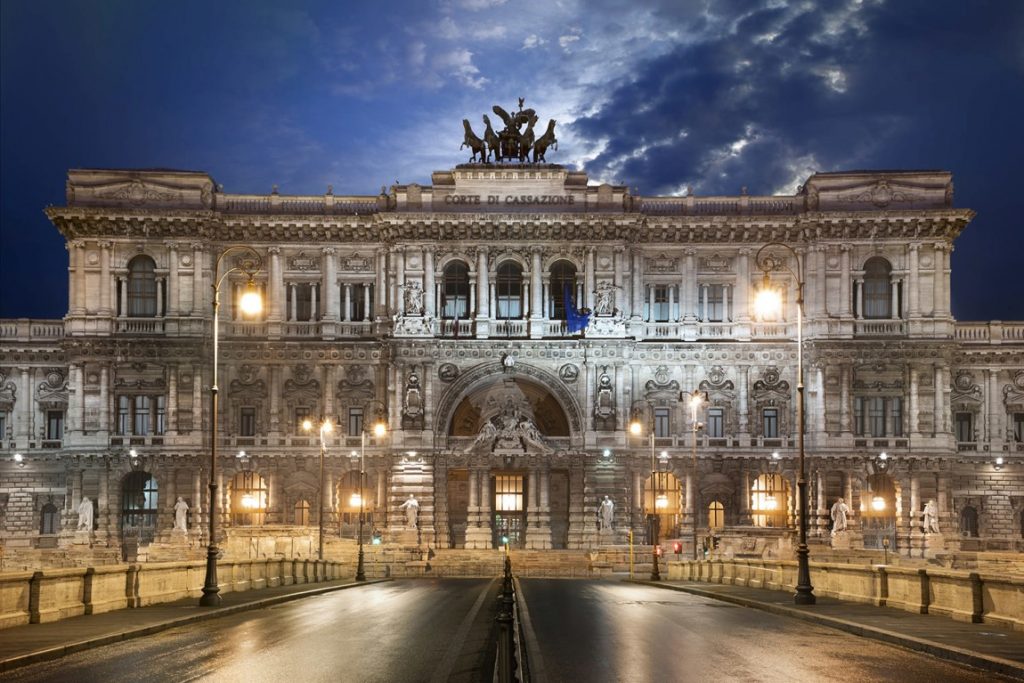 We finally can see our bus and driver waiting for us: it’s time to head back to the hotel. We are tired but happy; we’ve seen a beautiful country where we have learned so much and done so many things together. We have seen beautiful cities, eaten great food, tightened our friendships, and everyone is already thinking of the day we will have a pizza party at home to share pictures and memories of the trip.

Our Tour Manager told us that travelling has changed her life and that is the reason she is so passionate to share a new country with students, still young and with so many places and things to explore. I did not know how true this would prove to be, but I totally agree with her now: Travel Changes Lives!

Before I close my eyes, I have one last chance to look out of the window and take my last view of Rome, the Eternal City.

Arrivederci Roma, may all of us cross paths with you again! 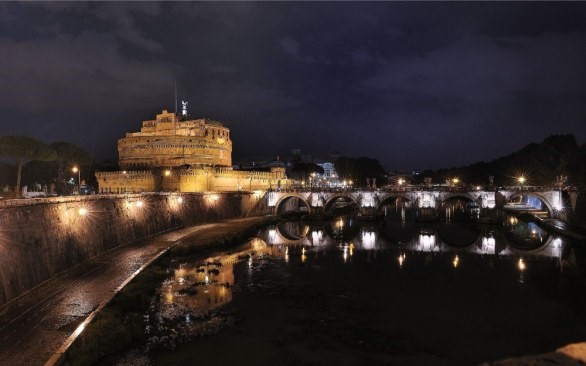 One thought on “An Ideal Walking Tour of Rome Part 3”