Every community celebrates the coming of the new year in a special way. Here are 6 traditions that you may not know of from countries around the globe.

In Greece, a very special cake is made on New Year’s: Vasilopita. It has one unique ingredient that Greeks don’t use for baking any other time of the year – coins! A single coin is baked into the cake and the lucky person who finds it will be blessed with luck all year. If that’s not enough good fortune, they receive a prize, too.

Many other Europeans share this tradition of New Year’s Cake baked with a special token. The Spanish bake a plastic baby Jesus into their Roscón; the Portuguese enjoy bolo rei; and gallete des rois is the French “King of Cakes” that contains a bean hidden inside. However, the Vasilopita is different from other Three Kings Cakes because Greece is the only country where your yiayia fixes the cake slicing so that her favorite grandchild “randomly” wins the coin every year.

On December 31st in Scotland, the word of the day is Hogmanay! The day is thought to have stemmed from the Viking tradition of passing the solstice, though . Children typically receive an oatmeal cake, which is why you may hear it called Cake Day as well, and there are great parades in the streets with participants singing, dancing and even swinging great balls of fire. After midnight chimes it is tradition to sing “Auld Lang Syne,” the poem penned by the great Scottish poet Robert Burns. Back at home, the “first foot” to step across the threshold at midnight is a sign of things to come – good or bad! Typically, a tall and dark haired person brings fortune, though if you’re fair haired, a gift of whiskey, coal, or silver coins will make things right.

The Spanish are no strangers to the traditional champagne toast on New Year’s, but they also enjoy their bubbly with another special food: white grapes. The custom of eating the “twelve lucky grapes” dates back to the 19th century, during an unusually productive harvest year of grapes in Andalucia. Now, thousands of people gather at midnight in La Puerta del Sol in Madrid to eat the twelve grapes. The key to success and a year of good luck means finishing the grapes by the last bell chime (about one grape every 3 seconds). Some consider it cheating, but removing the seeds and peeling the skins will help you eat more quickly!

Unlike the Spanish, who stay out late on New Year’s, the special part of January 1st in Japan is waking up early. Hatsuhinode is the welcoming of the first sunrise of the year. The Japanese rise before the sun and navigate in the dark to find the perfect spot, like a beach or a hilltop, to catch the first light of the new year. They see this as a time to pray for prosperity, health and good fortune. 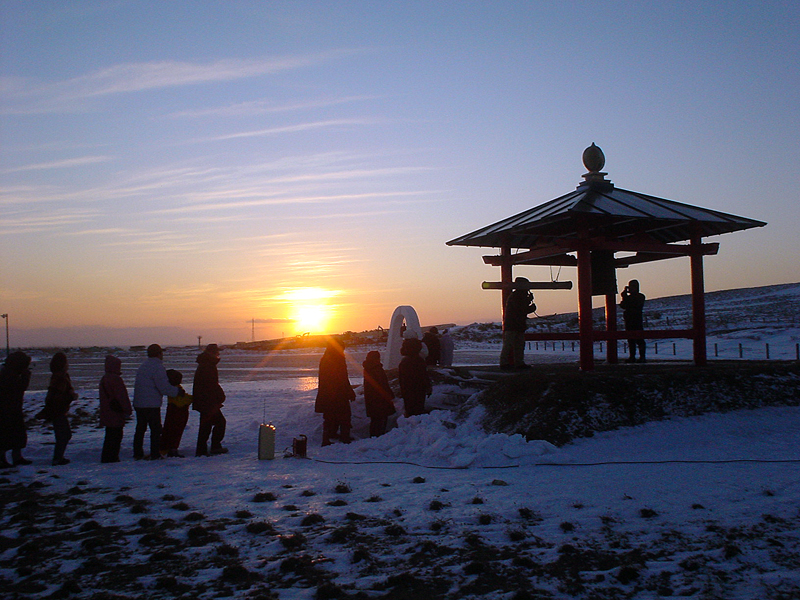 Filipinos enjoy public displays of fireworks, but they also like to make their own fun by blowing up fireworks in their neighborhoods. No drivers dare to get behind the wheel as the streets and driveways are filled with smoke and fire. It can get so smoky that most people wear masks while enjoying the celebrations. It can get pretty wild in the Philippines… the news on January 1st usually covers the number of people who accidentally blew off their fingers during the celebrations from the night before.

There are many other traditions that Filipinos like to follow: eating long noodles for dinner which represent a long, prosperous life; keeping the doors, windows and cabinets open to let out evil spirits and welcome good fortune; and (my personal favorite) jumping at the exact moment of midnight to help spur growth. That last one’s not scientifically proven, but it’s worth a try!

Not only is New Year’s in Korea a huge party because of the fireworks and midnight celebrations, but it’s also the day that everyone celebrates their birthday. No, they don’t host a nationwide birthday party and all blow out the candles together, but they do all legally change their age on January 1. As opposed to the international age system of turning a year older on the actual day you’re born, Koreans all use January 1 as their legal birthday. Therefore, a Korean person could have been born on the same day and year as you, but could legally be two years older* than you…  Makes you feel so young, right?

*This is because on a baby’s day of birth, they are already one year old. For example, a Korean baby born October 1, 2018 is considered one year old starting on October 1st until December 31st, 2018. Then on January 1st, 2019, the baby legally turns two, while a baby in most other countries would be three months old.

How do you celebrate the New Year? Tell us in the comments!