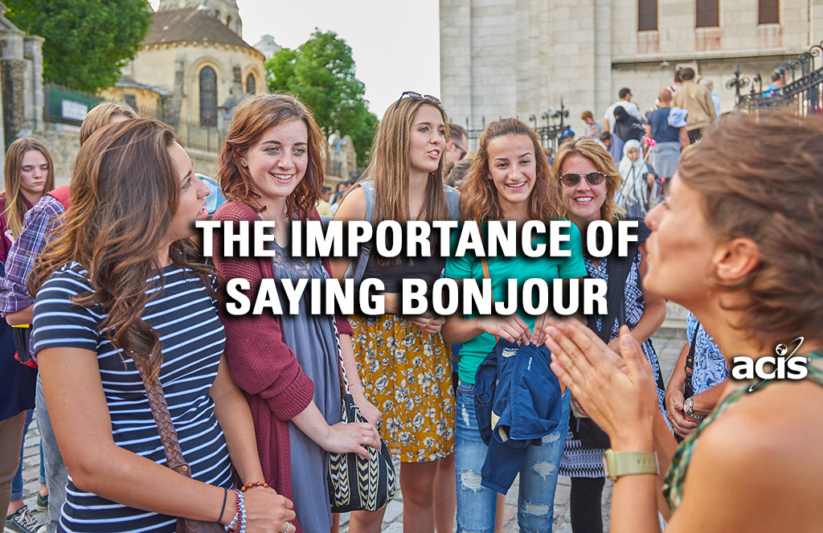 If you’re contemplating a school trip to France anytime soon, there are a few key phrases you should probably learn. ‘Bonjour’, ‘merci’ and ‘un café américain et un pain au chocolat s’il-vous-plaît’ are all good places to start.

It’s important not to expect people to speak English to you; language teaching is notoriously bad in France, and the average Frenchman won’t be able to string together a coherent sentence in English. Unlike in some other European countries, TV shows and movies are mostly dubbed into French rather than subtitled, and English classes consist of memorizing irregular past tenses rather than doing something useful like communicating.

But if you’re in France and you know a few basics, you can start going out there and speaking to some locals. It’s true, some cities (I’m looking at you, Paris) have a terrible reputation for unfriendliness. I didn’t fully understand this stereotype until I went and spent some time in the American Midwest, i.e. the friendliest place in the world. It really opened my eyes to how other cultures can perceive the French attitude as downright rude, so here are some pointers to help you navigate the French public sphere.

DO I KNOW YOU?

You’ll find that people in France may be a bit reluctant to talk at length if they’ve only just met you. They don’t chit-chat on the bus, they avoid all eye-contact on the metro, and any unavoidable verbal exchange with strangers (like when ordering food or paying for purchases) is limited to its strict minimum.

So don’t expect the cashier to ask you about your day and, de Dieu, don’t start complimenting people in the street on their choice of footwear… The only place where a more advanced form of friendly exchange is acceptable is at the market, where everyone is bumping into each other and exchanging recipes, and where sellers will recount all sorts of tall tales to get you to buy their turnips.

Even if all you have in your repertoire is “Excusez–moi, vous parlez anglais?”, say something in French. There is nothing more infuriating to a Frenchman than a foreigner’s presumption that his or her language should be spoken in the République. They will forgive you your lack of fluency as long as you give it a shot. If you are in an urban area and approach someone younger-looking, then you probably have a better shot of coming across a person who can give you directions to the nearest croissant.

Many a time have I been curtly reprimanded when starting a conversation by saying “Excuse me, could you please blah blah blah”, only to have the other person reply “Well I can if you first say ‘hello’” or indeed just stare directly at me and firmly reply “Bonjour” to my request. Because you see, it doesn’t matter whether you are addressing a shop assistant or a bus driver, whether they are serving you or not, the very basic human right in France is to be recognized as an individual with a simple “bonjour”.

And it’s not just a quick “Hi!” at the beginning of your sentence; it is an introduction, it requires acknowledgement and reciprocation before a proper conversation can begin, even if that conversation is just “Where can I find the beans?”, “They’re in aisle 5”.

So don’t stress, just practice some key phrases on the plane over, approach people with a smile, say “Bonjour!” in your best French accent, and you’ll be fine. And if, after all that effort, a stuffy Parisian still avoids eye contact and rushes past you, just remember, it’s not you, it’s them.

Planning a school trip to France, have a look at our programs here.

2 thoughts on “The Importance of Saying Bonjour: A Guide to Speaking French in France”