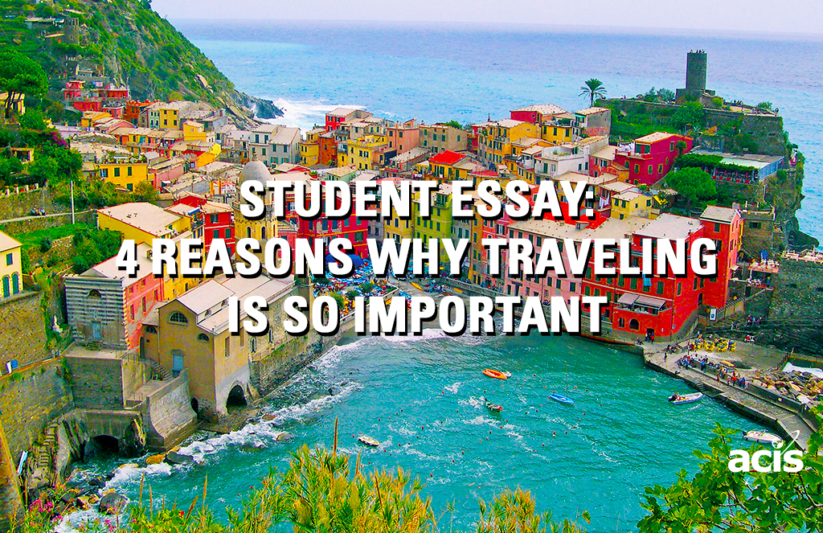 This article was written by Connor Edward McGrane upon his return from Greece and Italy this spring. He writes about how his trip abroad changed his perspective and helped him gain a global perspective.

Last week I was incredibly fortunate to have the opportunity to travel to Greece and Italy. While traveling through these two beautiful countries, I learned many things. I learned the ancient city of Pompeii had a brothel, that the word “gymnasium” comes from the Greek word “gymnós” which means nude, and that the Romans used to fill up the coliseum with water in order to have naval battles. However, what I will take with me for the rest of my life from this trip did not come from a guided tour.

1. It Opens Your Mind

Traveling opens your mind because you begin to see how people do things differently than you and still get by. We become so accustomed to how we do things that we believe it is the only way, and that anyone who acts differently is inferior. Traveling changes this. From big things such as religious practices to small things such as how you order your food, traveling opens you up to all types of changes.

2. You Get to Experience Different Cultures

The most fun part of traveling is experiencing different cultures. New food, new music, new language, it’s so amazing how different it can be from ours. One feature of Roman culture I found interesting was that they air dry their clothes. In the United States, we would find this as a hassle since we like to get things done fast. However, the Italians value tradition. Neither is right, neither is wrong. Another interesting thing was how superstitious the Italians are.

Our tour guide provided us with a lesson on hand gestures not to make, as the Italians will take it as if you are casting the “evil eye” on them. Anti-evil spirit jewelry and decorations were sold throughout Greece. In the United States, we aren’t that superstitious, so it was amazing to see this. Trying different food was amazing as well. In the United States, we seem to think we are accustomed to all different types of food since it’s very easy to find a Mexican, Italian, Chinese, or Greek restaurant. However, these foods are quite different when made in their home countries. The true Greek Gyro had a much different sauce than the yogurt sauce used here and Gelato made in the states tastes like ice milk.

3. You Are Able to See New Scenery

One of the most amazing aspects of traveling to Europe is how different everything looks. Cobblestone streets, narrow roads, and tiny apartment buildings are all so different from what we have here in the U.S. Especially in New York City where the roads are long and wide, it was amazing to see streets where barely one car can pass through. The cars themselves were so much smaller. In the U.S., it’s quite common to see big SUV’s or minivans…not in Europe. Even the cities themselves were so much different. In the U.S. when we think of a city we think of something like New York City, huge skyscrapers, and buildings made out of glass.

This is what I expected to see when I traveled to Europe for the first time. Rome and Athens were nothing like that. There wasn’t a skyscraper in sight, and most of the buildings were extremely old. Here in the United States, everything seems so new compared to Europe. There was a piazza in Rome literally sitting on top of an ancient stadium. Our tour guide took us into one home in Athens where a man redid his basement to find a huge pot which was over 2,000 years old. The mountain ranges were also beautiful. Coming from Long Island, I have only seen a few mountains in my lifetime. Being in Delphi, a city in the mountains of Greece, was breathtaking. The mountains and valleys looked like they went on forever. They made the 4-hour bus journeys more enjoyable.

4. How Fortunate You Are to Live in the United States

If there is one thing I will never forget from this trip, it’s something the tour guide said to us. On our last day in Rome when saying goodbye to us, she began to talk about how important traveling is and how she hopes this trip has given us an urge to want to explore the world more. At the end of her farewell, she said “Even if you decide that you never want to travel again…Remember what you saw, and that you are all so lucky to have been born in the United States of America. America truly is the land of opportunity, a meritocracy. If you work hard, you will succeed. Never forget that.” This truly stuck with me and made me realize how lucky I am. How fortunate I am to live in an economic system that rewards hard work and innovation and encourages people to succeed.

A country which believes in individual rights and fights to defend them. A country where even our poor people can afford their own apartments, unlike the Romans, where the average person can only afford to rent a room in an apartment. I loved the look on people’s faces after I told them I was American. One woman asked me to take a picture for her, and upon hearing my accent asked if I was American. I said yes, and her response was “Wow!! You’re beautiful!” Afterward, I heard her say to her daughter, “He’s from the United States!!” It made realize how fortunate I am to come from such a great country.

Traveling is truly an amazing experience. I have learned a lot from the four European countries I have traveled to, and will continue to learn more as I further explore the world. Traveling doesn’t have to mean going all over the world, however. You can learn so much just from traveling to another part of the United States. The way people live in the south can be very different and interesting compared to here in the North. Even exploring the different boroughs in New York City will open your eyes to different cultures. As Ibn Battuta once said, “Traveling—It leaves you speechless, then turns you into a storyteller.”

Do you or one of your students have a story you’d like to contribute to the ACIS blog? We’re always looking for contributors, so let us know in the comments section below!