Florence remains one of those magnetic cities of the world drawing the fascinated, the inspired and the curious in their droves to itself.

After all, who can fail to be in awe of the likes of the Duomo – its scale hypnotic; Brunelleschi’s dome as captivating today as it must have been 600 years ago at its construction. Then there’s the whole ‘art attack’ thing – you are in the birthplace of the renaissance after all; the artistic riches the city holds for the world in equal stature to Brunelleschi’s creation.

Two absolute personal favourites remain the treasure trove that is the museum of San Marco, the former monastery which under the patronage of the Medici, saw its monastic cells decorated by Fra Angelico, amongst the earliest of the renaissance brilliance that subsequently took hold; and the Capella delli Magi in the Palazzo Medici-Riccardi, the onetime HQ of the Medici and, in one small chapel, a decoration of riches floor to ceiling: Tuscan views of its time; subliminal messages; action, it’s all there and you just need to linger in its presence to let it soak into your soul.

In Michelangelo’s famous son, David, kept warm and cosy by the Accademia, you can be captivated by the maestro’s skill – purity of sculpture, scale, and realism from something as inert as a lump of marble – found also in the preceding ‘Slaves’ seemingly crawling to life out of their marble blocks. Maybe in these, you begin to be in awe of Michelangelo’s total brilliance.

Wherever you visit in the city, particularly the churches, it is a constant reminder that what was done in the name of patronage and faith is now an ongoing living lesson in the history of art (and it’s all so utterly accessible!). 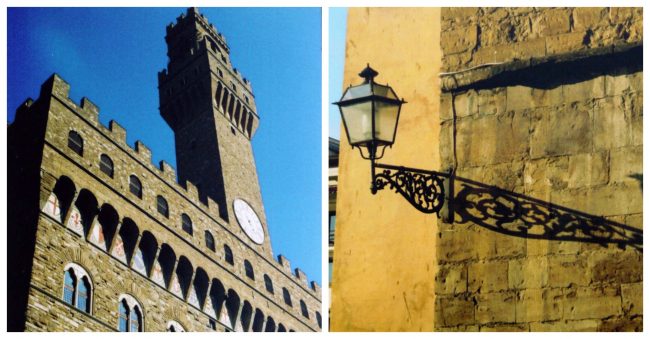 Walking the city itself can feel like a time warp, from its narrow cobbled streets to its medieval landmarks of power, the Palazzo Vecchio with its crenulated tower lauding it over the heart of the city, Piazza della Signoria; elsewhere the lurking mass of the Bargello. The heart of the city has seen it all across the centuries from celebrations to civic ceremonies, processions, and parliaments as well as the other: executions. Ignore the modern neon of shop signs and maybe you can still sense the throb of a medieval city through its cobbles beneath your feet.

For all the reminders of medieval city life, this is also modern Italy – modern chic for all in the network of city center streets; cafes; a city of markets, even today (including one of the trendiest spots to grab a quick bite to eat atop your fruit & veg shopping or tourist souvenirs)

Needless to say, you package this all together and you visit with the other reality: crowds! – the like-minded, as yourself, wanting their piece of Florence. 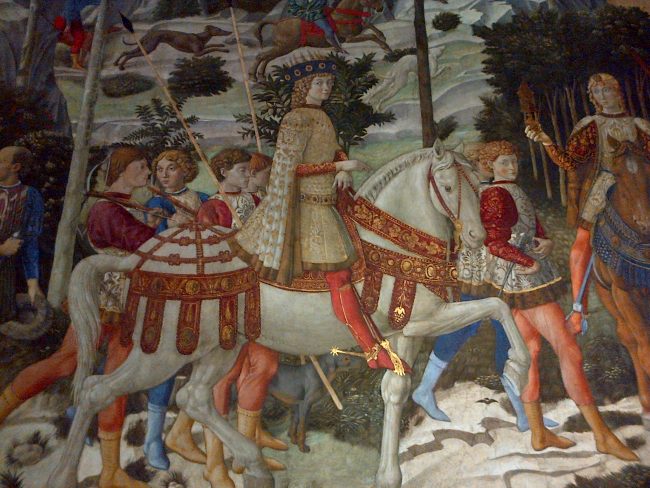 The city sucks you in; the cobbles and the stone, the ‘art attack’ and the queues; like any city you visit there are times you need, simply, to step back and refresh.

When the moment hits in Florence? Take a stroll outside those medieval city walls; up..and above the city to its southern outskirts. From here, you can gaze over olive groves and the cypress fir so associated with Tuscany down onto this captivating city. It’s your classic ‘Room with a View’ moment; a chance to reflect on the history the walls and streets of this city have witnessed across the centuries.

From here you see the city surrounded by Tuscan hills. In the morning, it’s a city bathed in the fresh sun of a new day; before sunset, the softening shadows of the sun cast themselves across the cityscape, a city of ages still dominated by its Duomo and the Signoria tower; the River Arno, the life-blood of the city, flowing with the last glints of sun on its surface and a sky of blue through to golden tints away to the west. 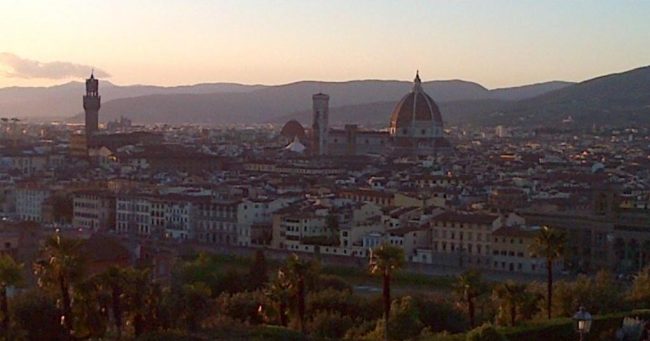 The most popular spot is Piazzale Michelangelo, with its steps facing westwards and the draw for the young crowd of Florence to wallow in the final rays of the day’s sun, chatting away, chilling with a guitar, sharing a drink sort of thing.

For the lesser-known spot and the more tranquil if you’re after it, stroll the short distance beyond to the steps of S Miniato al Monte. Here you can sit in front of the marble and golden mosaic frontage of one of Florence’s oldest churches (it dates to the beginning of the 11th Century and, to some, is the finest Romanesque structure in Tuscany). Here, with city views, the walls of medieval Florence winding over the hill opposite, your olive grove and all that you get to see lower down, it has to be, to me, the top place to chill out and refresh the parts that need refreshing!

From here, as the day’s sun softens in the sky, the sound of the Duomo’s bells can easily reach you, wafting on the air. It reminds you, above the hubbub that is Florence below, how the bells have called Florence to arms across the centuries. It is said that, in one chapter of the city’s history as Charles VIII of France was threatening Florence and its rulers, the retort from Florence came: ‘show us arms, we’ll ring our bells…’ Today, the threat of the bells and all that meant, is long gone, of course.

Once refreshed, it’s downhill all the way to re-immerse yourself in more of the city’s gems (with lesser known but quite trendy neighborhoods along the way, if you follow the steps – ripe for a cafe moment!).

What’s your favorite aspect of Florence? Let us know in the comments section below!