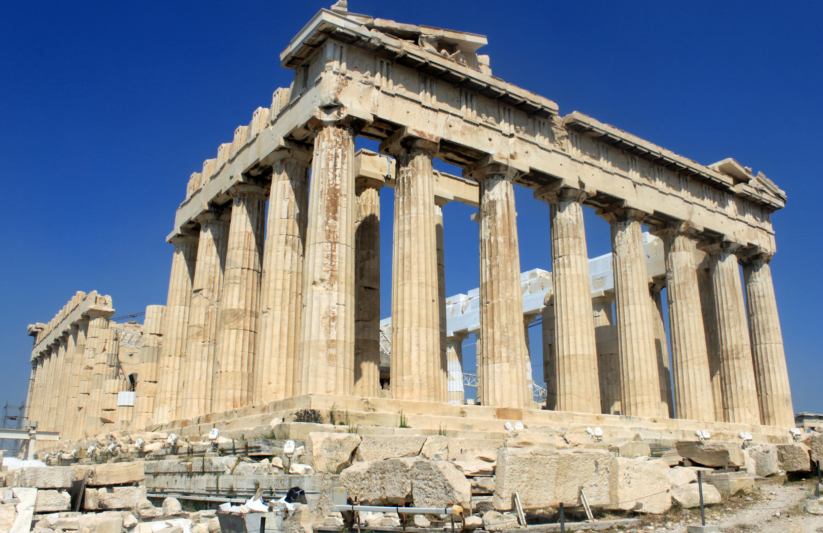 Sitting atop a sacred citadel, the Parthenon in Athens is a symbol of both classical art and political power. Its perfect forms have been imitated in countless buildings over the centuries, including the US Supreme Court. Over 2000 years ago, its construction took less than 9 years, yet the current restoration has been ongoing for over 30 years. Over time, historians and archaeologists have been unearthing new secrets about this ancient monument and taking a few pieces for themselves, not without controversy. Here are some of the Parthenon’s most fascinating secrets.

The lost sculpture of Athena

The Parthenon was dedicated to Athena, protector of the city, and it once contained a huge 40-foot sculpture of this Greek goddess. She held a sculpture of Nike, or victory, in her right hand, and a shield in her left. The structure was made of wood, the skin of ivory, and gold was used for her flowing clothes. These were all very expensive materials, mostly not even found in Greece, and the skills of many artisans were needed to build her. In the end, this mythical sculpture cost as much as as 200 war ships. Perhaps unsurprisingly, her golden clothing was soon melted down to fund more wars, and only a few small copies now remain. There are no plans to rebuild her, and if you go to the Parthenon today, you would never know her presence had graced this imposing place.

Once so bright and colorful

We think of Greek buildings and sculptures as being solid, white and solemn. The Parthenon was the first ever building to be built entirely out of marble, over 100,000 tons of it were used, and it once contained 360 sculpted figures. But what we tend to forget is that while marble stands the test of time, pigment often does not. It’s hard to imagine, but the white sculptures and somber architecture were once brightly decked out in blue, red and yellow hues. When European aristocrats and artists “re-discovered” Athens in the 18th century, they drew and painted these ancient monuments not as gray and white, but in the colors they imagined them to originally be. So the question facing us now is: do we restore them in color too?

A place full of illusions

The Parthenon was built with 46 tall columns and an elongated staircase leading up to them. But unbelievably, there is not one straight line among them. It seems the Greeks were masters at using optical illusions to give the impression of geometrical perfection. In fact, the columns were built to curve slightly outwards in the middle, and the staircases also bend downwards ever so slightly at the ends. Although the round marble blocks used to make up the columns all look very similar, when archaeologists tried to rebuild them during recent renovations, they discovered that each piece was unique and designed to fit perfectly in one specific place. No wonder this giant 3-D jigsaw puzzle made up of over 100,000 pieces has taken them so long to put back together.

Is the Parthenon really in Athens?

If you want to see the details of the Parthenon, you would expect to go to Athens, right? Well… not necessarily. You might be better off going to the British Museum in London, or even the School of Fine Arts in Paris. You see, all those aristocrats who went to admire the Parthenon didn’t just come away with sketches. Over time, everyone from British archaeologists to Napoleon Bonaparte took pieces of the Parthenon for themselves. Today, most of those intricately sculpted figures and the frieze are in the British Museum, where they are known as the “Elgin Marbles”, after the Earl of Elgin who removed them from Athens in the 19th century. And if you want to get right up close and personal with the images that once graced the Parthenon’s frieze, then the detailed reproductions of the reliefs can be seen for free all around the central courtyard of the Ecole des Beaux Arts in Paris.