Torn between getting a great photo and life, we ducked, cameras still held up, as devils with spinning massive sparklers sprinkled us with flames. Dragons and monsters breathed fire and incessant drumming drowned out the screams of the simultaneously petrified and enthralled crowd. Welcome to the ‘correfoc’, the fire run, one of Catalonia’s traditions which can be seen at not only bigger celebrations but also at some of the neighborhood festivals, such as in Gracia.

It is interesting to note that two of the most famous local traditions are somewhat life-threatening: ‘correfocs’ and ‘castellers’ (human towers). I often think about how the human tower tradition came about. Officially it began in Valls near Tarragona around 1712, but it always strikes me as something that a group of men, perhaps having consumed a few ‘cervezas’, sitting around on a rainy Saturday afternoon came up with. I can picture it now. Perhaps an early version of creating towers with empty beer cans. And yes, this is definitely a male thing; women weren’t even allowed to become ‘castellers’ until the 1980s. Spanish women live on average to 85 and a half years, whereas men to 79 and a half. These two facts are not unrelated.

The ‘castells’ tend to comprise burly men who form the base (‘pinya’) and lower levels and then smaller men and women who tend to form the upper levels with children acting as the ‘enxaneta’ who reach the top of the tower. A castell is only considered successful if it is both assembled and dismantled in an orderly way, i.e without it collapsing. As the upper levels are reached the band begins to play to denote that the tower is going to be completed. When the child reaches the top they throw up their hand to denote the ‘castell’ is complete and the crowd applauds and cheers.

They continue to do so until the ‘castell’ is fully dismounted. The colors denote where each group is from, for instance, the Barcelona ‘castellers’ wear red, whereas the ‘castellers’ from Vilafranca wear green. The all-important sash which is vital as it supports the lower back and also helps the people climbing up is put on by winding the ‘casteller’ into it.

The delivery of Spanish can bear more than a passing resemblance to a series of firecrackers going off and it should, therefore, come as no surprise that they have a distinct preference for setting these off for yet another celebration involving fire, that of San Juan. This fiesta, which takes place in June, often results in firecrackers being thrown at people sitting in the outdoor cafes or set off in the small streets, meaning that Barcelona can resemble Kabul on such days.

Once again, if there isn’t an element of scaring people to death or actual potential imminent death, apparently it’s just not a fiesta, Jordi. The Spanish, in their pursuit of pyromania, even opted out of the 2007 EU directive on the use of fireworks at fiestas; health and safety is a very secondary concern to the potential loss of fun.

The reason for the latest bout of playing with fire, La Mercè, is the celebration of Barcelona’s patron saint. Saints’ days are a frequent occurrence resulting in a healthy 13 days off every year in Catalonia (this is in addition to the normal four weeks of holiday). The southern Europeans are fond of making the ‘puente’ (bridge) to the weekend if a Saint’s day should fall on say a Tuesday or Thursday; they make a long weekend with the Monday or Friday respectively.

On some occasions, this ‘puente’ can seem more like a viaduct. La Mercè which is on 24th September, fell on the weekend, so the Monday was taken off. All over the city, there are celebrations, a fun fair, fireworks, parades, concerts and general partying lasting four or five days. The French may have coined the phrase ‘joie de vivre’, but it is the Spanish who truly embody this and whilst the Andalusians are known as the true revelers of Spain, I would argue that it is something common to every autonomía.

Another spectacle of La Mercè is the ‘gegantes i capgrossos’, the giant dancing figures that have formed part of the celebration since 1902. These are commonplace in Spain, but each ‘autonomía’ has its own versions to denote its own history and story. There is an element of the comical about it all, but also a surreal feeling as you watch these giants dance above the crowds.

What’s interesting about La Mercè this year is the backdrop of the very real heightening of tensions with the Madrid-based government in light of the forthcoming referendum on 1st October. The referendum is considered illegal by the Spanish government, as the Spanish constitution does not allow for it. However, Prime Minister Mariano Rajoy’s most recent actions, having Catalan officials arrested and ballot papers confiscated, is considered heavy-handed and reminiscent of Franco.

In the main square, Plaça Jaume, full of people celebrating the Mercè, signs declare that ‘Catalonia has the right to vote’, or ‘Catalonia wants to vote’ and everywhere there is the flag of Catalan Independence; its star denoting the ‘lone star’ state of Catalonia. City Hall is full of dignitaries cheering with the crowds and with a banner calling for ‘Més Democràcia’ (more democracy) hung from its window. When one of the children on top of a ‘castell’ unveiled a Catalan flag, the crowd, but also the dignitaries watching from the balcony of the city hall, roared in approval and chanted ‘We will vote’. 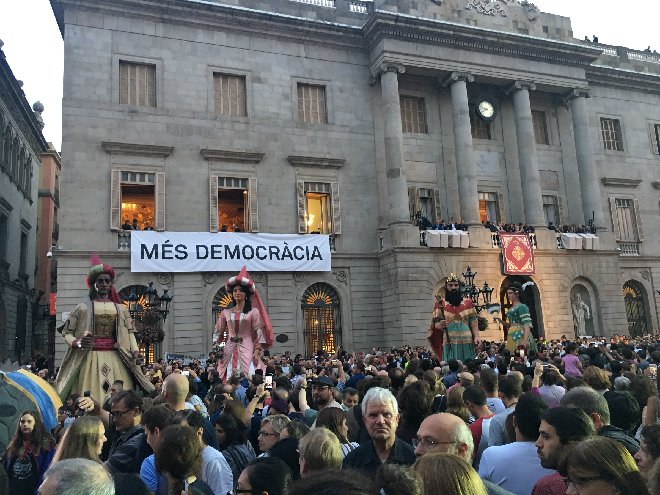 From the building of the Generalitat, the Spanish flag flies. On the other side of the square and all around, the Catalan flag is much in evidence. The people below, are in the no man’s land. Some are pro and some against Catalan independence, but the majority are in favor of at least being given a chance to say either way.

It would seem, therefore, that whilst everyone watches the dancing giant figures and applauds the spectacle of the human towers, the real action is taking place backstage. Indeed, perhaps it is not the giant sparklers and fireworks we should be worried about, it is the very real playing with fire by the politicians.

Are you teaching your students about the Catalonian Referendum? If so, how? Let us know in the comments section below!