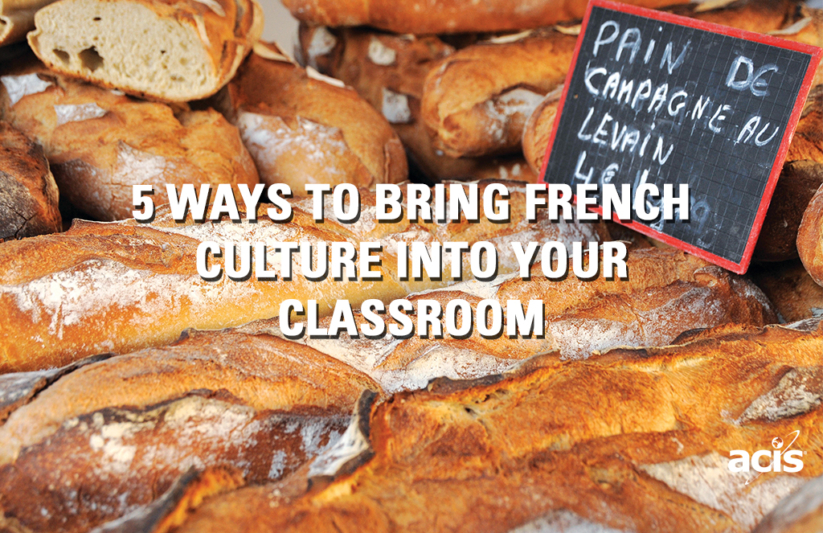 For French teachers, teaching the language is just the beginning. Teaching your students vocabulary and grammar is an essential first step, but then it’s all about the culture that connects to the language.

Helping teachers bring the world into their classroom is our mission at ACIS. Helping educators show their students how big and diverse the world can be is the driving force behind everything we do. We hear from teachers all the time their trips abroad with us allow them to accumulate knowledge, experiences and material objects that they bring back with them into their classrooms. The subject matter they’re teaching transforms from an idea of a place, person, or thing and into something they’ve touched, tasted and experienced for themselves.

While traveling to France, Belgium or Switzerland is the best way to help your students connect to Francophone culture, there are still many ways to help foster that passion in between trips. Here are 5 Ways to Bring French Culture Into Your Classroom:

The first thing most people think of when it comes to French culture is definitely food. What most people don’t know is that each region of France has its own special tradition and niche when it comes to cuisine. Whether it’s Coquilles Saint-Jacques from Normandy, Piperade from the French Basque Region in the Southwest, Bouillabaisse from the Cote D’Azur or Quiche from Alsace-Lorraine, each region of France has its own culinary identity that goes far beyond cheese, baguettes, and crepes. Exposing your students to any of these regional culinary traditions is a fantastic entry point into the unique and distinct culture of each region.

The French film industry has produced some of the world’s most influential films with genres unto themselves such as new wave and film noir. France is the third biggest film market in the world both in terms of tickets sold and revenue. It’s also the biggest producer of films in Europe. France is one of the only markets in the world where American films don’t make up the majority of revenue gained largely due to the strength of the French film industry and the consumption of French films in France. Paris also has the highest density of movie theaters per capita of any city in the world. For a list of student-appropriate movies check out our list of 25 French Movies Appropriate for Students.

French society has been at the apex of advanced Western society from the Renaissance through the Enlightenment right up until present day making contributions in fine art, classical music, theater, and literature all along the way. Whether it’s composers such as Claude Debussy, Georges Bizet or Maurice Ravel, painters like Claude Monet, Edgar Degas, Pierre-Auguste Renoir, Paul Cezanne, or Henri Matisse, philosophers and thinkers such as Rene Descartes, Voltaire, or Jean-Paul Sartre, or playwrights like Moliere or Balzac, there’s a vast and rich history of French cultural icons that can all act as a portal into France’s deep cultural history.

The French Speaking world is full of musical traditions that have produced tons and tons of music over the years. Francophone African nations like Senegal, Mali, Cote D’Ivoire, Cameroon, Morocco, The Democratic Republic of Congo, all have extremely rich and deep musical traditions that all reveal deep insights into each nations’ cultural lineage. France itself has a long and storied musical history whose most famous musical exports include Daft Punk, Serge Gainsbourg, Edith Piaf, Zaz, and David Guetta. While Haiti’s most well-known musical export is Wyclef Jean and The Fugees, Haiti has a long and rich musical history with a variety of musical styles and genres completely unique to Haiti such as Kompa, Zouk, and Rasin. And of course, Quebec has Celine Dion.

5. Explore Francophone Culture Throughout the World

Did you know the most populous French-speaking nation in the world is not France? (It’s the Democratic Republic of the Congo) There are 29 sovereign nations and 11 dependent nations (whose combined populations total over 389 million people) where French is an official language. While France has a rich and diverse culture that one could spend a lifetime exploring, the French-speaking world spans a wide array of countries, cultures, and peoples. Exposing your students to the culture of Haiti, Senegal, Madagascar, Belgium, Switzerland, Luxembourg, Martinique, Saint Martin, or French Polynesia will show your students the language they’re learning has applications to places and cultures all over the world.

How do you introduce your students to French culture? Let us know in the comments below!

One thought on “French Language Resources: 5 Ways to Bring French Culture into Your Classroom”