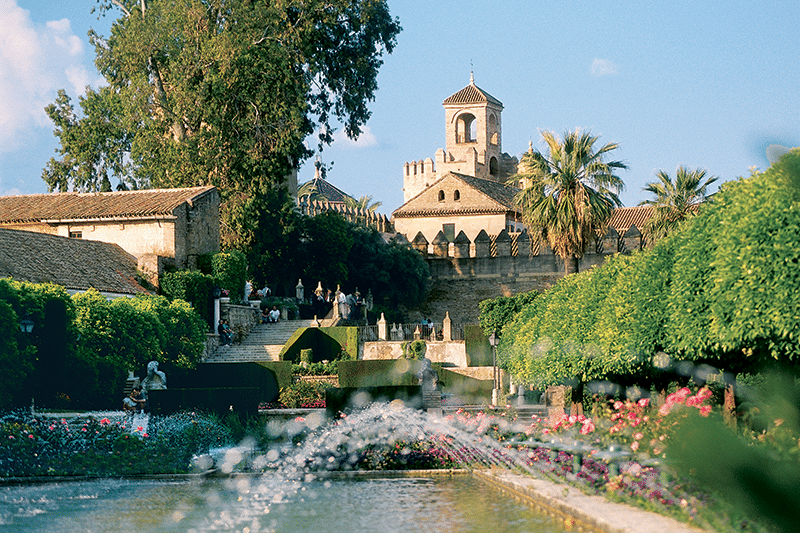 Last night exceptional ACIS Tour Manager, Sonia Beck, kept our ‘5 things I Love about…’ event series rolling with the especially lovable southern Andalucía region of Spain. Sonia warned us that she could wax poetic about 5 things she loves about her favorite tapas restaurant, so it was nearly impossible to cover such a large region, but she somehow managed to do it. And here are her choices.

Sevilla, the capital of Andalucía embodies all of the things that most strangers think of when they think Spain –from blistering summer heat to white-washed buildings to flamenco outfits—it’s a feast for the senses. While there you must be sure to see the cathedral, that dominates the city, the Alcazar, which sits just behind it and the striking Plaza de España. Be sure to also stroll the streets of the barrio Santa Cruz and perhaps grab a souvenir.

Next on the list is Granada. And everyone visiting Granada must visit the Alhambra. There’s a reason it’s one of the most visited sites in Europe. The architecture must be seen to be believed and pictures truly just don’t do it justice. Be sure to visit the cathedral, but also visit the Madrassa, a slightly less visited building near the complex. There is so much to see in Granada, and the best way to do it is on foot. It’s a wonderfully walkable city. Climb up through the Albacín neighborhood to the Mirador San Nicolas, a famed viewing point to see the entire Alhambra complex.

The final city on Sonia’s list is Málaga. Sonia loves it because it is both historic and modern. It is unpretentious and authentic. It is small enough to be able to navigate easily but big enough to have a thriving commercial area, Roman Theatre. Moorish palace Napoleonic fort and incredible marina with pristine beaches within walking distance of the main square. It also has some of the nicest bars and restaurants in Andalucía. While there you must stroll the boardwalk along the beach and visit one of the numerous chiringuitos, beach bars for fresh seafood. The Mercado Atarazanas, the fresh produce market, is also a must, as is the Picasso museum. One hidden gem in the area is the Automobile Museum, truly unique this museum houses an amazing collection of vintage cars and also high fashion and design. Sonia describes it as eclectic, cool and quirky!

Switching gears a bit, the fourth item on Sonia’s list is tapas. Tapas originated Andalucía at some point in the 19th Century. Una tapa is a lid in Spanish. Traditionally as the men sat sipping their early evening sherry, they would cover or ‘tapear’ the sherry glass with a small piece of bread. In turn the bar tenders took to placing an few olives or a salty anchovies on top of the bread, and once this snack was eaten down the thirsty client soon needed another glass of sherry – hey presto! A tradition was born, which has developed into a gastronomic phenomenon in the region. Some of the must-try favorites include, berenjenas al miel (eggplant with honey), espinaca con garbanzos (spinach with chickpeas), solomillo de cerdo al whisky (pork loin in a whisky sauce), Jamon Iberico (cured ham) and salmorejo (a gazpacho style soup, but thicker). All of these are to be washed down with sherry, preferably a crisp hyper-dry Fino or perhaps something sweeter, closer to a desert wine (Pedro Jimenez).

The final item on Sonia’s list is an art form like no other, flamenco. The key elements of flamenco are the guitar, the song, the palmeras (hand clapping) and the dance. At the heart of flamenco’s power is something called duende. Duende derives from the name Duen De Casa – or Lord of the house, and it is the passion and source of inspiration that moves the artists. In Andalucía you may see flamenco at a small fiesta when the spirit moves someone, at a mid-size cabaret-style venue or at a larger performance hall.