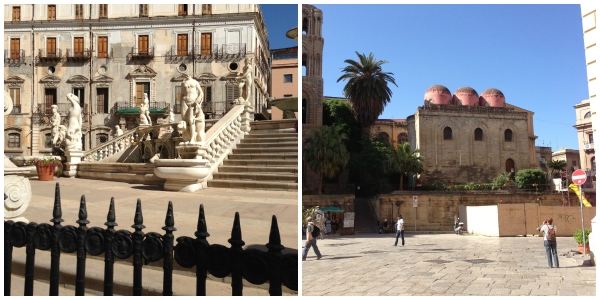 I had been to Sicily some years ago, but it didn’t “wow” me.

We had visited Taormina and then travelled to Siracusa, Piazza Armerina, and Agrigento.  Taormina, I recall, was a stunning and beautiful picturesque village with a Greek temple at the end of a delightful pedestrian shopping street with spectacular views across to the omnipresent Mount Etna.

The rest of the journey was spotty. Spectacular ruins interspersed with badly maintained roads and unspectacular scenery. My Italian friend explained to me very simply that I had missed the essence of Sicily. We travelled together a couple of weeks ago to revisit and rediscover his favorite island.

First stop was Palermo. The approach to the Old Town is through a modern barrage of trendy shops along a wide boulevard. Then the place begins to Baroque-it up. A lot of Baroque in fact. The city started to feel very, very different from any place I have ever visited in Italy before.

There is this grand fusion of history that stretches through the centuries from early Phoenician settlements up to the modern day Baroque. In between the Romans, the Normans, and the Bourbon kings, there is the magnificence of the Moorish period. It reminds me of Andalusia and then of Morocco with the Baroque elegance of Italy. The Royal Palace is a classic example of this mix of styles stretching from the 5th century B.C. all the way to the 17th century. There is a church dedicated to St. Peter; decorated by Islamic artists with a Phoenician foundation. It is as life should be.

There are markets everywhere alongside tiny lanes which zigzag through this ancient maze of a town. I love the markets and there are plenty of them. They sell anything from fish, including swordfish beaks, to bottarga, the tiny blocks of dried tuna eggs that they sell to grate onto pasta, to sarde (big sardines) that are also used in pasta, along with every fruit and vegetable imaginable. Oh and it seems that there were a lot of pigs’ heads just to keep the vegetarians on their toes.

Sicily is the land of the cherry tomato and the sundried tomato paste. Plenty of tomatoes and plenty of sun here. There is olive oil—the good kind—which Sicilians use exclusively to cook with. There are cheeses such as the famous Sicilian cheese, ricotta, along with cannolis. Not to mention the abundance of artwork, tacky T-shirts, and the usual plastic kitsch that makes up any “fine” market day forage.

Sicily is literally the engine room of food for most of Italy. Palermo, through its markets, is where you find it. There is so much to do and see in Palermo that it becomes slightly overwhelming. The Moorish influences that reminded me of Andalusia pop up in the most unexpected places. The centuries are layered like a sensuous dessert. It seems that everyone has passed through this island and in Palermo this creates an extraordinarily unique feel.

It is a late-night city; noisy and fun. It is a seaside town with the most beautiful, clean beaches and clear water you could ever ask to find. All of this within 15 minutes of the center. The food is pasta, fish, ricotta, and ice cream, and the olive oil is not bad either.

This is not Tuscany, this is raw and in your face. It blew me away.

The Road to Ragusa

After a quick morning visit to the rather spooky catacombs, we began our journey around the island. Incidentally, as a side note, if you do not have the stomach for seeing lots and lots of dead bodies fully clothed hanging decoratively around the walls (and I mean lots!) dating from as late as the 19th century, then you should not head into the Palermo catacombs. But if you fancy it, it can be quite an experience as it’s also one of those places that you just simply never forget. A quick stop at the best pastry place in Palermo and then off on the road we went.

Getting out of Palermo can be difficult. The traffic is intense, the rules are chaotic (none), and the roadway is in desperate need of money (it disappeared!). But such is life in Sicily.  What is striking once you leave the city and head inland is how incredibly green the countryside becomes.

Our first destination today was to visit the amphitheater and temple in Segesta. It is without equal and because it was outside of the earthquake zone, it remained pretty much as it was built some 2,500 years ago. 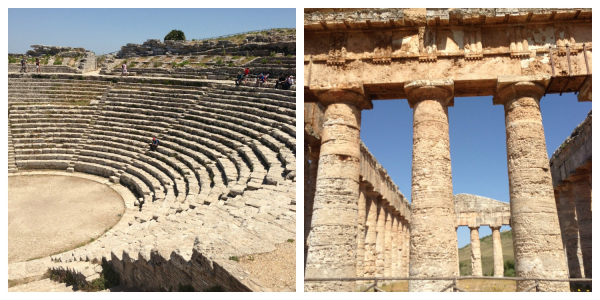 We continued on past the beautiful seaside resort of San Vito Lo Capo where some of the most stunning beaches are. We passed Erice and Traponi on Sicily’s far West coast down towards our destination of Mozia.

Fields of vineyards and orange groves are everywhere. This is the area known for marsala wine and the principle producer of oranges for all of Italy. En route, we also passed groves of almond trees and pistachio trees. It is so rich in viable vegetation that you can only imagine what the invaders from the northern countries thought when they first discovered the island.  One thing is for sure, they didn’t leave and who could blame them?!

After a late afternoon arrival in Mozia, we took a boat out to the ancient island of San Pantaleo. The island was bought by a wealthy English chap named Joseph Whitaker who made his fortune in the marsala wine trade, but spent his life collecting and excavating this island.  In so doing, he discovered one of the most important Phoenician settlements in the Mediterranean. Established in the 8thcentury B.C, it is also the best preserved Phoenician site in the world. The boat ride out to the island passes endless salt flats and windmills that are dotted all over which functioned to grind the salt into powder. The salt is stored under terracotta tiles which create mini mountains around the flats. It is a beautiful site and an unusual landscape.

The day is losing us and we head down through Marsala with sadly no time to stop. Finally we reach the outskirts of Agrigento and there on the hill sit three beautiful Greek temples amidst a modern barrage of ugly architecture. How could such a magnificent place be so polluted and engulfed by this landscape? The old town of Agrigento, barely visible and desperately in need of exposure, is the only respite apart from the temples. The Greek temples are not as impressive as Segesta but stand out amidst a background of dreadful buildings and pollution.  We keep moving on and eventually head inland as darkness falls into a delightful town called Ragusa.

In Part II of my Sicily recap, I venture to the flower festival in Noto (which also happens to have the best gelato in all of Italy) and survive a windy trek up Mount Etna for an experience of a lifetime.

“In 1978, Peter Jones founded ACIS with a few colleagues, who all believed that travel changes lives. Knowing the important difference between a trip that’s mediocre and one that’s extraordinary, he built ACIS from a deep belief and understanding that ACIS group leaders and participants deserve the best—from itinerary development to hotels to perhaps most importantly, the people hired to guide teachers and students throughout the journey.”
historyItalySicilytravel stories