I feel like I have spent an awful lot of time around the Vatican recently.

There was Easter and there was the beatification two weeks after when half of the world came down to witness the first time in the history of man that four Popes would be in the square at the same time — two of whom would be canonized. It was a remarkable day with the city full of pilgrims from all over the world. And then there is the papal audience, held every Wednesday, but specifically the Wednesday after Easter when I had arranged to meet with my Italian friend and Monsignor Pablo Colino who is the musical director for the Vatican.

We grabbed a cab to the back of the Vatican where there is a discrete entrance, went through a security check, and then headed across the Vatican courtyard to be met by the Monsignor. Here we were in the quietness of Vatican City undisturbed by tourists and in the shadow of the great dome of Michelangelo. Two guards protect a small entrance in this square and above the entrance is where the Pope has a modest apartment. He elected not to take the more opulent papal apartment and instead chose his relatively humble quarters to live in.

We then had this moment.

A tiny covered golf cart was parked, waiting, and the Monsignor indicated that the Pope would be down very shortly. As we continued across the courtyard, sure enough, we looked back and there he was. The two exchanged a wave and we carried on about our day. In the meantime, the Pope scooted off to join the millions who had gathered in the front of the piazza for his papal audience. This Pope commands extraordinary numbers — so much so that all of the audiences have been switched to the main piazza in order to accommodate the vast crowds. 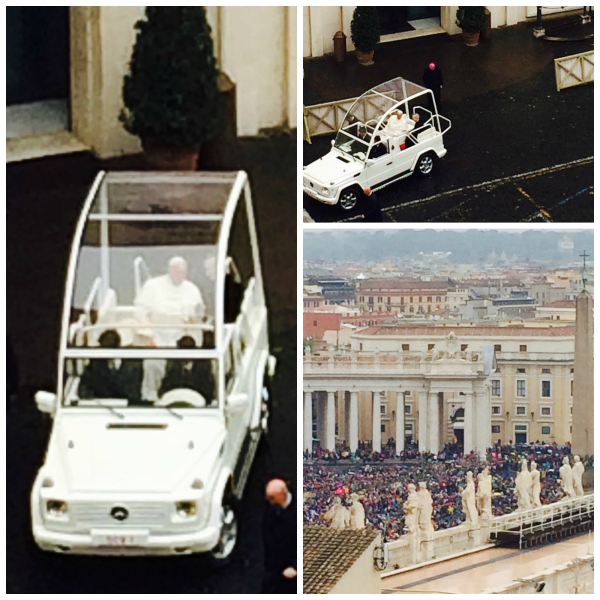 We walked along beautiful corridors adorned with statues and art and eventually arrived at the Monsignor’s apartment.

We had our own “audience” with the Monsignor who is a delightful character. We posed for pictures on the balcony outside and looked down to the square to see the crowds who had gathered waiting for the Pope to arrive. We revisited some of our groups who would be performing at St. Peter’s and then strolled down and through a passageway into the main basilica. I have been to the basilica many times, but never have I walked into it when it is completely empty.

Today, on this morning, it was shut off because of the papal audience. There we were, inside the great basilica of St. Peter’s with its magnificent altar and art from every age in every corner of this — the largest interior space of any cathedral in the world. It simply was a stunning moment and a moment to reflect on the wonder of travel. 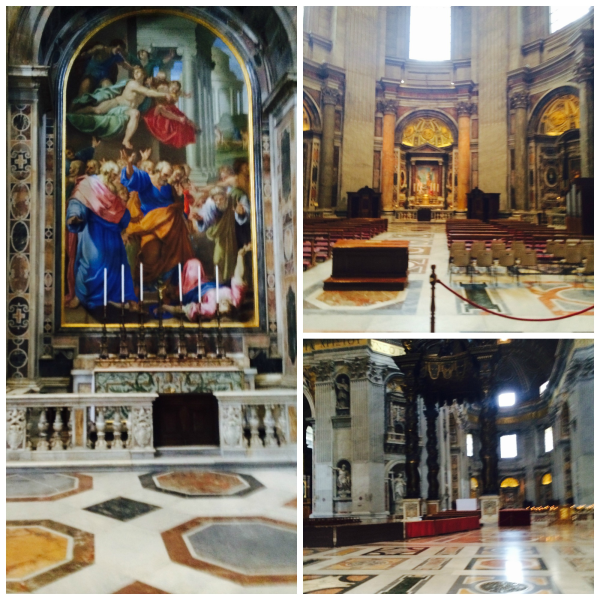 We left Monsignor Pablo and walked to the exit gate that was protected by the Swiss guards.

Here we were, inside looking out at the crowds who were looking in. We drifted into the street, walked around to the main piazza which was teeming with people, saw the Pope from a distance, smiled at each other, and walked away with our secret intact.

“In 1978, Peter Jones founded ACIS with a few colleagues, who all believed that travel changes lives. Knowing the important difference between a trip that’s mediocre and one that’s extraordinary, he built ACIS from a deep belief and understanding that ACIS group leaders and participants deserve the best—from itinerary development to hotels to perhaps most importantly, the people hired to guide teachers and students throughout the journey.”
ItalyRomeSt. Peter's Basilicatravel storiesVatican City