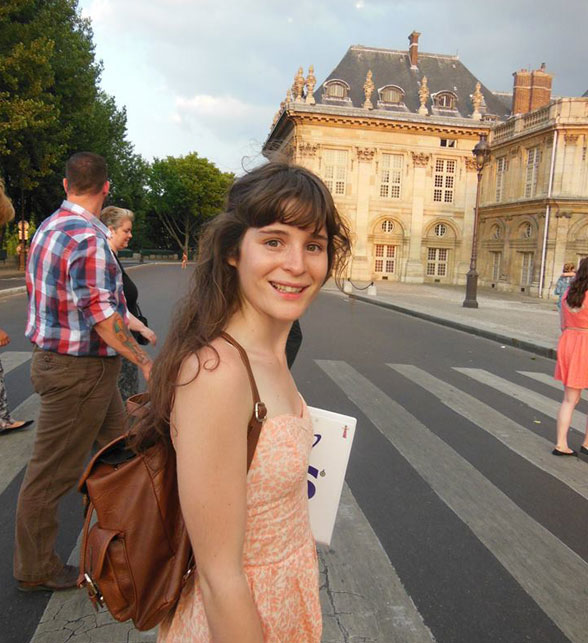 Get to know our tour managers, well-traveled and fascinating individuals who make your ACIS educational tour truly unique and unforgettable. Today we’re happy to introduce you to Lou Salaun.

Tell us about yourself. Where did you grow up?

I am from a small village in South of France, well actually my family house wasn’t even in the village, it was in between two villages. I had no neighbors, surrounded by only vineyards and olive trees.

I passed most of my time racing with my dog, “Sambucus” named after a medicine against sore throats, in my garden. However beautiful my garden was, it couldn’t hold me down and so, aged 12, I decided that I would study in a big city somewhere that had nothing to do with the south. Different food, people and fashion, something new, I wanted discover and explore like the child I was, albeit in a much bigger garden!

Going to London on my own at 18 was indeed an adventure. During the four years I spent there I learned so much about myself and what I wanted out of life, I learned a new language and with it, a new way of communicating, I made friends from all over the world and ate for the first time; sushi and Indian food. I fell in love with England and almost forgot how to speak French.

In those fours years I also went to Scotland (where the sweetest people live) travelled to Thailand and Morocco. When I’d finally return home to the south, sometimes not for months on end, I’d have dozens of amazing stories to tell. Actually I enjoyed telling stories so much that I decided to become an actress! Now I live in Paris and I continue to collect stories about the people I meet, the places I go and the food I eat, it’s one of the true pleasures I’ve found in life.

What’s one thing you wish every young adult/student could experience while traveling?

The best feeling to experience while traveling is the surprise effect. When something happens to you that you could have never imagined. Because it’s so exotic, so foreign, so different from what you usually know that your mind suddenly opens to a whole new level. Once that ‘window’ opens in your mind it stays like that for all your life. That’s a great feeling.

When I was nineteen, I went to Thailand with my parents, one afternoon I was canoeing with my dad and after a while we saw a group of people swimming in the same direction. My dad is very curious so he ‘parked’ the canoe and we followed the group of people without knowing where we were going.

We caught up with the group as they were swimming under a cliff, it got darker and darker and without realizing it we were in pitch black. It was impossible to turn back without getting hurt so we continued following only the voice of a stranger who seemed to know what he was doing. We thought we were going to enter a cave and get lost but after a few minutes, we started to see light again. It was not an underground cave but a really small beach in between two cliffs which used to be a hideout for pirates. Some people even say that the pirates would bury their treasures there because it was so difficult to access. That is something that would have never happened to me in France. (We don’t have pirates.)

What is your favorite thing about being a tour manager?

My favorite thing about being a tour manager is being the person who is there for the first time. The first time someone on my tour sees Versailles or the Eiffel Tower. I get to be there and see their face.

Try everything, especially if you would never do it at home. Try the food, try to speak, try all the things that a foreign country has to offer to you—macarons in Paris or grilled crickets in Thailand. Be yourself, but be even more curious than you are usually.