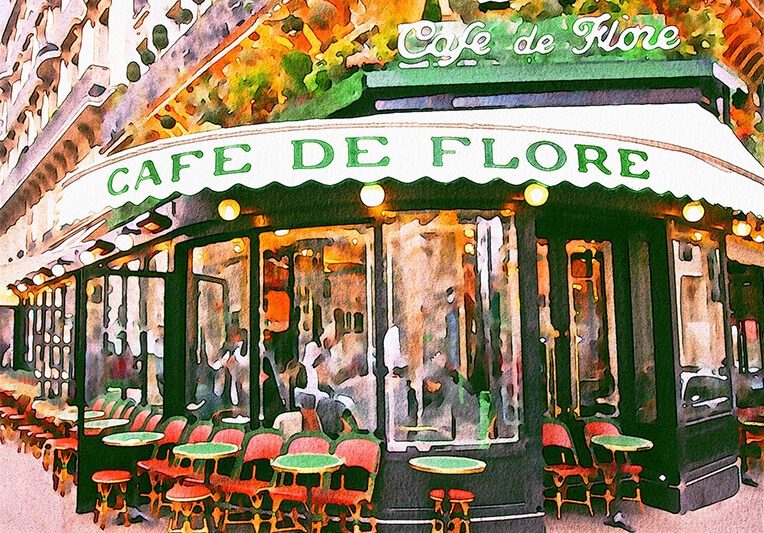 A city that seems picturesque at every turn, nearly all of the City of Lights is instagrammable. On your next school trip to France, Paris is one of the key highlights for student groups. However, if you’re hoping to snap a photo while you’re sipping on a café au lait and munching on a pastry, here are the top instagram worthy cafes in Paris.

Known for its standout pink façade, La Maison Rose is nestled on a cobblestone street in Montmartre. It was often frequented by artists in the early 20th century.

Angelina is a Parisian institution. Founded in 1903, its glitzy interior has attracted a glamorous crowd for over 100 years. Its specialty pastry is the Mont Blanc, a meringue topped with whipped cream and chestnut cream vermicelli.

Café de Flore is one of the oldest cafes in Paris. In the 20th century, it was frequented by high-profile artists and writers, many of whom wrote some of their greatest works while sitting in the café! Its quintessential Parisian-ness has earned Café de Flore to be the setting of many fashion shows and famous photographs.

Picturesque Au Vieux Paris d’Arcole is just around the corner from Notre Dame. Constructed in 1512, the building was originally home to the Canon of a local cathedral. However, in 1723 it was transformed into a wine bar and has served delicious food and drink ever since.

While Odette opened its doors in 2013, its interior provides an Art Deco-inspired view of 1920s Paris. With its classic façade and colorful cream puffs, Odette is ideal to snap a perfect Instagram.

One thought on “Top Instagram Worthy Cafes in Paris”