See our travel policies in relation to COVID-19
Click Here
After the winter months of hibernation, this week marks the annual re-opening of the Fondation Claude Monet – the once home and garden of the famous Impressionist artist. Situated in the town of Giverny, an hour north of Paris on the banks of the Seine, today, this charming small town is known around the world and has become somewhat synonymous with the Impressionist movement.

The worldwide fame of this small French town all began in the late 19th century when Monet and his partner Alice, travelled by train from the bustling city of Paris into the tranquil Normandy countryside. From the train window they spotted, and were immediately charmed by the sight of this delightful town, so much so that they came to live here, in Giverny. For the next 43 years until his death, it was here that Monet lovingly created the beautiful gardens that would inspire his most well-known and loved series of paintings, the Water Lilies. 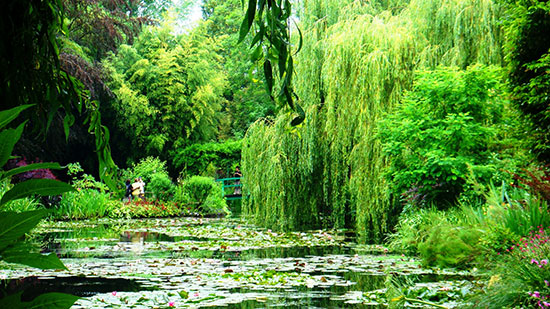 You may never have heard of Giverny or the beautiful garden there, but I’m certain you will have seen it. The Water Lillies series must be one of the most visually recognisable works of art around. The beautiful hazy blue, purple and green colours of Monet’s lily pond appear on all manner of merchandise from key chains to T-shirts to mugs not to mention reproduction prints being a favourite on the walls of homes, hotels and even dentists’ surgeries.

Beautiful as they may be, the reproductions just don’t do justice to the awesome beauty of the originals. The series is found at the Musée de l’Organgerie in Paris and on your next trip to the French capital, I urge you to take the time to see them for yourselves. Monet’s mastery is truly at work here and he manages to transmit the great beauty and serenity of his garden in Giverny through these immense canvases. Better yet, if you truly want to make pilgrimage to the great Impressionist master, head to Giverny itself and gaze at Monet’s Japanese bridge, his lily filled pond and the draping weeping willow tree that perfectly frames the shot.

At the end of the 19th century, Monet wasn’t alone in leaving his Parisian studio for the great outdoors. The Impressionist movement came about as a reaction against the conservative taste and realism of French classical art. From the early 19th century, photography had been developing and to this group of freethinking painters, there seemed little reason to reproduce reality on canvas. Instead, they sought something that photography could not yet transmit – the mood and atmosphere of a place created by the ever-changing light.

With a good rail connection and its proximity to Paris, the beautiful rural countryside of Normandy, the region in the northwest of France, was the popular destination and subject for these artists. Whenever possible, they would set up their easels in the open air and recreate the ever-changing light and landscape by using small, thin and visible brush strokes on canvas.

They became fascinated, almost obsessed by how different a scene would look at different times of the year and different times of the day due to the change of light. A perfect example is Monet’s series of Rouen cathedral – he painted the same façade of this majestic gothic cathedral over thirty times on different days and times between 1892 and 1893. Each painting is very different in colour, character and mood, as Monet would have explained, because he was ‘painting the light.’ If you travel to Rouen this summer, there will be after dark light projections of Monet’s paintings onto the cathedral. 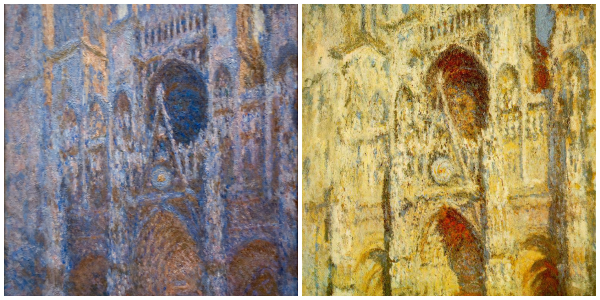 Of course, for any artist fascinated by light, water is an irresistible theme and the banks of the Seine and the north of Frances’ rugged coast were popular subjects for Monet and his friends. Eugène Boudin, Monet’s greatest artistic influence, was a native of the picturesque fishing port of Honfleur on the Seine Estuary. It was here that Monet first met his friend and here that he would later return with the whole band of renegade artists – Courbet, Corot, Sisley, Pissarro and Renoir – to endlessly paint the colours of the Seine bay and surrounding area. If you take a trip to the north of France, make sure you visit this charming town – and pop into the Musée Eugène Boudin which has many works dedicated to Boudin and his visiting artist friends. 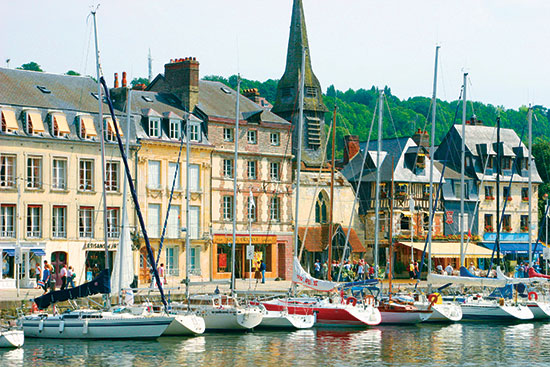 For all lovers of art, making pilgrimage to the landscape that once inspired an artist to create such enduring masterpieces is a real dream – travelling around France you will come across many such landmarks  – Van Gogh’s café terrace in Arles, Manet’s many portrayals of the Seine valley and Cezanne in Provence. Before you hit the road, I’d recommend starting with a trip to the Musée d’Orsay in Paris. With the largest collection of Impressionist works in the world, this truly is a temple to the artistic movement, which shook Paris’ art scene in the 19th century, and forever changed the future of painting.