Looking for discounts, World Traveler Rewards, and more?
Travel Deals
I paid a visit to Rick and Nancy’s farm, Bear Meadow Apiary, in Ashfield, MA the other day.  They keep chickens, grow vegetables, and also have a bunch of bee hives.  Rick spends most Saturdays educating me about bees at the farmers market, pointing out the difference between bumblebees and honeybees, and explaining his current housing arrangement for the bees.  On a weekly basis, he gives me updates on what is going on in the hives.

On this day in particular, I was specifically heading there to get a look inside the kingdom of the honeybees.

As it turns out, each of Rick’s hives have between 30,000 and 50,000 bees living inside.  The bees in the hive are devoted entirely to providing for the queen whose job it is to keep producing bees and sustain a stable population.

The players inside of the hive all have a role.

Firstly, meet the drones—the male bees.  These guys do nothing at all except impregnate the queen bee.  There are about 200 of these guys hanging around.  Once their queen bee is impregnated, the rest of them sit around the hive relaxing and watching TV.  Once a day, they go to “a drone congregation center” (I am not kidding) looking for suitable brides to mate with.  If they happen to find a mate, they do not come back but if not then they return to the hive to eat more potato chips and just hangout.

Meanwhile, there are sentries on duty to stop intruders from other hives from stealing their honey.  This stuff does actually happen.  The conversation goes something like, “Halt! Who goes there and who is your queen?”  The wrong answer means you cannot come into the hive.

Then there are the bee-bread makers who make a bread-like substance from the pollen and the nectar which will serve to sustain the entire population of the hive.  In addition, there are a large amount of worker bees who create the honeycombs.

Only a super elite core of bees are allowed to fly everyday across the countryside while caressing the flowers, scraping the pollen, smelling the roses (as it were), gliding through lavender fields, and making our flowers more beautiful and faster-growing.

The queen has a lifespan of over three years while the other guys in the hive only get to see around three months of life.  Rick had actually brought in some Russian queens, which cost him a sizable chunk, because of a disease infiltration with his home bred queens.

Today, I climbed into a bee suit and walked into this holy empire to visit each hive while looking for the queen.  In addition, Rick was trying to make a new queen from some of his good bees.  Would I be able to see a new queen?  Would I survive my first incursion into the Red Zone? 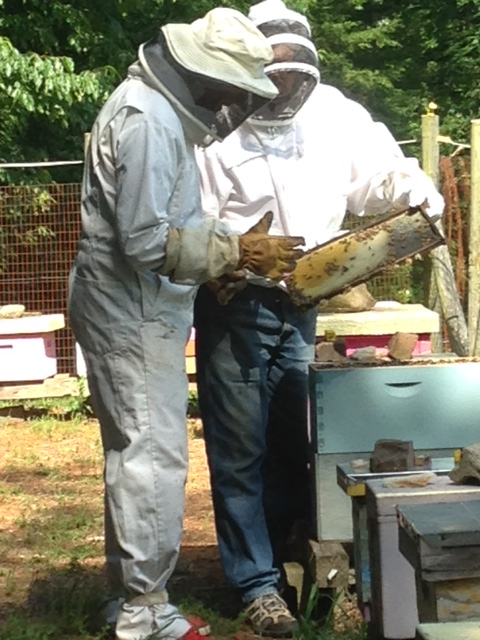 Although slightly concerned that a bee would penetrate my outer layer, I was reassured that it would not happen.  Rick told me that bees essentially do not sting.  They give you warning signals.

They first turn on their buzz and start buzzing around you if they do not want you to be near.  If that does not work then they start hitting you by flying straight into you as a second warning.  If that does not work, then frankly it is a lose-lose situation because they now have to assume that you did not get the message and they are going to have to sting you.  That means that they die and you have to seek medical attention.  Chances are that that will not happen but…better to not take chances.

Anyhow, today I got to see a queen bee made.  The deal was he had six female bees he was trying to make a queen from.  The first one out of the pod would kill the others because there can only be one queen.   It was an incredible moment inside of the bee hive when the queen bee came out from her overly-large pod.  It is a tough world in the hive and it’s not easy unless you happen to be one of the short-lived males. 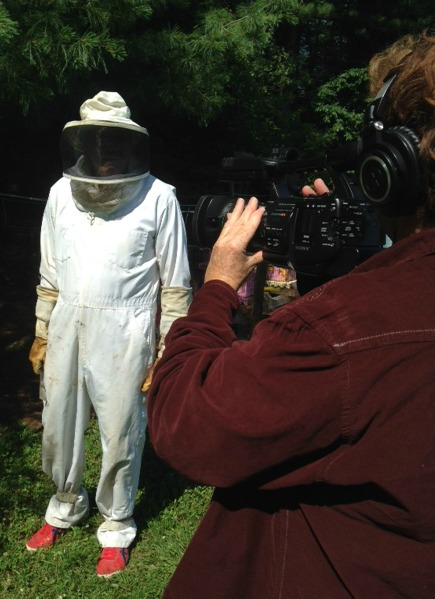 Beehives are filled with life.  There is a police force, there are workers, there are artists, and there is a boss.  If everyone plays by the rules, there is lots of honey for everyone, our flowers get pollinated, our gardens look beautiful, and all is well (i.e. like a Bull Market). However, as in life, every now and again someone will screw it up.  Bears like honey too (i.e. like a Bear Market)! Such is life.

“In 1978, Peter Jones founded ACIS with a few colleagues, who all believed that travel changes lives. Knowing the important difference between a trip that’s mediocre and one that’s extraordinary, he built ACIS from a deep belief and understanding that ACIS group leaders and participants deserve the best—from itinerary development to hotels to perhaps most importantly, the people hired to guide teachers and students throughout the journey.”
educationstaff travelUnited States