My name is Adam, and I teach English in Monroe, Louisiana. I’m a first time ACIS Group Leader, and as such, I was invited to participate in their annual Barcelona Training Weekend over the MLK holiday.

These global conferences, whether abroad or in the US, are all about ACIS wanting to thank teachers face-to-face for their hard work and putting faces to names. However, I came to realize that beyond being a wonderful travel experience, there are two other practical reasons for attending – getting to know other teachers like myself (excited about changing students’ lives through travel) and going through the process of traveling overseas. Going through the same process our kids will experience – from calling the bank and phone company prior to departure, to going through customs and jet lag – has been an invaluable stage in my pre-departure planning. The experience connected me with some awesome educators, and it gave me loads of information to share with my students. Plus, as lagniappe, it gave me a ton of unforgettable personal experiences.

Twenty-five years ago, I was lucky enough to couch-surf around Europe for three months. I had friends living in Le Mans and London, and I traveled everywhere a Eurail pass could take me. Barcelona was one of the highlights of that trip, especially the architecture of Gaudi, so when I heard that I would be attending a conference in that beautiful city, I was thrilled. I was not prepared, however, for how much more enriching my return experience would turn out to be.

Why ACIS? Let our teachers tell you

The ACIS team met our 10:30 group at the airport, and after checking in and boarding our bus, we were treated to an orientation by lovely Basque-native “Oi, Anna!” She got us excited about her city and its unique culture and free spirit (as exemplified by the many Estelades, flags supporting Catalan independence). The ride to the hotel confirmed one of the reasons I chose ACIS in the first place – excellent, charismatic, well-informed guides. We arrived at the hotel and checked in with the ACIS staff, where I got to meet Jill and Tricia (my allies in Boston!) and signed up for the bike tour that afternoon.

Our hotel was well-situated, in between the gothic district and El Born, with two metro stops a block away. Heeding the warnings of our hosts, I staved off the nap with a cafe con leche and a croissant from the cafe next door, which I enjoyed as I made my way through the Gothic Quarter to Las Ramblas. Being from Louisiana, I was reminded immediately of the architecture and the overall street vibe of New Orleans – the sounds of shopkeepers sweeping stoops on cobblestone, the smell of baked bread from that morning and beer from the night before. As the side street opened onto the famous promenade, I followed my ears to a group of street performers, Los Boozan Dukes, playing what they described as “creole stomp,” making me feel right at home. 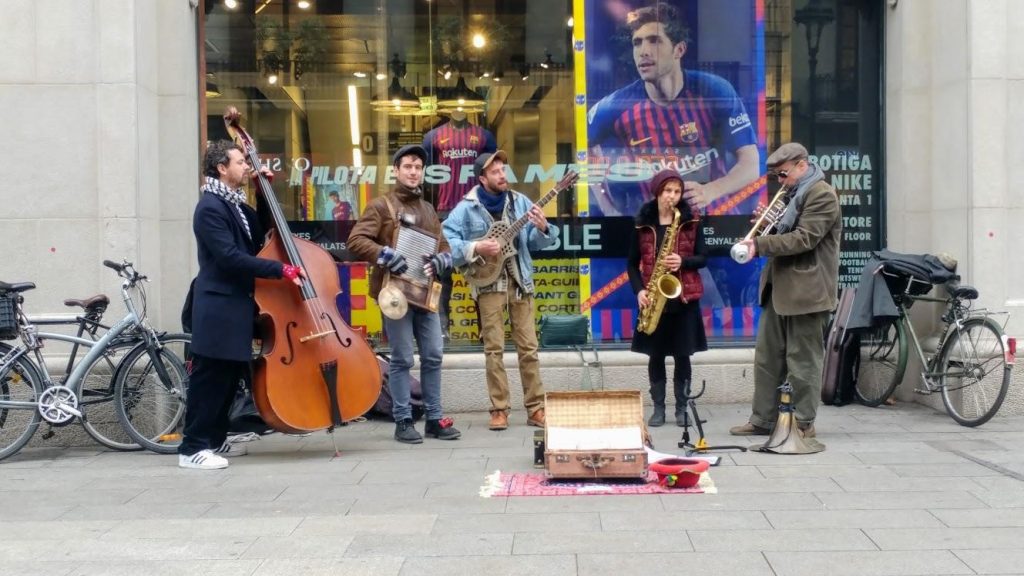 My next stop was the magnificent Barcelona Cathedral, flanked by the Gaudi Museum (unfortunately closed) and remains of the Roman wall, with “Barcino” spelled out in front, to the right. The cathedral is dedicated to the memory of the young martyr St. Eulalia, and its crypt holds her remains. 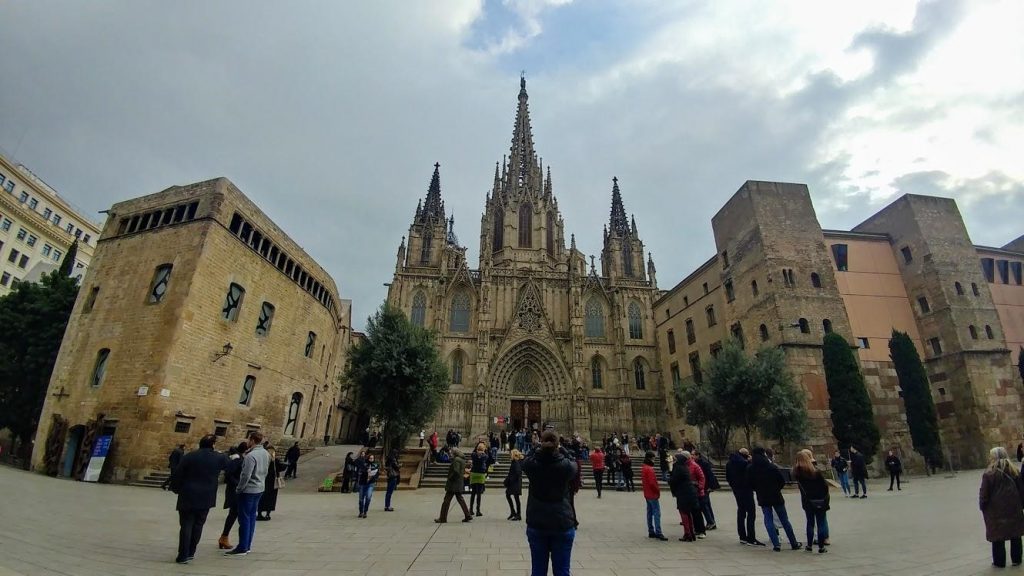 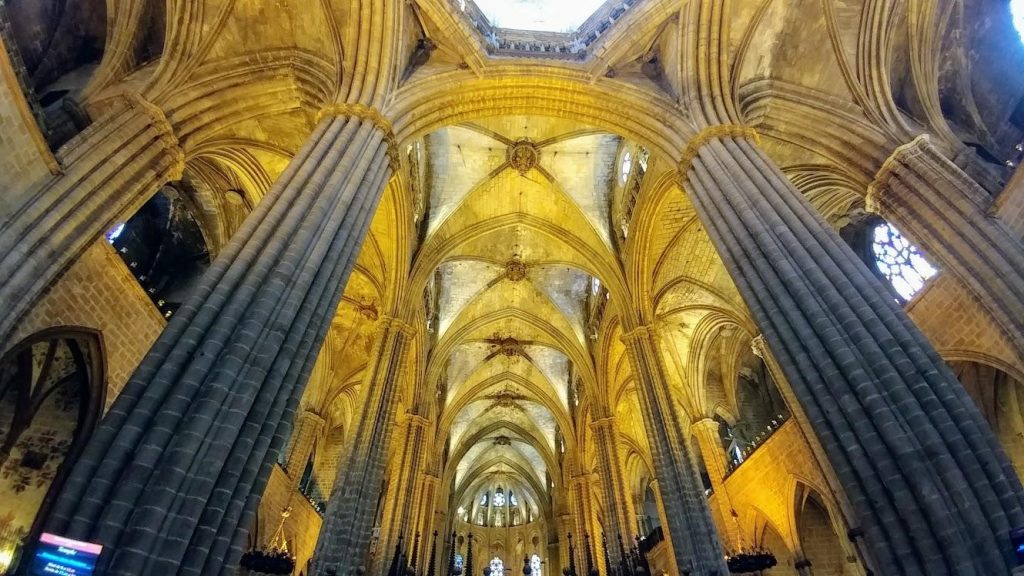 After walking the perimeter, I took the small green elevator to the rooftop and breathed in the magnificent view. From the shadow of the crossing tower with its intricate carvings, my panoramic view included the majestic Montjuic, the rooftops of the Gothic Quarter, and the wide expanse of the Mediterranean. As someone’s abuela watered her plants on a nearby roof, and men in blue uniforms work on the tiles of another, school children played soccer in a rooftop schoolyard. 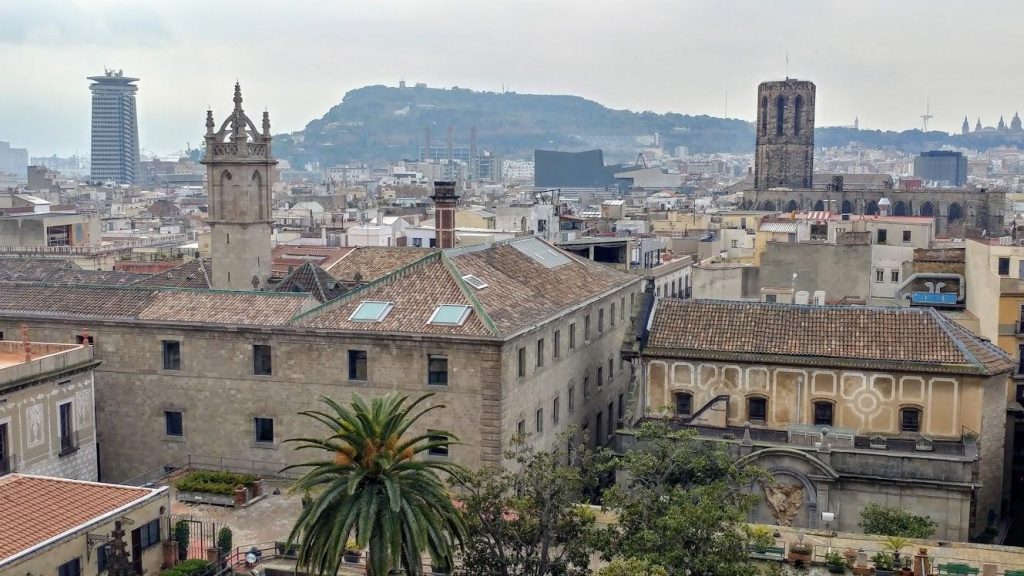 I headed back to the hotel via the narrow street beside the cathedral and found myself near the courtyard entrance. Inside, the quiet serenity was punctuated by the occasional honk of one of thirteen geese there (representing St. Eulalia’s age at her martyrdom). Opposite the entrance, a supporter of Catalan independence sang songs of freedom, his guitar case open for tips.

At 2:30, I met my group (Churros!) for the bike tour. The tour started in the trendy area known as El Born. Walking there from the hotel took about ten minutes, and the stroll took us through the funky neighborhood known for its tapas bars and bohemian boutiques.

We boarded our red bikes (http://biketoursbarcelona.com/) and headed out in two or three loose groups, moving from park to park, eventually making our way to the waterfront. On the way, we saw Ciutadella Park, with its dragon-ringed fountain, and the grand Arch of Triumph. Our guide led us back from the Olympic Port via La Barceloneta, “little Barcelona,” a warren of narrow streets with fresh laundry hanging from balconies overhead. 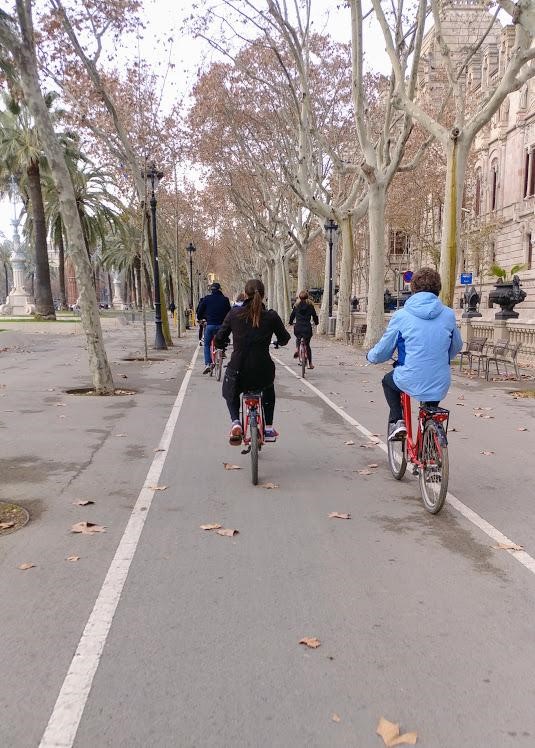 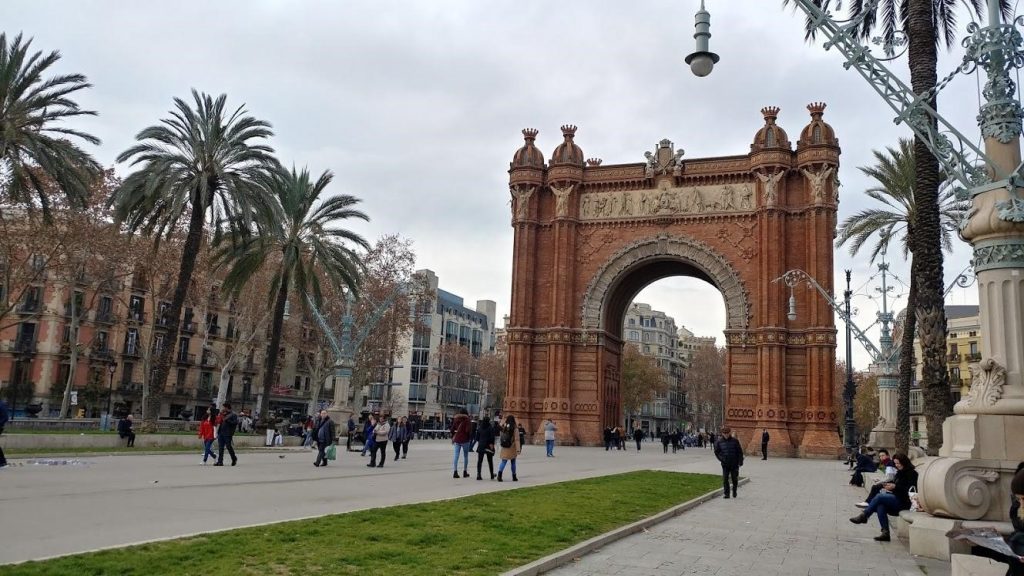 Before going back to the hotel, I decided to check out the Santa Caterina Market, with its colorful wavy roof  and equally vibrant vegetables and delicious pintxos. The cones of smoked and dried jamon and fuet cost only a euro. 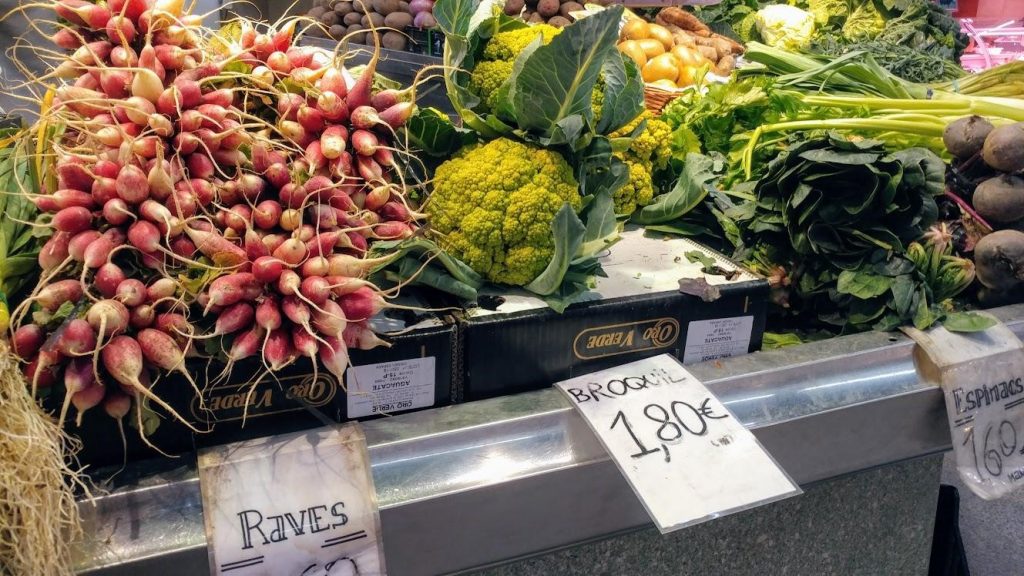 At the welcome dinner that evening, we celebrated our safe arrival and amazing luck with more great teachers and ACIS staff, and we were treated to tapas, wine, and an impromptu speech by Peter Jones. Afterwards, my new friends (who share the same birthday) and I wandered the streets and found ourselves in Els Quatre Gatos (4Cats) the famous gothic quarter haunt of Pablo Picasso.

The next morning came early, but after a quick breakfast and plenty of coffee, the ACIS staff gave us lots of useful information to help us lead our various groups.

Our bubbly afternoon activity involved taking a tour of Cavas Freixenet, in nearby Sant Sadurní d’Anoia. After the to 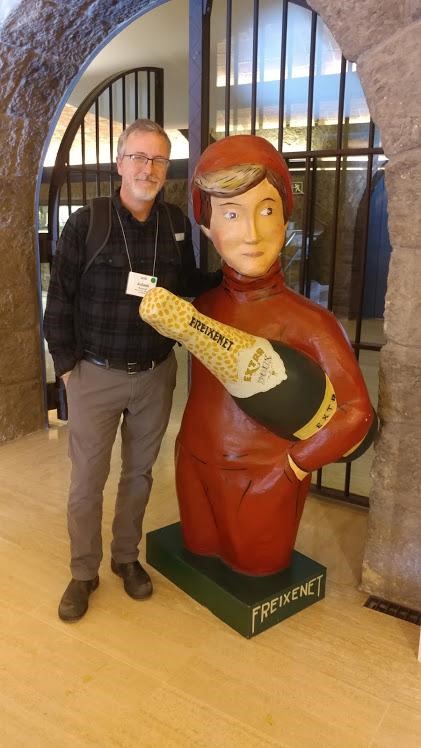 ur of the factory (which involved a lesson in the making of cava and an underground tram ride!), we dined on a three-course menu of cava-infused delicacies.

Saturday night was free on the schedule. Before I left home, at the urging of my wife, I had signed up for a tapas tour of the San Antoni neighborhood – described by our guide as the “Brooklyn of Barcelona.” Although I felt every bit the tourist, it turned out to be some of the best food of the trip.

Because the taxis were on strike (protesting the presence of Uber), another teacher and I elected to try out the metro instead of walking. After going down stairs at Placa de Catalunya to the car park(!) and asking a nice young couple (with lots of smiles and pointing), we found the entrance, bought a ticket, and got on board headed the right direction. We ran to the meeting spot comically late and out of breath, but we made it! The rest of the evening was relaxing, delicious, and surprisingly varied, with a visit to four different neighborhood bars.

Our night included sampling white table wine and vermouth at a bodega and drinking microbrew at a hipster draft house, and the tour ended with Bar Ramon and a tableful of amazing food: Catalan botifarra sausage with foie, Garlic and chilli prawns (gambas al ajillo), Padron Peppers, and chilli Patatas Bravas.

I stayed up late again that night, chatting with other teachers in the lobby, sharing stories of our trip so far, of our travels to other places, of the trips we plan to take. 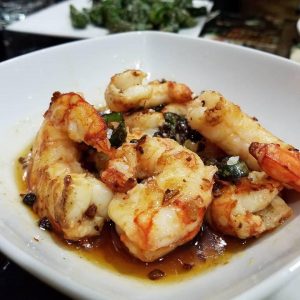 I awoke Sunday to rain, sad that it was my last day but missing home. My kids asked if I was going to church that day, and I replied that yes, I was going to one of the most magnificent churches ever built. After the scheduled bus tour, which included the climb up Montjuic and a visit to the whimsically organic Parc Guell, we arrived at Gaudi’s masterpiece.

When I saw La Sagrada Familia twenty-five years ago, I remember the towers rising above an unfinished nave. The nativity and passion facades were there, as well as the crypt, of course, but the bulk of the interior was incomplete. I was wholly unprepared for what I experienced when I finally entered the building.

Removing my wet hood, and turning my eyes to heaven, I tried in vain to take it all in. I’m sure that lack of sleep, exhaustion, and elation had taken their toll, but I became overwhelmed. And I wept. I know how it might sound, but words fail me. There are some places that have to be seen and felt. La Sagrada Familia is one of those places. The Romantics talk of the sublime – that ineffable aspect of God that inspires awe, overwhelms, amazes, terrifies and excites. Gaudi in his vision, and the numerous architects and artisans that have sought to realize his dream, have come as close as I’ve experienced to duplicating the experience of visiting one of my own country’s natural wonders – the Grand Canyon, El Capitan, the Painted Desert. It’s a humbling experience, even surrounded by the swirling humanity of visitors to Barcelona’s most famous attraction. 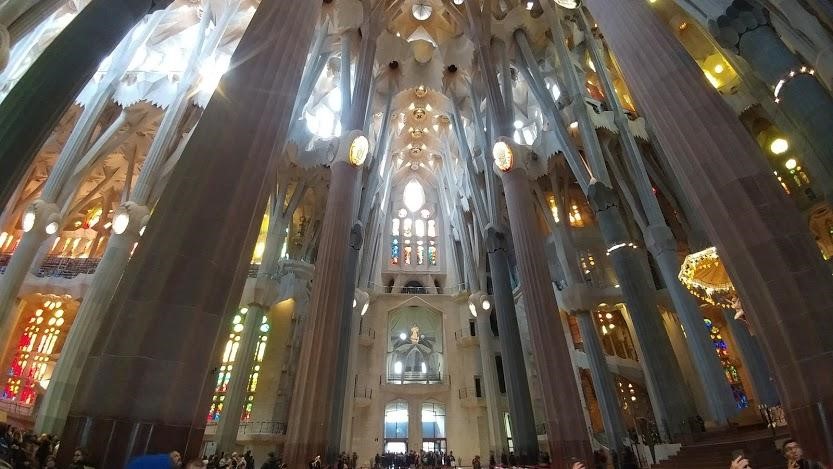 In the gift shop, I bought my wife a book about the influence of Nature on Gaudi’s masterpiece. I heard more than once on this trip about Gaudi’s three main influences: his faith, his love of nature, and his love of Catalunya. I learned that his church’s central tower, the Jesus tower, will be one half meter shorter than Montjuic “because man’s creation should never outshine God’s.” Plans are to complete the century-long project by the 100th anniversary of his death, 2026. I plan to revisit, this time with my wife.

As if I hadn’t seen and experienced enough, my new friends and I purchased tickets to see one of the best soccer teams in world play in one of the most famous stadiums. And, with the blessing of fútbol fan Peter Jones, we hoped to see one of sport’s best score a goal. Using my newfound metro skills (and leftover tickets), we followed the throngs of people to Camp Nou, and our upgraded tickets granted us VIP treatment – more tapas, more drinks, and excellent seats. FC Barcelona entertained; Messi came onto the pitch to a roar and a chant, and he blessed the crowd with a beautiful goal.

Of course, we couldn’t go to bed early on the last night. A friend back home asked me, “Did you even sleep?” No, not really, although I’m caught up now. If I had gone to bed that night, I would have missed a group of striking taxi drivers blowing off steam at a nearby pub. As they danced and sang, one last time, my new friends and I toasted our good fortune.

I count myself blessed. I was gifted the trip of a lifetime, in a lifetime of travel. I met great people, ate great food, and packed as much as I could into my time. May you also get the chance to discover and rediscover Barcelona as I did. Thanks to ACIS for giving me the opportunity. I believe I made the most of it. 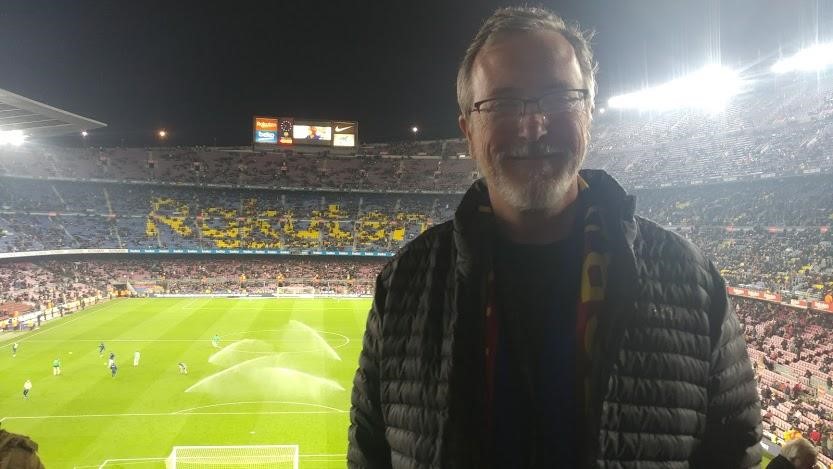 Want to have your own unforgettable weekend abroad? Find out more about our World Traveler Rewards program for teachers!