Johnny Vrba is a high school senior from Illinois. He traveled with his classmates to France, Belgium, The Netherlands, and Germany this summer. We interviewed Johnny about his experience traveling to Europe, what it was like making new friends, and how his tour manager, Jerome, completely made his experience what it was.

Along with his appetite for adventure, Johnny brought a GoPro camera and a drone to which we could attach it along with him on his trip. With that equipment and an eye for the dramatic, Johnny shot and edited this video:

1. Where did you go on your ACIS trip?

I went on the ACIS trip, “Paris to Berlin.” I visited France, Belgium, The Netherlands, and Germany.

2. Was it your first trip abroad?

3. What interested you about the trip/inspired you to want to go?

I had older siblings (cousins) that had studied abroad before and absolutely loved it, so I knew signing up for this trip would be a fantastic start.

4. How was the trip? What were your favorite parts of the experience?

This trip was easily the best of my life. The whole trip felt like a highlight reel but there were a few incredible moments that stood out. First, when visiting Caen there was a student named Vivi in the group who was learning French in school, and we were exploring the amazing castle in the heart of downtown Caen when two locals walked by us and shouted, “bonjour!” Little did we know that quick hello would turn into a full 35 minute conversation right in the middle of the walkway! Others in our group walked on but I stayed, completely captured by Vivi’s enthusiasm in being able to communicate with these two strangers.

Jerome our FANTASTIC tour guide was also intrigued by this, and he stayed in the conversation the whole time encouraging Vivi. As the conversation developed we quickly learned one of the strangers wasn’t from France but from India and was trying to learn his third language…English! So as Vivi would speak French the man would help her along, and she would do the same for his English, it was truly an incredible sight to see. Having no experience in French at all I was surprisingly starting to understand bits and pieces of the conversation, even laughing at the right times. Suddenly Jerome looked at his watch and realized it was already time to go! We had spent all of our time talking! I wouldn’t want my time back for the world.

That was one of the coolest experiences of my life, who knew it could’ve been as simple as a conversation! While I was talking to Vivi about her amazing accomplishment she said, “I have learned more in that one conversation than in one entire year of French class.” So what they say is true, being immersed in a country is truly the best way to learn a language. Secondly are some sights I never wanted to look away from, these include the beaches of Normandy, the incredibly humbling Anne Frank grave stone in Bergen-Belsen concentration camp, and the beautiful canals of Amsterdam, which turned out to be my favorite city of the trip.

5. What inspired you to create a video about your trip? Do you make videos for fun or professionally on a regular basis?

Ever since I got my first GoPro a few years back I loved making travel edits. They started out pretty rough using some free software and soon came the addition of the drone which took things up a bit, literally. This trip was no exception, I lugged my camera bag around every single day to every sight we saw and filmed completely for fun and for my own enjoyment. Doing some sort of marketing/advertising could very well be a future career path for me.

6. How did the trip compare to any expectations you might’ve had before the trip? What was the most surprising part of the experience?

Going into the trip about a year before I was going with one of my good friends, as the trip got closer he decided to drop out. I was very hesitant about going myself at that point because I knew very little about the rest of the kids. Sitting at home now writing this email I’m SO thankful, words can not describe. Any worries I had were abruptly shattered within the first seconds of the trip. I’ll never forget the excitement when everyone was standing in the international terminal talking about what they can’t wait to see on the trip. Everyone’s adrenaline was rushing and that was the adherent that instantly sealed our friendship.

Anything we did throughout the trip we did together and not a single person was left out of the 21 students we had. When it came time to roam around town with smaller groups of three we continued to stay one big pack not even noticing we were accidentally walking ten people abreast in the heart of Paris. That was a total tourist move. Anyway, Jerome would actually have to break us up into smaller groups because of how close of friends we all had become.

7. Did the trip change your perspective at all?

This trip completely transformed my view on the world and on myself. In my opinion, traveling is addictive and the more places you go the better person you become. I’ve never met a person who said they had a poor experience traveling abroad, but if they truly did then ACIS will quickly change that.

8. Do you plan to study abroad or explore other opportunities to travel in the future?

There is no question I will do what ever it takes to study abroad in the future, as well as seeing as much of the world as time allows. Flying domestically will NEVER be the same.

9. What advice would you have for students considering the opportunity to go on a trip like this in the future?

Nike couldn’t say it any better, JUST DO IT. The friends you will make, places you will see, and memories you’ll have for the rest of your life are worth any price.

“Travel Changes Lives” could not be a more accurate statement. I would like to devote this entire question to my tour guide Jerome Mayaud. He could quite possibly be one of the smartest, most well-rounded people I have EVER met in my life. The day we landed and scurried through the airport to see Jerome for the first time was something I’ll never forget. As we all finished meeting with him I quickly ran up to him and introduced myself and we didn’t stop talking until we got to the bus. In those 15 minutes, I realized he was what was going to put this trip over the edge of expectations.

Who knew two people from opposite sides of the world could have so much in common, everything from Scuba diving to drone flying we couldn’t have been a better match. I wouldn’t have wanted Samuel L. Jackson to narrate the sights we saw over Jerome. Also, the way he bonded with every single person in their own special way made everyone’s trip that much more enjoyable. Jerome was always on top of times and made sure we knew when and where we had to be to ensure we could see as much as possible in so little time. I’m sure the three teachers in our group would say the exact same. I hope that served as the greatest compliment someone can give because he deserves nothing less.

Interested in seeing other photos and videos from students on ACIS tours? Check out our Photo and Video Contests! 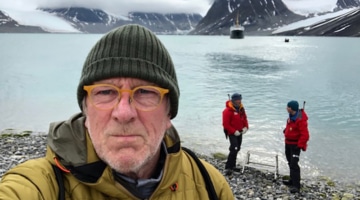 Open
Tag, hug or send a virtual hug today to a family m

Open
We agree with you Peyton, travel’s unexpected ha

Open
Today in honor of the impact and accomplishments o