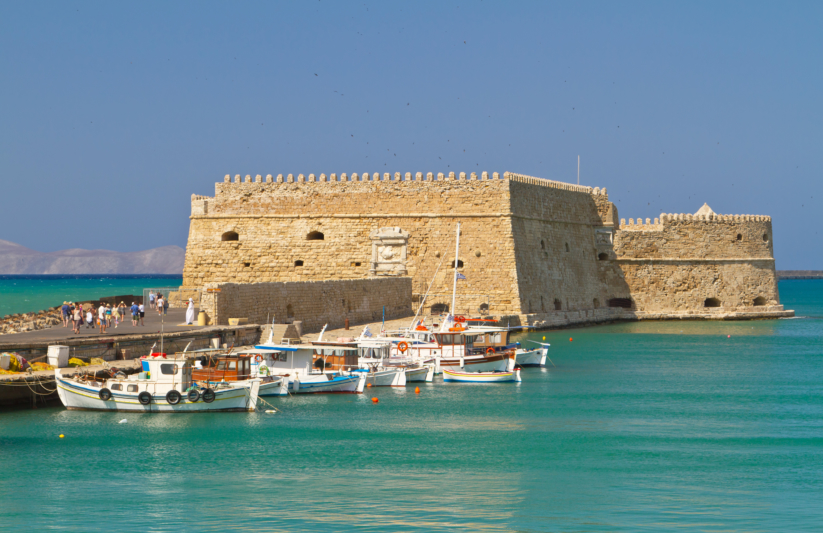 There are over 3,000 Greek islands sprinkled through the Mediterranean, so don’t expect to visit them all at once! Most of them are uninhabited in any case. To make things simpler, they are often referred to in their island groupings: The Cyclades, Dodecanese, North Aegean, Ionian islands, etc. There’s also the Peloponnese, a bit more controversial since it technically only recently became an island following the construction of the Corinth Canal in 1893. But each Greek island is like a unique pearl, so which should you visit? To start you off dreaming, here are some of my top picks, many of which you can work into your next ACIS trip!

Let’s start with Patmos, one of the 12 Dodecanese islands, and a small, tranquil corner of the Mediterranean. Patmos is known as the “Jerusalem of the Aegean” because of its numerous churches and monasteries. Atop a hill, there is a 1000-year-old monastery in which John the Apostle is said to have written the Book of Revelation while imprisoned there. This imposing structure was never ransacked by passing pirates, unlike many other religious sites, and its age-old treasures were preserved. Ten monks still live there, holding Mass for the public, and the Greek government has officially declared Patmos a “Sacred Isle”.

Did you know that Rhodes means “rose” in Ancient Greek? A port between East and West, Rhodes was once one of the richest places in the world. The Colossus of Rhodes, one of the Seven Wonders of the Ancient World, stood guard at the entrance to the port. Built in 280 BC, he stood as high as the Statue of Liberty, but was demolished following an earthquake in 226 BC. The Knights Templar were later given the right to settle on Rhodes, and in return guarded the port. But Sultan Suleiman the Magnificent nevertheless led an invasion in 1522, and the island fell under Ottoman control. There’s still an Eastern feel to the town, where you can find Europe’s oldest cafés serving coffee just as it was made 600 years ago.

Santorini is the most southern of the Cyclades islands, which, according to Greek mythology, were once nymphs who provoked the god Poseidon and were transformed into rocks. Today, a huge crater on Santorini is evidence of another dramatic event: a volcanic eruption 3,500 years ago which destroyed it population. The volcano is now dormant, and the volcanic ash soil on Santorini is excellent for growing crops like tomatoes and grapes, which has led to a flourishing local wine industry. The lava from previous eruptions has now also transformed into black, red, and white pebbles which cover beaches on the west of the island, a contrast to the pure white of Santorini’s architecture, and the pure blue of the surrounding sea and sky.

The largest Greek island and legendary birthplace of Zeus, Crete is an island of high peaks and deep valleys. Its capital, Heraklion, is now bustling and modern, the kind of place where you can get a fish pedicure on your lunch break. But the city supposedly got its name from Herakles, who was tasked with seizing control of a bull that was wreaking havoc in the kingdom of King Minos, ruler of the island. The history of Crete is entangled in legend. The nearby bronze-age palace at Knossos is said to have been the site of a maze in which roamed the Minotaur, half-man, half-bull. Just as amazing is that this 4000-year-old palace had 1000 rooms and underfloor heating! At its heights, 10,000 people would have lived here, in what is considered the first civilization of Europe.

Sometimes considered a peninsula, the Peloponnese is in fact linked to the continent by a long bridge. The artificial canal that runs below it is used by 11,000 boats each year, as well as by extreme sports enthusiasts who like to climb and bungee jump above it. One of the most important landmarks on the Peloponnese is the ancient theater of Epidaurus, among the most famous in the world. Set in spectacular natural surroundings, it held 14,000 spectators who could all hear the actors on stage thanks to the theater’s remarkable acoustics. The Peloponnese is also where the first Olympic Games took place in 776 BC. Since then, both Ottoman and Venetian occupations have left their traces and influences on local culture and architecture, something you can observe if you visit the coastal towns of Kalamata, Patras or Nafplio.