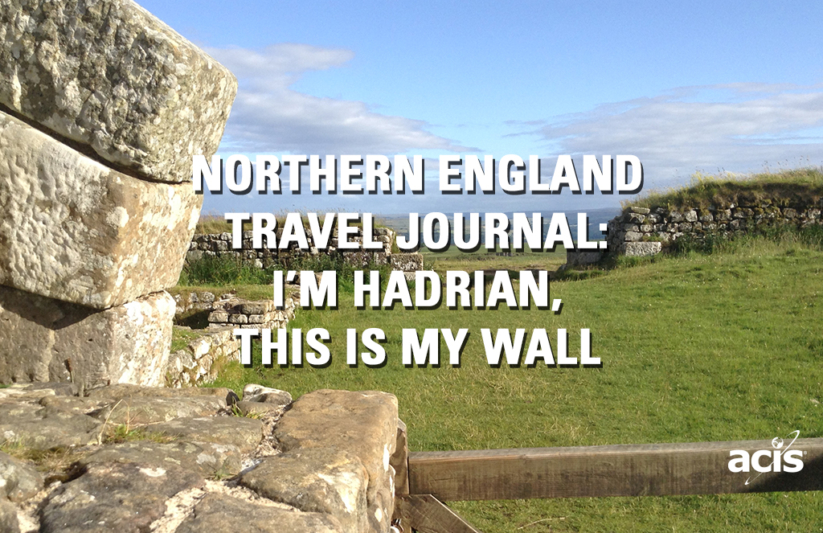 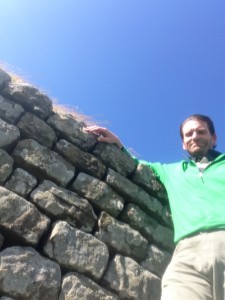 Why are we standing in the wilds of northern England? It’s a good question.

To look north to the horizon it’s the edge of the Kielder forest and the promise of Scotland beyond; to look south, rolling countryside of rough pasture, valley, periodic outbreaks of woodland and an air of being somewhere fairly remote; east and west some dramatic up and down in the landscape, the sense of being amidst a ‘wild’ rather than a ‘tamed’ landscape. Dotted across our views, the white woolly backs and intermittent bleating of the local sheep population.

Under warm blue skies and a gentle breeze, it’s a sublime experience – a sense of openness; of breeze rustling the ground cover of wild grass whilst high above, the plaintive sound of swallows following the thermals. At any time of the year, the counterpoint to such an idyll: unremitting horizontal rain, cloud low enough to kiss the ground and views of greyness; the local sheep even batoning down their hatches and huddling in true bedraggled fashion in anything vaguely reminiscent of shelter. It’s all possible here!

And a landscape of deep heritage.

The wilds of Northumberland.

For all the fact that it’s great to get out into the great outdoors for fresh air and a walk, why stand here looking at sheep?

Time to look beyond the bleating sheep.

Imagine we’re joined by a gentleman of certain appearance – in dress, nothing 21st century about it; relatively rough-hewn clothing; maybe a breastplate; maybe a helmet of roman design; his entourage nearby on horse and on foot; a banner sporting the roman eagle, the letters SPQR. (I know, it’s easy to imagine a scene from ‘Gladiator’ to give us the impression). He goes by the name of Hadrian; his job, Emperor of the great Roman Empire.

But why would the Emperor of Rome be joining us on a sheep spotting expedition? 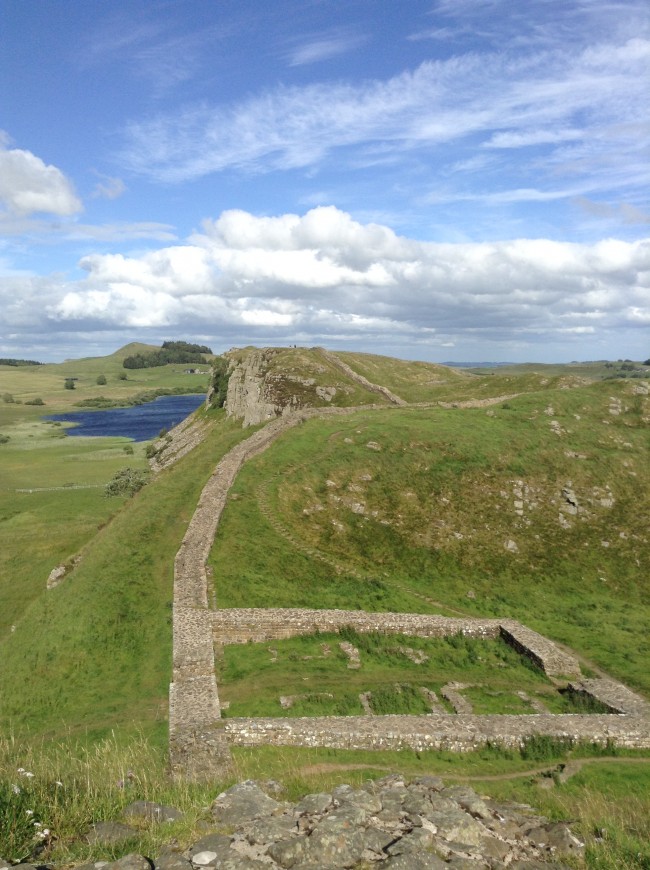 Not sheep spotting but rather witness to an era of world history we continue to learn about and marvel at even today in our world of fast technology: the era of Rome.

To learn of and study the Roman Empire, its extent, its characters, its monumental architectural statements, aspects of its society, its language; nearly always has us looking to modern day Italy for answers and a roman experience – Rome, the heart of empire in the Foro Romano; the Colosseo; triumphal arches and celebratory columns; one-time temples now ancient churches; inconspicuous lumps of marble in more modern buildings or just seemingly forgotten about in parks and gardens.

Equally, to find your inner Roman with a touch of ‘joie de vivre’, you may look to glorious Provence, France – Provincia Romana: arenas in completeness to surpass Rome’s Colosseum (think Arles, Nimes); the theatre of Orange; the likes of the Pont du Gard showcasing the amazing architecture of the era and still studied to this day by students.

That’s just a flavour of the obvious existing across modern day Europe. More lies outside our shores in today’s Middle East and North Africa.

But you can also look beyond the obvious: if you possess a proud inner Brit, it’s easy to tend to that and all things Rome. And what a perfect combination that can be. Hello, Britannia.

To return to Hadrian and our Northumberland wilds.

As we stand surveying the scene, I’m sure Hadrian would explain that he wants some way of marking the extremities of his Rome. There is no interest in pushing north to the barbarian lands beyond (sorry Scotland!). His line in the sand, his mark, is here. It is roughly 73 miles coast to coast at this point in Britannia, one of the narrowest parts. The year is 122AD and his instruction is to build.

From earthen mounds with breach points to allow controlled access north to south periodically along its length, to subsequent wood, then stone; guard posts every roman mile and then periodically a fort to allow shelter, protection and a service point for a garrison; ditch, wall and gate, ditch and military road – this was the orderly brilliance of Rome at work. We might even wish to look on it as Rome’s ‘Great Wall of China’.

Today, to walk it with Hadrian might have him aghast: it remains! How’s that for workmanship! It also has protected monument status. Being a canny lot, Hadrian’s surveyors used the ebb and flow of the landscape to maximise the effect of his protective wall. Dramatic rocky bluffs topped by finely hewn stonework; mileposts protecting every up and down along the way; forts and access points strategically situated (if at times, I’m sure, overly draughty!) making use of the landscape to excellent effect.

Whilst it’s easy to take a look and dismiss what you see as just a collection of old stones (and in places time has left little to reflect on); to pause, look closely, can tell you much about Hadrian and his Rome. Remember, we are in the middle of the northern wilds and yet, every stone used has been precisely quarried and placed, both its face to the ‘barbarian’ north and its face to ‘civilisation’ to the south; in mileposts and gates, archways likewise perfectly formed; and in the forts as they remain, the orderly nature of roman garrison life – barracks, HQ, latrines, even (as at Chester’s fort) a bath house.

Yes, at its pinnacle, you can only imagine what an imposing sight 15 feet of stonewall must have looked like stretching across the landscape. Choose the right spot today and for all of the fact that almost 2000 years (and subsequent local farmers) has taken its toll, even a wall half its original height with the remains of mileposts and forts is still an impressive sight and, not forgetting the dramatic scenery.

In places like Housesteads, Chesters, Vindolanda you have forts and museums uncovering the era of Hadrian; you can walk his history; you can witness everything from coins to shoes, even writing tablets that have revealed themselves to our modern world. The only discriminator in how much you can experience is generally the route you travel and your available time – some of the best bits can feel just a bit beyond what’s easily accessible at times.

But on a warm sunny day, as day visitors melt into the landscape, to walk the wall and experience the wonder of Rome at first hand (even if time-ravaged) is wonderful to do. Even in the sections less dramatic and often guarded by sheep, exquisite moments can be found – it’s not every day you can come across an altar plinth, still in clear detail amidst your grazing future Sunday roast!

It’s hard to guess how Hadrian might feel about the many who walk his Wall. It’s hard to know what he would say to his limit of empire having its own Hollywood fame (‘Robin Hood Prince of Thieves’ – the spot now nicknamed ‘Kev’s Tree’). But almost 2000 years since he commissioned it, it continues to mark our landscape and draw the inquisitive.

If ‘south’ of the Wall is Hadrian’s ‘civilisation’, then here more of Rome can reveal itself: at the other end of the country in SW England, beneath the streets of Georgian Bath, lie the remains of Rome’s Aquae Sulis – bathing complex, temple remains with the main roman baths still hosting their thermal waters; in London you can stand next to the capital’s Roman Wall, beneath its streets the remains of the arena; in York you are in Eboracum, the outpost in which Constantine would be proclaimed Emperor some 200 years after Hadrian’s time, the great medieval Minster sitting on top of the roman HQ. In cities and place names, roman heritage exists (how many places ending in ‘cester’ for instance); even our modern road network can reveal its roman origins.

Beyond the obvious? Quite possibly but that’s Britannia (or, as we more properly know ourselves: Great Britain).

Now, back to thoughts of the man Hadrian (…oh, and roast lamb!)

Check out Rule Britania, our tour featuring Northern England along with visits to London, Stratford-upon-Avon and Edinburgh!

Browse over 100 educational travel itineraries all over the world. From
service learning to cultural connections, find a trip to meet your goals.

2 thoughts on “Northern England Travel Journal: I’m Hadrian, This is My Wall”