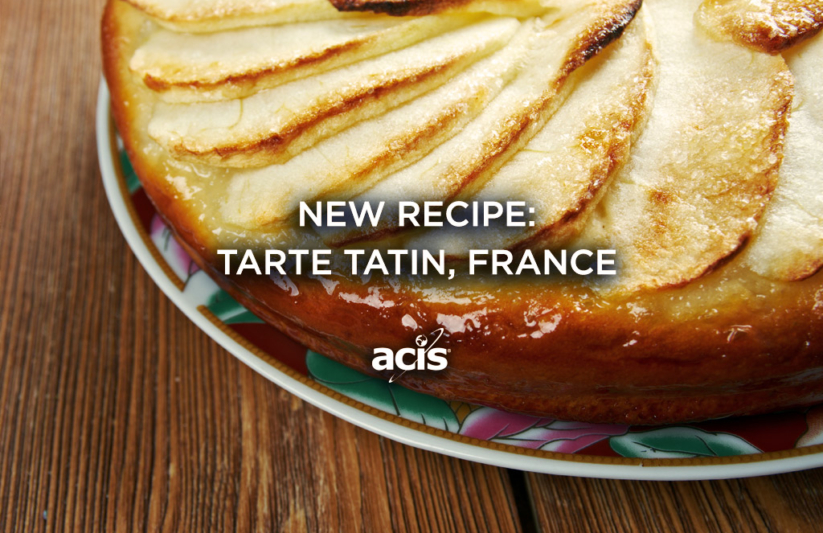 Add a little international flair to your 4th of July Celebrations with this delicious take on apple pie!

You may think of apple pie as a traditional American dish, but it’s also something the French have delighted in for centuries. As it crossed the Atlantic, the wholesome apple pie did indeed integrate a new tradition, and its recipe also changed. But perhaps next time you’re planning to whip up this much-loved dessert, you’ll consider doing something a little different, and trying out one of my favourite French alternative apple pie recipes: the Tarte Tatin.

The most typical French apple pie, or “Tarte aux Pommes”, recipe is not too different to the American version, only there tends to be a thinner layer of sliced apples, no top layer of crust, and cinnamon more sparingly used, if at all. As for the Tarte Tatin, the story goes that it resulted from a culinary mishap which took place in the Loire region in the late 19th century, in a hotel restaurant run by two sisters, Stéphanie et Caroline Tatin.

Over the decades, the tale has been told in several ways. It may have been Stéphanie, or perhaps Caroline, who, having forgotten to bake the day’s dessert, or simply in a rush, or distracted by a client, made an absent-minded mistake. Did Stéphanie unintentionally and clumsily flip over the apple pie as she threw it into the oven? Or did Caroline forget the pastry altogether, only remembering once she smelled the caramelised apples and quickly placing a crust to bake on top of the fruit?

In any case, the sisters flipped the pie back over and nervously served this to their clients, who were delighted with the fruity, caramelised dessert. A tradition was born, and this unusual apple pie became the signature dish of the Hôtel Tatin. It only became know as the Tarte Tatin after the sisters’ deaths, when it started being served in the renowned Parisian restaurant Maxim’s. Today, it is a classic which you can find in brasseries across France.

A few drops of white vinegar

Cream or ice-cream for serving.

You can, of course, buy a ready-made pie base if you wish and skip this first step, but if you’ve got a bit of time, it’s quite simple: cut the butter into small cubes, add into the flour along with a pinch of salt and 1 tablespoon of sugar. With the tips of your fingers, mix the pieces of butter into the flour until you have a light, sandy texture. Then, add about 1/2 cup of water and knead into a ball. Leave in the fridge for at least 30 minutes.

Peel the apples, slice into quarters, remove the core and then cut into thin slices.

In a small pan, slowly melt half of the sugar with 3 tablespoons of water. As soon as the mixture becomes golden-brown, add 2-3 drops of vinegar and half of the butter (1/4 cup). Take off the heat and mix it all together.

Take the pie base out of the fridge and roll it out into a large circle. Carefully place this over the apples and fold in any sections that stick out over the sides of the baking dish.

Bake in the oven for 25 minutes. Remove from the oven and wait 30 seconds before turning over the pie into a flat serving dish. Don’t wait too long to flip it over, or the caramel will stick to the dish. The Tarte Tatin is best served still warm, with a side dollop of crème fraiche or a small scoop of vanilla ice cream.