This guest post was contributed by Ron and Cheryl Sohner, from Hilliard, Ohio. Cheryl is a foreign language teacher with many years of travel experience with ACIS. This article describes her and her husband’s trip to Ljubljana, Slovenia for the ACIS Global Teacher Conference in January.

We are experienced travelers and are always looking for someplace new to explore and enjoy. We were delighted to tour Slovenia and its capital Ljubljana during the January 2016 ACIS Global Conference.

We arrived in Ljubljana, Slovenia at 10:50am after catching a quick flight from Brussels. Our tour manager, Tim Godby, greeted us as we came through customs. We were the first of the group to arrive, so we went to the only place in the airport to get a coffee. My wife and I talked with Tim and our driver for about an hour before the next group arrived. We found that Tim had been our tour manager for one of our groups about ten years prior. When the next group arrived, we boarded our transportation to the hotel. Tim informed the group that 2 more were joining us, but their plane would not arrive until later that afternoon.

We arrived at our hotel located right at the edge of the walking area in the center of the city. Ljubljana received the “Greenest City in Europe” award the day before we arrived. One of the reasons they won was due to the expanded area for pedestrians that covers a major portion of the city. The hotel was a very nice 4 star with a very professional, but extremely friendly staff. We stored our bags with the concierge since our rooms were not quite ready and went out exploring. We walked in a group for a little while as Tim gave a layout of the city.

The rest of the time until dinner was free time, so my wife and I found this cute restaurant that had tables outside with blankets and heaters at each table. It was about 30 degrees, but sunny; we decided to eat inside. Lunch was wonderful. I had chicken with cheese-filled dumplings that were made as jelly rolls and sliced. Cheri had gnocchi with veal and mushrooms in a cream sauce.

After lunch, we strolled the city for a little while before making our way back to the hotel for a quick rest and shower before dinner.

Our group left the hotel for dinner at the Ljubljana castle. We walked a couple of blocks to the Funicular to save an uphill climb to the castle entrance. We were escorted to a lovely room with windows overlooking the courtyard of the castle. The food and wine were superb.

The next morning, we left the hotel for a morning sightseeing tour of Ljubljana, after a magnificent breakfast at the hotel. The buffet had everything you would want and some you may not have thought of for breakfast. The champagne was opened, ready to add the orange juice for that morning mimosa.

As we left the hotel with our local guide Lucy, we walked one block to the heart of the city and the Ljubljanica River which runs through the center of the city. One of the points of interest is the triple bridge that connects both sides of the city. The main area of the city has an old town and new town although because of an earthquake, many of the old buildings have been rebuilt or restored. We walked through the market that is held daily year around. One of the interesting items was the milk machine. Farmers fill a vending machine daily with fresh milk directly from the farm and the consumer either brings a liter bottle or buys one from another vending machine, places the bottle under the nozzle and the milk is dispensed into the bottle. Milk right from the cow, of course, is not allowed/encouraged in the U.S. 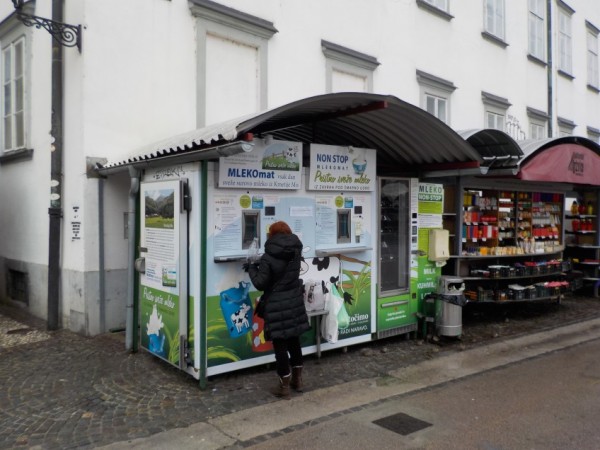 After touring the city, our tour ended with another ride on the funicular and a tour of the castle area. The rest of the day was free to wander the city and take in the sights. We visited the Slovenian history museum and the puppetry museum, which are located in the castle complex. 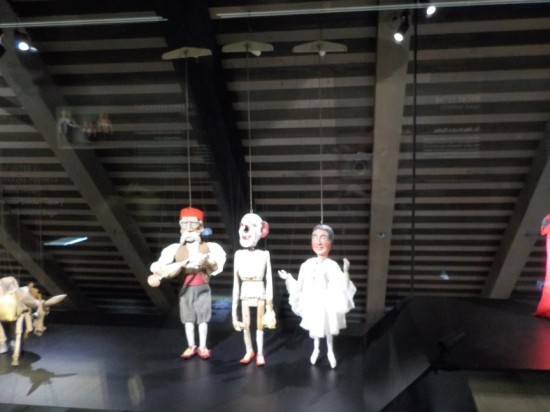 Our trip continued the next day, as we traveled to the city of Bled, an alpine area about 90 minutes north of Ljubljana and very close to the Austrian border. The scenery on our journey was gorgeous. As we approached Bled, the lake appeared, surrounded by mountains with an island majestically situated in the center with a church and a wishing bell in its center. Our boatman to the island rowed us while standing on the back of the 20 seat pletna boat as he has done for 45 years. The island gave us a magnificent view of the Bled castle stately perched on the north shore of a sheer cliff face. Our journey continued to a high mountain ski-resort which lies within the Triglav National Park above Lake Bohinj.

We boarded the cable car to the mountaintop, where a lunch of a delicious stew was served with crusty bread and followed by apple strudel. That was exactly what we needed to warm our insides. After enjoying the wonderful ski resort, we started our return to Ljubljana, with an enroute stop in Bled for their delicious, famous cream cake. We then continued to the Jezersek Culinary Center, in Brnik, where we all had a traditional bread-making workshop and our own homemade pizza for dinner. After arriving at the hotel, Cheri and I decided to take a walk in the city. We stopped at this little food stand to see why the crowds. They were making little pancakes about 1” across. Each order of 10 was individually prepared in about 3 minutes and was topped with chocolate, Nutella, powdered sugar, or jellies of your choice.

Our new day began early as we headed south to tour the Postojna Cave system. This magnificent cave system was hollowed out by the Pivka River over millions of years. We boarded a mining train to travel about 1.5 kilometers into the caves. As we started our 2-kilometer walking tour, we were in awe of stalactites and stalagmites that were 80 to 90 feet in length. Our guide informed us that a 1cm growth in the stalactites or stalagmites takes ten years and we were amazed at their size. 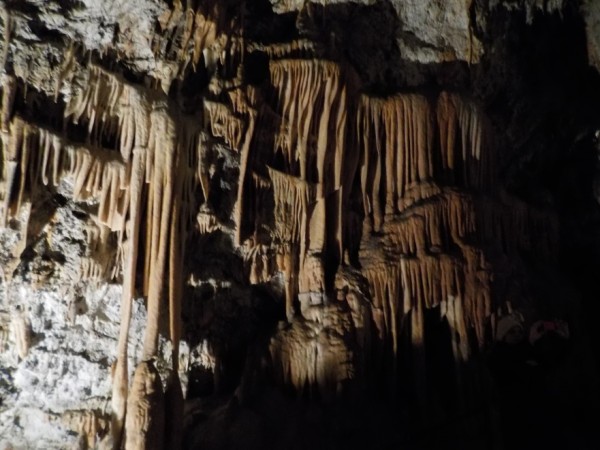 After a quick lunch, we took a very short ride to the Predjama Castle. The castle, dating to 1202, is built into the side of the cavern 123 meters up a steep overhanging cliff. This castle was the perfect defense system with a drawbridge over a raging river, holes built into the walls for pouring boiling oil over intruders, a dungeon (very creepy), several natural water wells and a secret shaft leading back to the Postojna Cave system. After this incredible experience, we returned to Ljubljana for a farewell dinner with traditional Slovenian food, music, dancing, and folklore show.

As our group prepared to depart that morning, we walked to the train station to travel to Zagreb, Croatia. We decided it would be fun to stay a little longer on our own to explore the area further.

Zagreb, Croatia, is about a two and a half hour journey from Ljubljana and is the capital distinguished by its 18th and 19th-century Austro-Hungarian architecture. We arranged for a guide in Zagreb through our local guide in Ljubljana, Lucy. She met us at the train station and we were off on a delightful day in the city of Zagreb. Our guide, Marian, was an English teacher looking for a teaching position, a native of Split Croatia and experienced traveler. We enjoyed our visits to Upper Town with its twin-spired Zagreb Cathedral, 13th-century St. Marks Church and café-lined streets. The city’s main square is in Lower Town and is also where the main shops, museums, and parks are located. 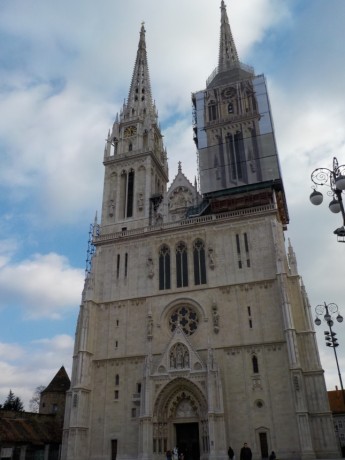 After a long day in Zagreb, and 25000 steps on our pedometers, we found our way to the train station for our journey back to Ljubljana. We were happy to acquire 4 new stamps each in our passport from border patrol agents as we left and entered each country going and coming.

The next day was a day to explore Ljubljana a little more in depth. We walked along the river stopping at little shops and talking with the shop keepers. We found that everyone in Ljubljana was very friendly and enjoyed talking with us. We stopped at the honey store for some souvenirs of all natural honey. Honey is a major industry in Slovenia dating back hundreds of years. We purchased some famous salt naturally harvested using traditional methods dating back more than 700 years. This exquisite tasting salt is used by the finest sushi restaurants in Japan. We also took some time to walk through the marketplaces and revisit some sites that we thought were interesting.

The next morning we were on our way to the airport with fantastic memories of a wonderful journey.

If you’re interested in learning about how to qualify for an ACIS Global Conference, check out our rewards for teachers page!