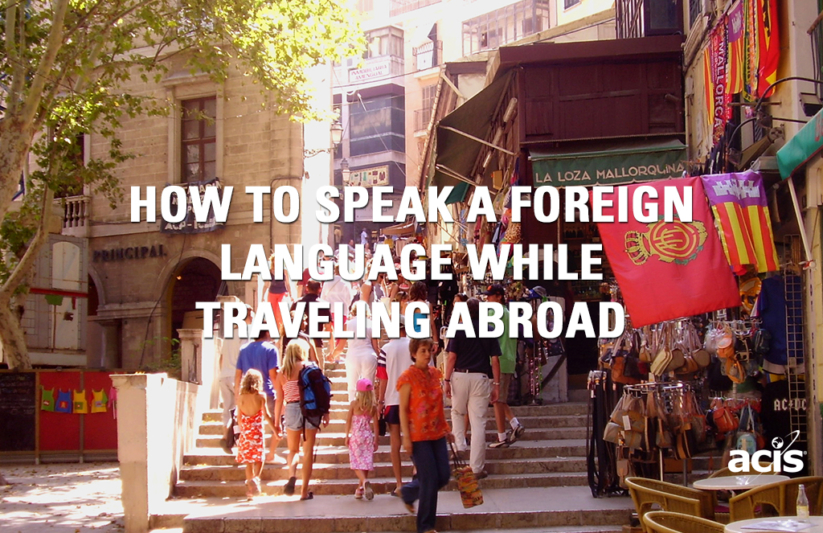 This post was contributed by Kate Webb, an ACIS Tour Manager and English Teacher based in Paris, France.

When traveling in a foreign country, you will encounter many new experiences and a variety of sights and sounds. The language of a country is an important part of its culture, so to become immersed in the foreign society, it is necessary that you attempt to speak at least little of it. Many travelers will have studied the language of the country or countries they will be touring while others will have no knowledge of a foreign language at all. Regardless of your fluency, you will need to communicate with the local people in order to gain the fullest appreciation of the new culture. So how do you deal with the paralysing panic that can take hold the moment you walk out into the airport arrivals hall?

It is easy for a student to become overwhelmed by the strangeness of a new language and to overlook its basic function as a tool of communication – one of humanity’s most fundamental attributes. Language is such a vital element of everyday life that it can be profoundly unsettling to be catapulted into a country where all the speech around you is unfamiliar. Of course, no true mastery of a foreign language is possible without directed study in class. It would be disingenuous to assert that there is any miracle method which will produce fluency in a matter of days. What follows then are some suggested techniques, or a set of strategies to help both the relatively fluent language student and the tongue-tied and terrified to break through that glass barrier.

All in the Mind

So, how can you boost your communications skills in an unfamiliar language? First, and most importantly, think positively. Repeat to yourself that you can do it. It’s all a question of mental attitude. A question which is often posed to fluent speakers is whether they think in a foreign language. In reality, we do not think when we speak. If that sounds more than a little strange, consider that we do not consciously form the thought: “I am going to say ‘that’s a beautiful outfit you’re wearing’” before we open our mouths. Fluency comes from a mental freeing of the mind, allowing a simultaneous association of concept and speech. What works in English works in a foreign language too. So just let go and dive on in. And forget about translating. Life is too short to think out the perfect sentence in English and transpose it into another language. The moment will have passed, the coffee will be cold, the bus will have left.

Observe the facial expressions, hand gestures and body language of the locals, and try them yourself. Bring your acting skills into play and don’t be shy of hamming it up a bit. Really throw yourself into the part and become that cool Parisian waiter, the moody Czech musician or the scintillating señorita.

Enjoy being a different person from the one you are back home. If your tour takes you through several language zones you can switch from being clear and rational in German to flirty and sensuous in Italian. Always try the local cuisine. You will feel truly Greek as you sip your frappe me gala (iced coffee), and Spanish when you tuck into tapas. Give the burgers and coke a rest during your trip and discover how much the regional cuisine can help tune you into the local mood and language.

Take a break from your usual music and immerse yourself in the songs and sounds that grew out of the country you are touring. Tune the TV in your room to the local channel and let the sound of the language wash over you as you are waking up and preparing for the day. You can try learning the advertising jingles. After hearing them over and over it is easy to get the sounds right, and they can be a surprising help with vocabulary. A favourite German one for cat food says, “ Katzen würden Whiskas kaufen ” (cats would buy Whiskas). It sounds great when you say it and painlessly helps you to remember the verb kaufen – to buy, which will also come in useful for Kaufhalle – mall, Verkäuferin – sales assistant and so on. If you are a German student, you will also be thrilled to recognise in action that conditional tense you struggled with in class.

Learn a few words and practise getting the sound just right. Listen carefully to your local guides. They will speak excellent English, but with a touch of that exotic foreign accent that is so charming. You try too. Trick your mouth into making the right sounds for the language you are aiming to speak. Notice the shapes you are making with your lips and how your tongue is used to form a sound. With your friends try speaking English with a pronounced German/French/Spanish accent. You can also make up words which sound right to express being happy, astonished, angry and so on, and develop your own code for each country you travel through.

Don’t attempt complicated sentences which will cause you to panic in midstream. Much better to get a simple phrase like “dobry den”, “Grüss Gott” or “ciao, come stai?” absolutely spot on. Then you can build up your confidence, and your new foreign persona, by always greeting the chamber maid, the waiting staff, the bus driver etc. The idea is to try out little snippets of the language and enjoy them as though they were tapas or different gelato flavours. Be sure too that you always have the local word for “please” on the tip of your tongue. Add it to “the bank”, “the museum”, or “the bathroom” with a rising tone at the end, and you will find you are asking a question perfectly, just like the locals do.

Reading the new language may seem an impossible challenge, but this too can be a lot of fun. Check out the advertisements and film posters. You will probably recognize some of the products and titles, so it is easy to understand them in a different language. Look out for sales slogans in the supermarket and see how they work in action. Prendi due, paga uno, for example, (literally: take two, pay for one). Not hard to work out, once you know your numbers, and if you have studied Italian there a plus, it will help you remember the imperative form of different verb types.

In a café or restaurant, if the menu is written in English and the local language, try to understand both. This is a great way to set yourself up for the next eatery you visit, which may only have a menu in Hungarian or Portuguese or indeed none at all. By the way, don’t be discouraged by waiters who assume you won’t speak their language. This is where your perfectly practised greeting phrases come in handy. Deliver them with a correct intonation and a dazzling smile and you are off to a flying start!

Try to read everything you see posted in the metro or in your tour bus for example. Even in a really unfamiliar language such as Polish or Turkish, you will be able to make out the local words for “entrance”, “exit”, “emergency”, “no smoking” and so on. Ask your Tour Manager’s help if you are not sure of the pronunciation and then just keep practising. Work out the words for “push” and “pull” as well – it gives you an edge when entering a store or restaurant, and remember, your aim is to look and sound like a savvy local. When you buy snacks and candy read the wrappers – sometimes there are quizzes or jokes. Spend a moment working on them and then try them out on your friends – in your most convincing local character of course.

With a little practice and a sense of fun, these tips should break the ice and get you started on interacting with the locals. The best advice for understanding the torrent of friendly chatter that will come back to you is this: simply listen out for a few words you do understand and just hang on in there, riding the wave of clauses and particles–a bit like surfing really!

Kate Webb has BA in English, French and Italian from the University of Bristol. She also speaks fluent German, a smattering of Spanish and struggles along in Swiss German and Greek. A passionate communicator, she lists one of her hobbies as “talking”. She lives in Paris, where she has taught English to both adults and high school students. Kate has worked as a Tour Manager for ACIS since 1985, leading groups throughout Europe.