See our travel policies in relation to COVID-19
Click Here
Germany invented Christmas. Well, it’s a bold assertion and of course by no means entirely accurate – but that said, many of the things we associate with the celebration of Christmas do have their roots in the country. The Germans “do” Christmas wonderfully and a visit to the country in December is a splendid experience.

The most obvious “German import” that both the US and Britain have is the Christmas Tree. This goes back an awfully long way. It is best explained with a comparison. The average Briton can’t explain our revulsion at eating horse-meat, when cow, sheep or pig are perfectly acceptable to non-vegetarians. The cultural source for this revulsion is ancient (horses were once worshipped in Britain) and passed on from generation to generation over the centuries. So it is too with the German love of trees: forests and trees have a place in the German psyche that is quite unique. Ancient Germans worshipped the tree. Bringing a tree into the home at the time of the shortest day and lighting it with candles is a barely concealed pagan custom.

The first documented appearance of the Christmas tree in Germany is the 15th century, but as with all documentation this does not mean it is older in actual fact. There are even stories that connect the Christmas tree with the 8th century Christian martyr, St Boniface (he happens to be the patron saint of Germany). One says that he tried to demonstrate the Trinity to the heathen Germans by showing the three points of the tree and showing they were part of the same body. It didn’t really help him as he was massacred by a group of heathens in modern day northern Netherlands. The stories of his connection with the Christmas tree are, however, unconfirmed.

What might surprise people is the fact that the Christmas tree seemed to be a North German, Protestant phenomenon. Catholics generally had a crib with a Nativity Scene instead. The tree only made it to Austria, for example, in 1816. A popular myth is that Prince Albert, Queen Victoria’s husband, introduced the Christmas tree to Britain after their marriage in 1841. In fact, it had already been brought over with the wife of King George III (America’s last king!), Queen Charlotte of Mecklenburg-Strelitz in the late 1700s. With Prince Albert the fashion of the tree spread from the Royal Family to the Upper and then Middle Classes. It also spread to the United States, where it had become common by the 1870s. 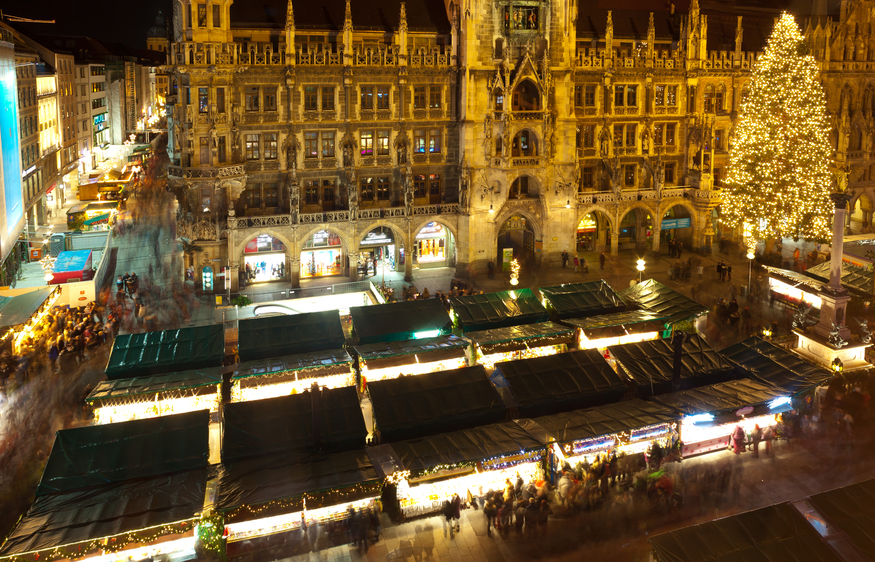 Christmas in Germany starts early. It begins with the time of Advent: many families have an advent ring at home made out of fir branches which is lit with real candles from the end of November onwards. The pre-Christian connection is again so barely concealed. Christmas markets spring up in virtually every German town where people can buy gifts and enjoy Glühwein (similar to mulled wine) in a wonderfully cosy environment that brings light to the dark evenings. Certain cities are famous for their markets: people travel from all over Europe to medieval Nuremburg to see and buy the carved wooden toys, for example. Munich has over 30 such markets. Germans are even getting in on the act in Britain nowadays: Birmingham has a long-established German Christmas market with actual Germans who come over for weeks with their little wooden houses to man them and sell their goods. The Christmas markets last until 24 December and are then all closed up and dismantled rapidly afterwards.

The next marker of the coming of Christmas is St Nicholas’ Day on 5-6 December. This is traditionally the main celebration in the Netherlands too (Christmas there used to be a purely religious festival with no presents). On this night children put out their shoes (wooden or otherwise) and if they have been good they will be filled with sweets. If they have been bad they will find sticks or coal. If they have been *really* bad, Black Peter or Knecht Ruprecht (depending where you are) will put them in his bag and take them away. St Nicholas is more of a North German celebration and the Dutch version, Sinter Klaas, is of course where Americans derive the name “Santa Claus”. In the US he comes on the morning of the 25th: in Germany and the Netherlands he visits a few weeks earlier.

The big celebration of Christmas is on the evening of the 24th of December. Despite its central importance, it is only then that the Christmas Tree actually makes its appearance. The children of a house will be made to wait outside while the tree is decorated. Its look is generally less gaudy than in the UK or US. Pure white lights are usually used, along with glass or wooden decorations. My own German grandmother used real candles on her tree until the 90s. Houses are incidentally not lit up outside as they are in the US (and increasingly in Britain). The most you will see is fir trees that grow in gardens covered in white lights.

Traditionally a bell is rung after dark when everything is ready. The children come into the room to find both the tree, in all its splendour, with the presents below. Depending on which part of the country you are in, they have been delivered either by the “Christ Child” (Christkind), who is a Christ like child figure of indeterminate age dressed in white with a crown, or by the “Weihnachtsmann” (more of an English Father Christmas/ US Santa Claus type figure). The presents are opened on the night of the 24th: this is the height of German Christmas. The British Royal family, with its very close links to Germany, does the same, whilst the rest of the country waits until the morning of the 25th. There are no stockings to fill overnight on the 24th: the job has already been done and Christmas stockings pretty much don’t exist as a custom here.

Food is of course central to the whole experience. Decorated gingerbread houses (Hänsel and Gretel style) are often baked or bought. Stollen is the traditional cake eaten over the period, with English mince pies hardly known. Carp (few Americans would touch it!) is often eaten on Christmas Eve, together with potato salad. Children receive paper plates full of chocolates and sweets on the night of the 24th. Goose or duck is a common meal on the 25th.

There’s a huge practical advantage to putting up the Christmas Tree on the 24th: it lasts through to the 6th of January without losing as many of its needles as it would if it were put up earlier. There is also a great advantage to opening presents on the 24th: parents aren’t woken at the crack of dawn by eager children wanting to open their gifts! Ah, these practical Germans.

The last rather odd custom that should be mentioned of this whole period is New Year’s Eve (“Sylvester”, after Pope Silvester, whose day the 31 of December is). Families sit round to watch a short film called “Dinner for One”. It is a black and white production from 1963 and was produced in Germany (although it was a sketch originally written in Britain in the ’20s). The entire film is in English and Germans therefore assume it is English, when in fact no one has heard of it in the UK. It holds the record for the most repeated TV programme ever. Having watched it, fallen about laughing (the old jokes are the best!) people go out to let fireworks off across the country to welcome the New Year in. 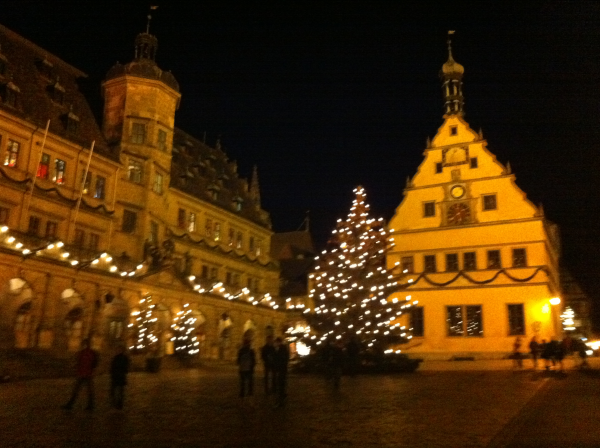 A piece like this cannot do justice to the sheer feeling of cosiness (Gemütlichkeit) that German Christmases involve. It is a magical time which still manages to be overwhelmingly classy and traditional. I have heard Germans who look at brightly coloured English decorations and say they are more akin to Carnival time. No German would be found in a pub on the evening of the 24th as the British tend to: it is a time to be with the family beholding the wonder of the Christmas Tree and sharing presents. I may be biased (I’m half-German) but I can think of no other country where I would rather be at this time.