Traveling in Europe can feel like traveling back in time. Walking down roads that were first laid centuries upon centuries ago, one can’t help but wonder if you’re walking in the same footsteps as Mozart. While the modern world has largely replaced the institutions, places and things that touched the great minds of years past, there are some places that remain in operation from days past.

One of those places is Das Restaurant – St. Peter Stiftskeller. Found in the heart of Salzburg, Austria’s Old Town in the St. Peter’s Abbey, this world-famous restaurant has been serving traditional Austrian food and drink for over 1200 years. Mentioned in a document by the scholar Alcuin, a follower of Charlemagne, in the year 803, St. Peter’s Stiftskeller claims to be the oldest documented restaurant in continuous operation in Europe.

The restaurant has played host to countless dignitaries over the twelve centuries in which it’s been in operation, including cardinals, kings, and in more modern times Bill Clinton and Clint Eastwood. Locals claim that Mephistopheles met Faust here, others say Charlemagne dined here, and some believe Columbus enjoyed a glass of its famous Salzburg Stiegl beer just before he set sail in 1492.

Part of its dining rooms are carved into the stone cliffs under Salzburg’s castle. The Stiftskeller presents weekly Mozart dinners with food and period-costumed musicians from Mozart’s time. 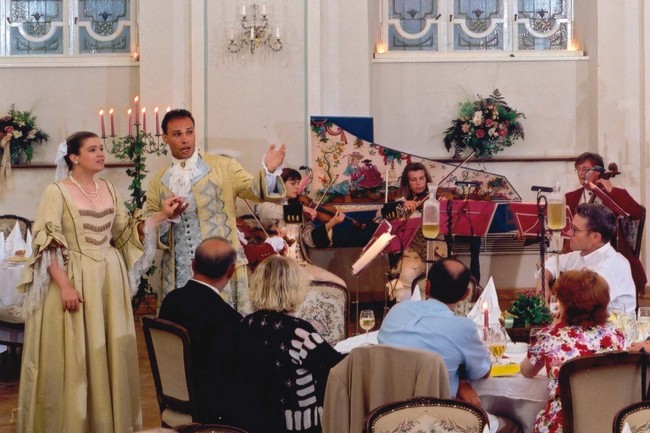 Here are some highlights from the restaurant’s history provided by the timeline on their website:

803 -The St Peter Stiftskeller is mentioned for the first time in a document by the scholar Alcuin who was a liegeman of Charlemagne.

1300 – The St Peter Stiftskeller enters the history of literature thanks to the late 14th century poet and composer, the Monk of Salzburg.

1510 – The inn is significantly extended – Faust knows it to be a place of quality.

1720 – The Stiftskeller changes – patrons now include nobility, clergy and the emerging middle classes.

1760 – Michael Haydn is a resident of the Stiftskeller’s top floor.

1803 – The Stiftskeller acquires the right to brew and serve beer. Prior to this, the Stiftskeller’s padres were only allowed to serve their own wines.

1809 – French troops are given quarters in the Stiftskeller during the Napoleonic wars.

1903 – Abbot Willibald Hauthaler oversees the construction of the Baroque Hall and expansion of the ‘Willibaldhöhle’.

1918 – The monastery cellar is looted during the First World War.

1992 – The first lease agreement in the history of St Peter Stiftskeller is signed. 25-year-old Claus Haslauer is the tenant who takes on this challenge.

1996 – World première of the famous Mozart Dinner Concerts in the historic Baroque Hall. These have since enjoyed great popularity and are performed daily.

2008 – The St Peter Stiftskeller’s kitchen and bar are given a state-of-the-art makeover as part of extensive alterations.

2015 – A report by the Federal Monuments Office Austria revealed that the gate to the St. Peter Stiftskeller is the oldest door in the St. Peter’s district. The gate was renovated and restored to the original state of the year 1710

Check out the rest of Amadeus, one of our many tours featuring Das Restaurant, along with visits to Venice, Vienna and Prague (all of our tours that pass through Salzburg make a stop at Das Restaurant)!