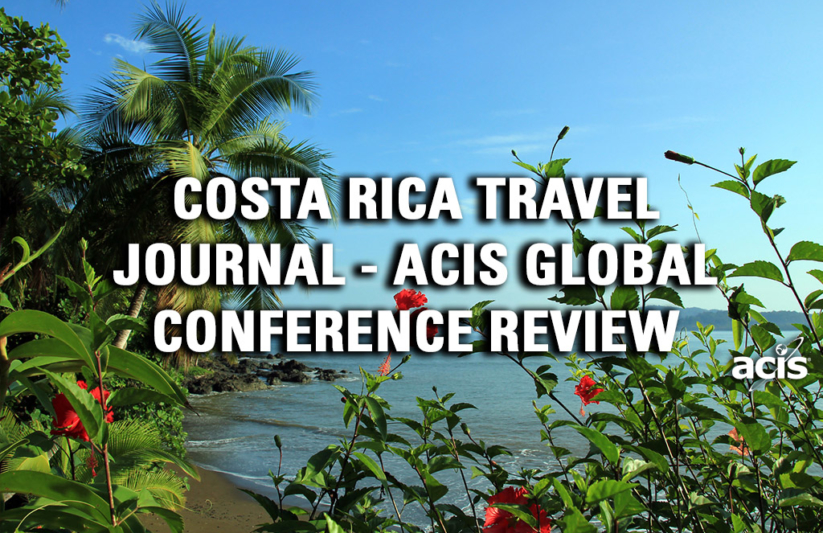 Erin Maliszewski, aka Rudey, is a French teacher, ACIS Group Leader and write (not necessarily in that order) who lives in Chicago. She wrote this recap of her experience on the ACIS Global Conference in Costa Rica on her blog – Rudey’s Room.

“Travel makes one modest. You see what a tiny place you occupy in the world.”

I have a travel bucket list, and Costa Rica ranked high on said list.Alors, when the opportunity presented itself for me to go to Costa Rica for work I jumped at the chance. Costa Rica in January with a group of teachers to learn about travel, ahhh, this sounds dreamy to me. Sign me up!

World travel is a perk of my job as a French teacher who uses ACIS to travel with students and is part of my job description because it’s my aim to inspire my students to seek outside of their known world.

If I want my students to push their boundaries, it’s my role to model how.

Which is why on MLK weekend, I took part in a four-day Global Conference exploring Costa Rica with dozens of U.S. teachers and two tour managers.

Below I’m with Herson, one of our leaders, at an oxcart atelier in Sarchí.

ACIS hires outstanding tour managers and Herson did not disappoint. His sense of humor was charming and on point.

One of my favorite lines of his was, “Once you get to the airport you’re going to see an Oh My God Cinnabon.”

I’d wager he was mostly making it up.

(I’m kidding). He was a fountain of knowledge. On the tour bus, I was often furiously taking notes as Herson spoke to the group about the country, the people, and the culture of Costa Rica. Not only did he give incredible information, but he truly wanted to know and answer what we wanted to find out. He responded to our questions with such skill and depth that my hand was wishing for a recorder.

If he was making it up, he was damn good at it.

After the first day, I was curious, why was the Nativity scene still out on January 14th? In Catholic tradition – the tradition in which I was raised – it is customary to keep the scene up after January 6th when the Magi visit baby Jesus, but January 14th seemed late.

He explained to us why. I was so absorbed in his storytelling that my notes on this failed. That’s why I drew the info from this site. “The Rosary for Baby Jesus Rezos del Niño is the traditional celebration in Costa Rica to take Nativity scene down between January 6th  (Twelfth Night) and February 2nd (Candlemas Day) at each Costa Rican home.  The celebration brings family, neighbors and guests together to pray the Holy Rosary, give  thanks to God for baby Jesus and ask for healing, strength and guidance for the year.”

Below are three different Nativity scenes I saw … I love how the plastic one is right next to the ATM machine at the mall.

It’s different than the tradition I know, and I like that.

Exploring the world pushes my boundaries and opens my eyes to new countries, people, and ideas. When I travel, I always leave refreshed, renewed, and a little changed.

My favorite take away from Costa Rica is pura vida.

Pura vida. The phrase is pronounced POO-rah VEE-dah and in English is it translates to “pure life.”

And yet, the two words pura vida has many different English meanings, such as “take it easy,” “no worries,” “all good,” and “enjoy life.”

I nabbed the deeper definition from this site: “Pura vida! Means that no matter what your current situation is, life for someone else can always be less fortunate than your own. So you need to consider that maybe…just maybe, your situation isn’t all that bad and that no matter how little or how much you have in life, we are all here together and life is short…so start living it “pura vida style.”

In Costa Rica, the ticos (as the natives call themselves) are full of pura vida. Herson had our group saying pura vida multiple times a day, often in chorus on the bus. And it starting to really sink in as ahakuna matter. It ain’t no passing craze.

As we journeyed from the capital city of San José to La Fortuna, Herson pointed out mimosa trees, sugarcane fields, and the cloud forest.

I soaked in the views that were in stark to my day-to-day flatlander, city life. The beauty was a struggle to capture on my iPhone from the bus window. Next time time I’ll rent a car so we can stop along the way to take more images of …

and the bus stops in the cloud forest.

Our first stop was at a roadside fruteria …

Here I sampled mango, guava, and coconut water from the source. I was also reminded that it’s a small world. Over a sampling of mango, I met Maria, who happened to be close friends with one of my co-workers … And people think Chicago is big – maybe it’s shoulders, but the rest, nah.

The next stop of the day was in the rain forest at a Jauri Tropical Farm, an ecological farm that’s owned by a retired principal.

On the Farm, we learned and experienced conservación.

Pura vida and eco-friendly? … I was liking Costa Rica more and more.

This farm would be a wonderful place to come back with students to hear about how to cultivate and harvest different types of native produce and learn some of the culinary and medicinal uses they afford.

We sampled some leaves. One was so tart I wanted to spit it out and other made my tongue feel numb. The one below can be used for make up. Check out my lip color – perhaps my newest look du jour?

In most cultures it’s customary to make a toast if you’re having a drink with friends and family. In America, we say cheers. In French, we say,tchin, tchin. In Spanish, it’s ¡salud!

From the gentleman on the right in the picture below, I learned a new one. ¡Arriba, abajo, al centro, pa’ dentro! It translates to up, down, center, in and down the hatchet  it goes.

Fellow teachers learning how to get the agua dulce from a sugar cane – you need your muscles for this!

By the time we got to the hotel in La Fortuna, I was feeling quite pura vida ...

How could I not … I was greeted with a view of the Arenal Volcano.Pura vida! No worries, the last time it spewed lava was in 2010 and it’s now in an indeterminate resting phase.

The first night the Volcano was mostly covered in clouds, but it’s imposing presence was a dreamy sight.

Here you can see the base of the volcano …

I stayed by myself in a casa on the sprawling grounds of Arenal Manoa … This was still so huge for me as I spent a good chunk of my youth battling my fear of Freddy.

I’ll admit that I was a little uneasy at first – is the slider locked? can someone open it from the outside? – but my terror quickly passed as I was lulled to sleep by the sound from my room the first night. It was so much better than the noise app on my phone.

The first night, I soaked in the constellations and soul warming views on the hotel grounds.

And bathed in the hotel’s thermal hot spring pool for a couple hours with fellow travelers.

We spent most of Day 2 in the Rain Forest. It was pura vida exploring the wildlife on a boat on the Río Frío. This río stretches across northwestern Costa Rica and into Nicaragua.

The start of the safari cruise …

The other tour manager, Eddie, on our group’s other boat …

Giant iguanas sunbathing/resting in the trees … they were enormous!

The iPhone camera didn’t do justice to the incredible wildlife I saw on this jungle ride, so I’ll mostly just tell you a little bit about it.

We saw several Jesus Christ lizards. They walk on water! Check it outhere …

We spotted a sloth. I was pretty geeked. Not as much Kirsten Bell on the Ellen Show talking about her sloth encounter. Click here for the heartwarming watch.

Look to the right of the V on the tree and you’ll barely see six teeny bats. Herson said they’re called long-nose bats …

The tree of life – the Caypa tree – was serene. Seeing those trees on the Rio Frio filled me with peace and a feeling of interconnectedness.

At one point, we heard crazy loud barks. At first, I quirked my head and wondered what on earth are dogs doing near the river. Nope, the noise was howler monkeys.

This is what I was seeing but didn’t have the means to capture it this way … The monkeys made me squeal in delight. No lie. It was incredible to see monkeys in the wild.

My camera didn’t capture the spider monkey like this …

Here’s mine … They jump and swing so fast, and in the middle of trees, that the pic was hard to shoot … Robbie Gallant’s camera was clearly better than mine.

The next stop of the day was at the Baldi Hot Springs near the Arenal volcano. This was a treat.

I felt relaxed dipping in the healing mineral waters. The 25 thermal pools ranged in temperatures from 100 to 150 degrees. I’m not positive that I tried the hottest, but the one near the caves was so hot it turned my legs immediately red. But the scalding hot waterfall in the cave felt incredible on my back!

The last day, we stopped in Sarchí and toured an oxcart factory. Sarchí is known for it’s oxcarts and it was a major industry in the early 1900s as the carts were used to haul coffee.

This guy told us all about the history  …

The carts are handcrafted and gorgeous. We learned if we were to tour with students here, they could paint their very own ox cart wheel. Hands-on cultural experiences is one reason I choose ACIS for student travel. Their philosophy of travel connects what is learned in the classroom to first-hand experiences in the world.

I loved the juxtaposition of these wheels on the blue wall …

The last morning, I took a little stroll of the hotel grounds. I like to bring my running shoes to explore areas of places I visit. I usually run, but this time, I walked …

Beware of the caimanes …

The fence around the hotel …

I stopped in the hotel restaurant for breakfast and saw that the volcano was coming out.  A little at first …

and then a full view …

The best was saved for last. On the final day, we ziplined above the forest canopy. Wow! I I could have swung above the trees all day.

We did 8 zips. All but the first were through the trees and the longest was 800 meters.

We did one Tarzan Swing. That was a blast. (Clearly :))

It was a remarkable trip (Gracias ACIS). I met so many wonderful people, tested my Spanish, and experienced a new side of life.

I’m already dreaming up my next trip there. This time I’ll head to the coast. Until then, I’m enjoying the Peaberry Coffee I brought back.

I will always remember, pura vida.

P.S. If you like pura vida, check out these bracelets.

6 Spanish Classroom Lesson Plans to do with Your Students Based
on the New Bloom’s Taxonomy For World Language Instruction.