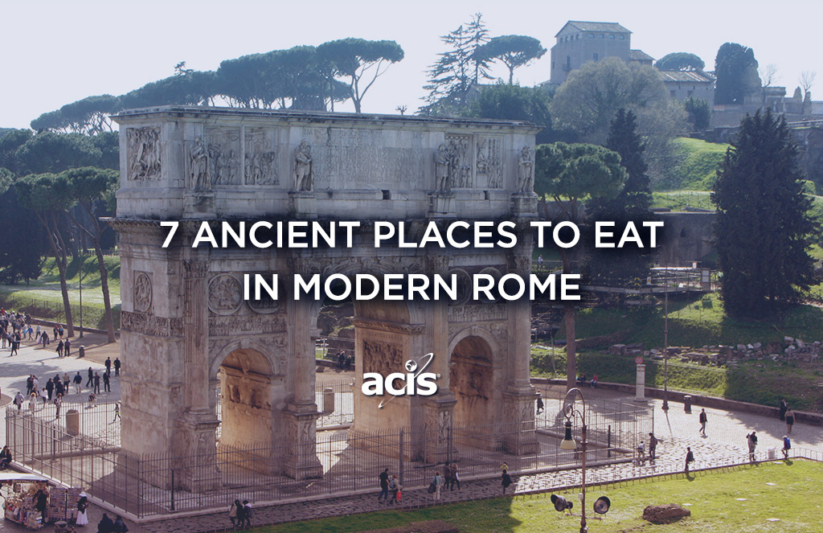 Skye Shirley is a teacher, writer, and spoken Latin enthusiast whose immersive lessons embrace the most recent and convincing research into second language acquisition. She has presented on pedagogical topics both in the United States and abroad. During the academic year, she teaches Latin at Brookline High School, a diverse and innovative public school near Boston.

Ask anyone what they think of when they hear the name “Rome” and the response is usually “history and food.”  Countless travelers explore the Forum or Colosseum, work up an appetite, and decide to press pause on the historical part of their trip in order to grab a bite to eat from one of Rome’s many incredible restaurants.   But what if you didn’t have to choose between ruins and ravioli?

From gourmet dining to fast food, here are seven restaurants in the city that cater to history as well as cuisine. The next time you’re in Rome, imagine eating…

Where Ancient Roman Food is Still on the Menu:

It’s no surprise that Caesar Augustus, the first emperor of Rome, had many slaves.  According to the Roman custom, masters were expected to provide funerary arrangements for slaves they freed, and these different social classes were often placed side by side in columbaria, which were small niches for holding urns.  The freed slaves of Augustus had their own tomb structure.  Not only is Hostaria Antica Roma located within the tomb, but it also features a menu of ancient food.  You won’t see tomatoes, chocolate, or any other post-Columbian food listed there, because those weren’t yet available to the ancient Romans.  Instead, the offerings are drawn from the recipe book written in Latin and attributed, though perhaps erroneously, to a 1st century A.D. foodie– Marcus Gavius Apicius– so expect to see dishes far from usual Italian menus.

Dish to try: Patina cotidiana, Latin for “daily dish” which is like a mix between an omelet and tomato-free lasagna 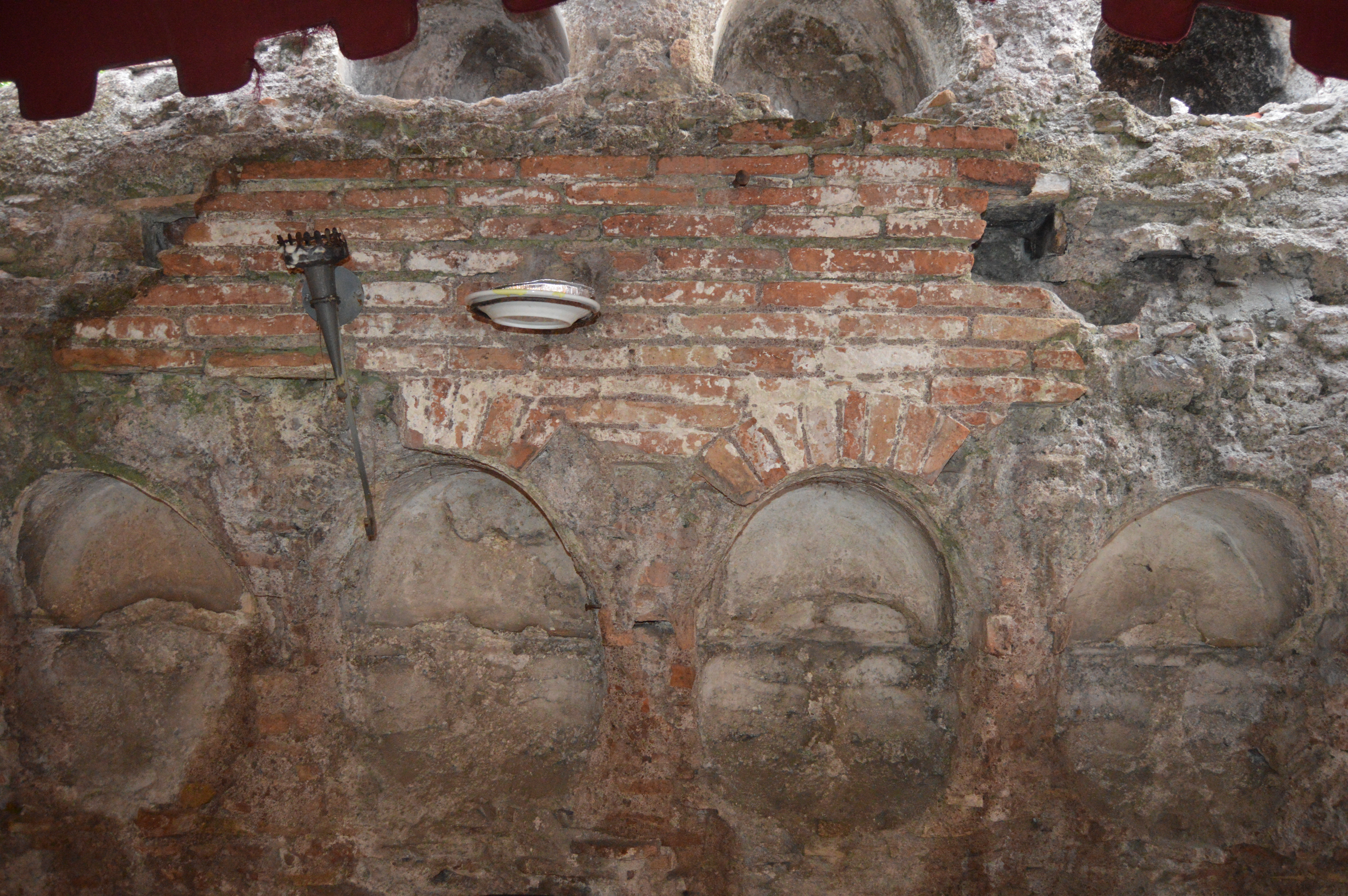 Archaeologia on Via Appia

The wealthiest Romans, like Caesar Augustus, could afford separate tombs for their freed slaves, but how would the masters themselves be buried?  The rich built grandiose tombs so imposing that it’s surprising to remember that the whole structure was often built just to hold one small urn. Like the pyramids of Egypt, these tombs were designed not just to house the dead, but also to dazzle passers-by and boost a family’s reputation.  Roman law dictated that no bodies should be buried within city walls, so the roads out of the city were lined with these ancient graveyards. Archaeologia on Via Appia is built into one of these structures, and is a perfect dining location after a day walking or biking along the more rural part of the path through ruins and cypress trees.

Ancient food, modern roads – Be sure to take a taxi for these restaurants near the Via Appia, as the crossing here can be tricky here for pedestrians. 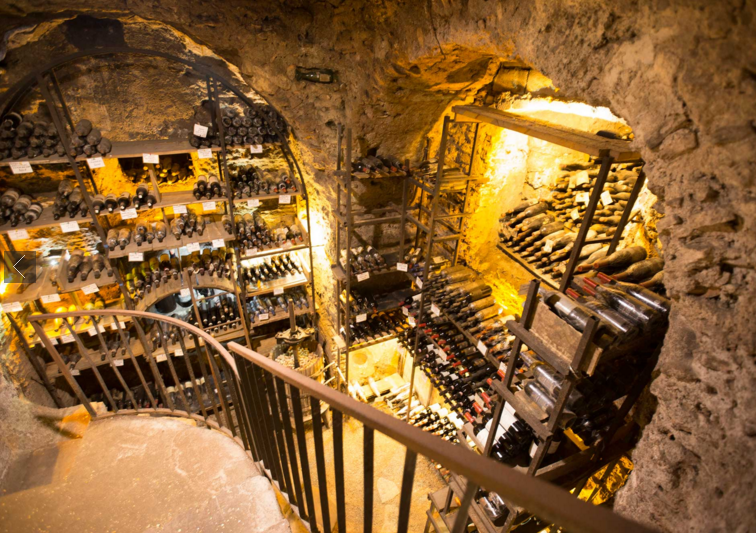 Where Caesar Was Stabbed:

Julius Caesar was indeed famously killed in 44 B.C. during a senate meeting.  Yet this didn’t take place in the senate house which still stands in the Forum today, because that one was being rebuilt at the time. Instead, the meetings took place in the courtyard in front of the Theater of Pompey. This expansive structure with its nearby porticoes now lie hidden beneath a modern buildings, but a visit Ristorante da Pancrazio will bring you close to where the act actually happened.  The outdoor seating may be temptingly picturesque and include free street music, but ask for a table in the lowest floor of this restaurant, where you can eat among the ancient arches and walls from the time of Rome’s republic. Look for the “opus reticulatum” pattern of bricks to tell modern from ancient walls, and be sure to look just above the staircase for a diagram showing which part of the theater the restaurant is in.  You may have been in the back section of the theater in Roman times, but you’ll feel you have a front row seat to history in this space.

Dish to try: Bucatini all’Amatriciana, a hearty pasta dish with a red sauce and bacon 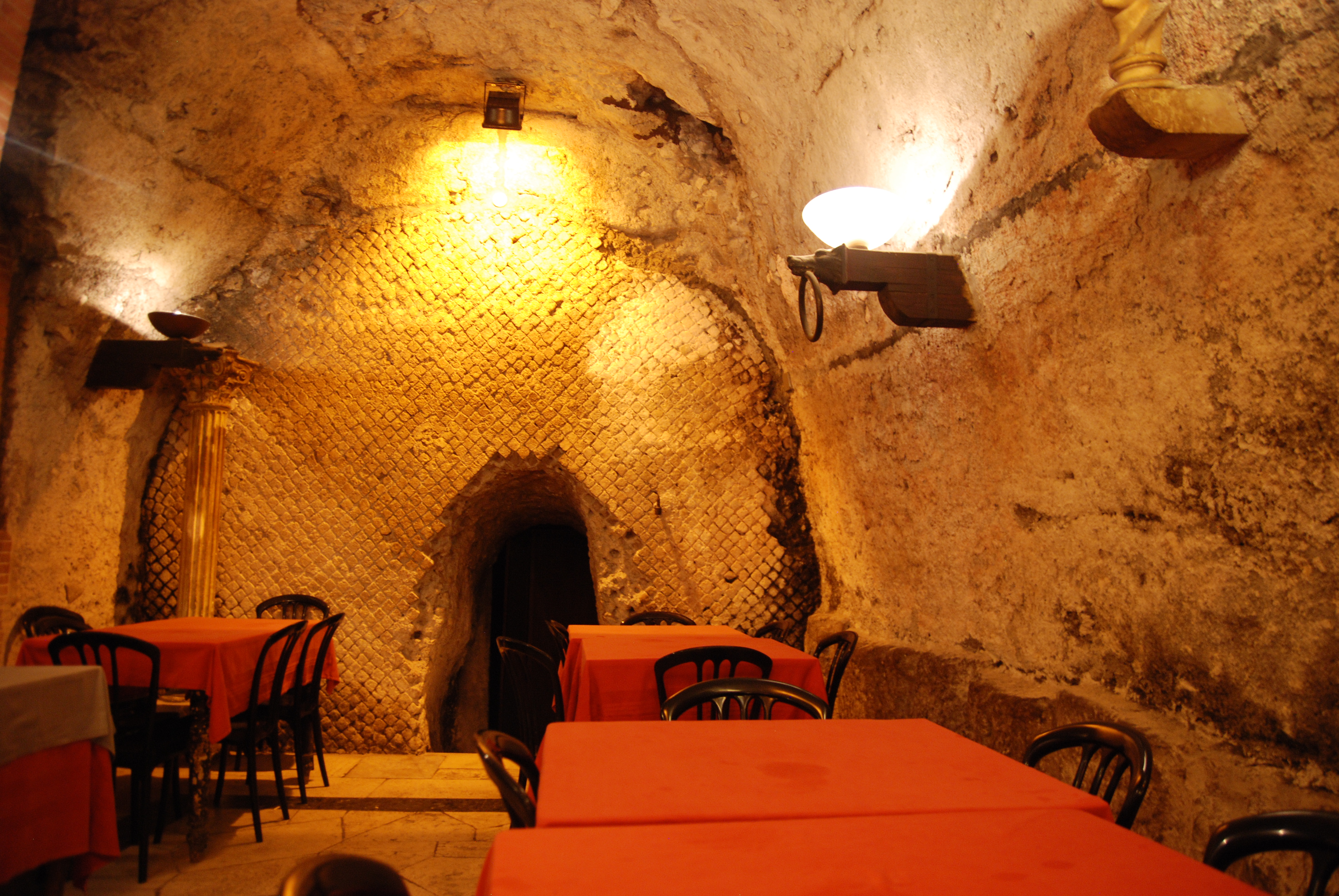 Where the Walls Are Made of Ancient Pottery Shards:

Flavio al Velavevodetto has a glowing reputation among Romans for its delicious meat offerings, and ever since it was highlighted by Anthony Bourdain, it’s so popular that it’s wise to reserve weeks in advance.  The cuisine is superb, but inside you can also see layers of urban history. The building, like many others in the neighborhood, is literally built into the side of an ancient Roman trash dump so big that it’s considered a man-made mountain called Monte Testaccio.  It all began with a few amphorae, vessels used to transport olive oil across the empire.  Enough olive oil was carried up the Tiber River and consumed by Romans as lamplight, moisturizer, and flavoring that their empty containers were stacked until the trash rose several stories high, creating the Monte Testaccio site.  Access to the hill is limited because it’s an active archaeological dig, but by dining at Flavio al Velavelodetto, you can see beyond glass walls to cross-sections of broken amphorae.  Order some olive oil with bread and you’ll continue the custom that created this unique monument. 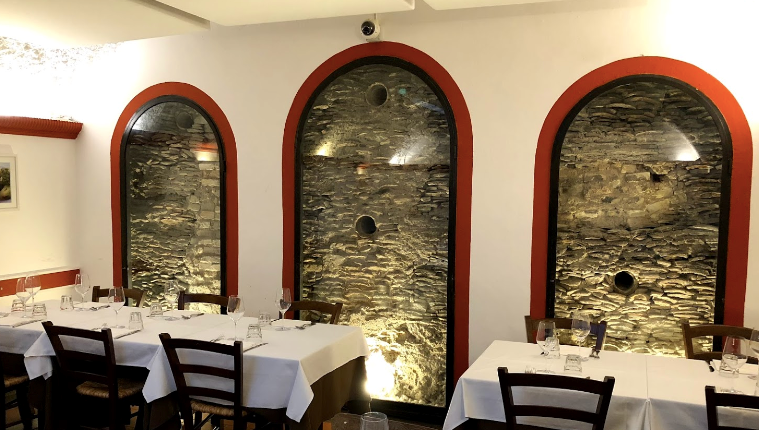 Where the Wine Cellar is at Ancient Street Level

Before the Jewish population of the ancient city settled in the Ghetto neighborhood, many of them called Trastevere home.  Trastevere came from the Latin trans Tiberim, literally meaning “across the Tiber River.”  Here you can still see the Hebrew inscriptions outside the restaurant from its first inhabitants, and the history doesn’t stop there.  Ask permission to visit the wine cellar which dates back to 80 B.C., was where several famous sculptures were discovered before being placed in the Vatican Museums, and is so lovingly protected by the Archaeological Superintendent that even the wine bottles can’t touch the walls.  From synagogue to convent, home to restaurant, this space has gone through many transformations throughout the years and each era has left its mark. Before your visit, explore the restaurant’s website for even more information about its fascinating past.

Dish to try: You can’t go there without trying the Crème brûlée, which everyone raves about. 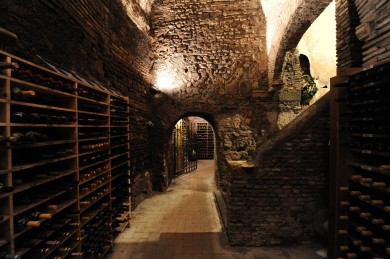 Emperors frequently undertook grand building projects like public baths to secure a positive image and contribute to the city’s growth.  The baths of the emperor Diocletian may have been a late addition to the ancient city– they were finished in the year 306 A.D.– but their impact continues to be felt in Rome today.  The baths can be toured as a museum or you can visit part of the site for free by entering the church of Santa Maria degli Angeli e dei Martiri, designed by Michelangelo using some of its ruins.  What you might not know is that one circular chamber of the sprawling complex has been converted into a restaurant. When I was there, the waiters were fantastic with the children in my group; this is a great dinner place for visitors of all ages.

Dish to try: Their classic and delicious Tiramisù, loved by tourists and locals alike 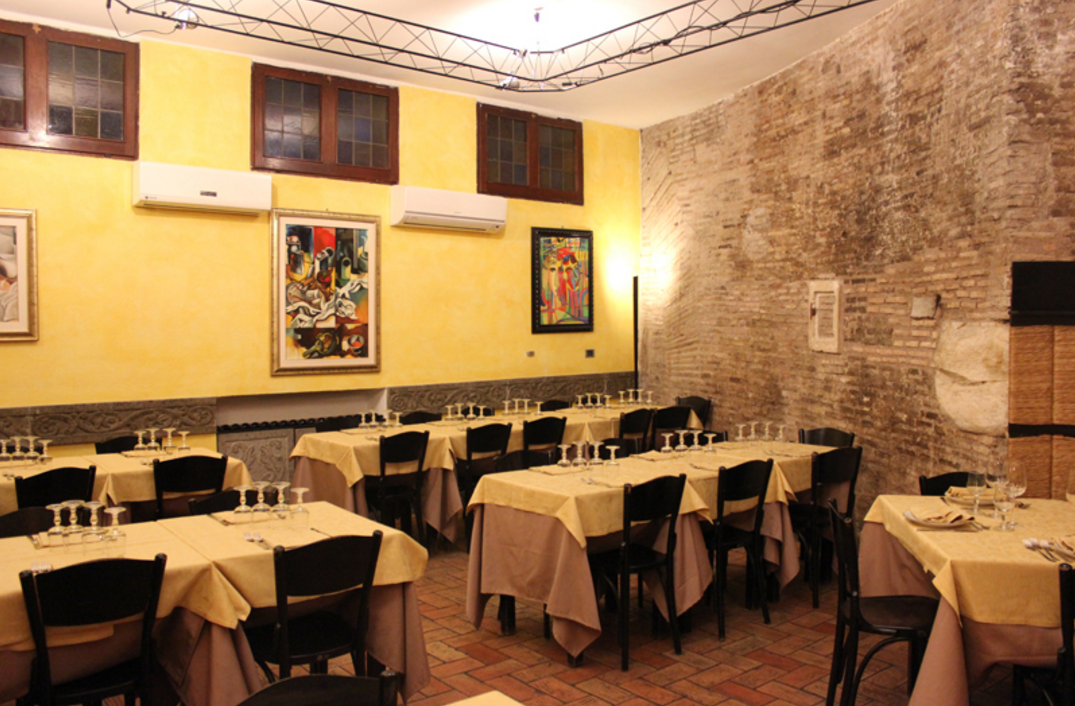 Where the City Walls Work as Room Dividers

While McDonalds might not be the first restaurant on your list in Italy, for those stuck waiting for a train, even this affordable dining location offers food with a side of history. The word in Latin for Bath is thermi, originally from the Greek word thermos, meaning “heat.”  Because the city’s major train station was built so close to the baths of Diocletian, it is called “Termini” today.  The ruins you see while waiting for your train aren’t of the baths, however. Outside the station and even splitting the dining area of the McDonalds inside, you’ll see huge blocks of tufa stone from more than 600 years earlier.  These are the remains of an early wall around the city, said to have been constructed during the reign of the king Servius Tullius. 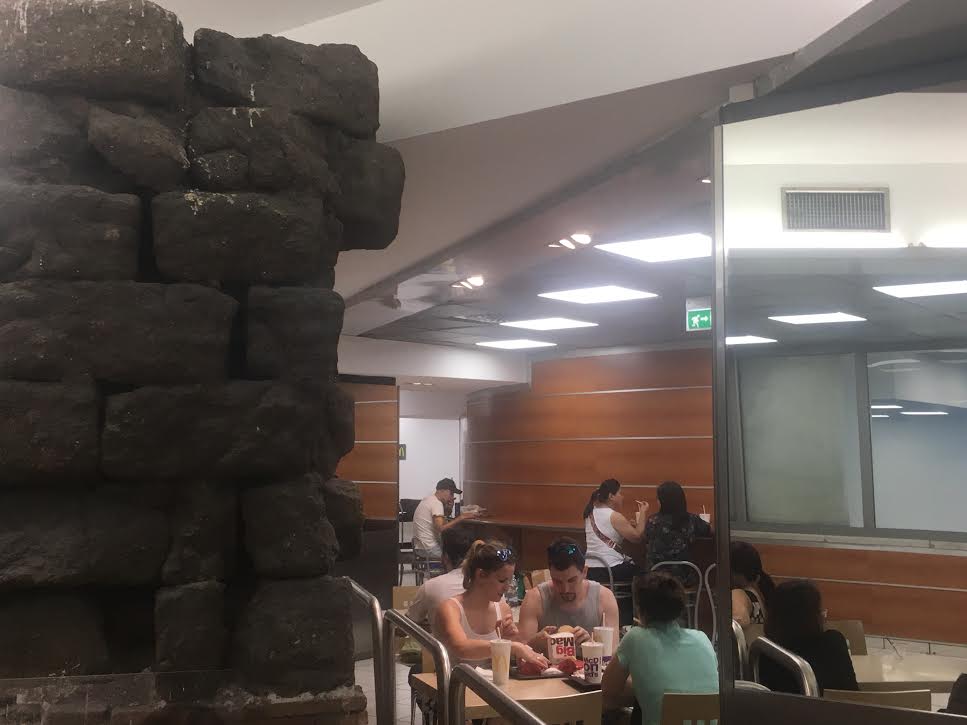