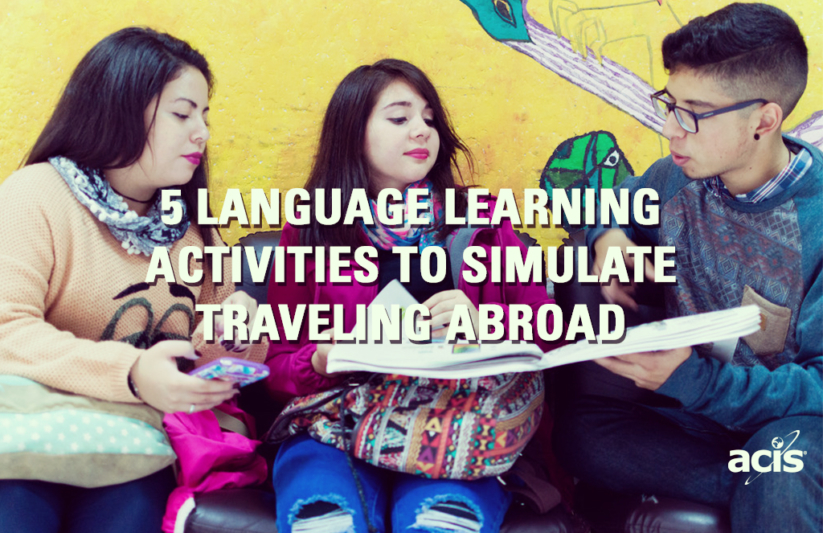 While the value of traveling abroad is well-known, what about students’ time between trips abroad? How can educators create an environment that simulates an immersive environment where listening, speaking, and thinking in a foreign language is the only viable option? That’s where creative lesson planning comes in.

One of the most common ways in which students traveling abroad practice their language skills is walking into a shop and placing an order. Sometimes the shopkeeper won’t realize they’re foreign until they open their mouths, so they have a golden opportunity to speak and be spoken to in a foreign language. That’s exactly the scenario you can create in your classroom! Whether it’s a bakery, a boutique, or record store, create a marketplace environment where a student or group of students play the shopkeeper and a different set of students are the patrons. For intro-level students, you as the teacher could be the patron or the vendor (instead of both parties being students). Whoever is involved, having the discipline to not break from the language is the key.

There’s nothing like a social gathering to get people mixing and making conversation. Assign your students different characters to play (movie star, a political figure from present or history, athlete, musician etc.) and have them all attend a soirée where they can get to know “each other” in a foreign language. At the end of the party, they have to report on several things they learned about 4 or 5 different characters at the party. It’s also a great opportunity to shed some light on the national culture about which you teach as both the list of national personalities and the food and drink (age-appropriate, of course) can present opportunities for your students to make personal connections with the subject matter.

3. Read Foreign Newspapers/Magazines as a Class

There’s nothing quite like experiencing the news media of a foreign country to make you feel like you definitely did not wake up in your hometown that morning. You’ve probably read a newspaper/watched a newscast hundreds of times at home, so seeing that same information transmission occur in a foreign language is enough to make your brain do a double take. It happens all the time when you’re abroad that you experience something that would be mundane if it happened at home, but it’s fascinating happening in another language. With your students, assign them a newspaper article, news video, or magazine article and have them break into small groups to discuss. For students still beginning in learning the language, you could borrow from any of the newsinslow__.com’s (French, Spanish, Italian, etc.).

4. Watch TV/Movies in Foreign Languages as a Class

Films are another fantastic way to transport your students into another world. Whether it’s traveling back in time or into another culture altogether, films are an immersive environment all to themselves. Anyone who has completed a home-stay in a foreign country will undoubtedly have some memorable experiences watching television with their host families and deciphering the meaning and plot of what was happening on-screen. It’s a challenging, yet enlightening way to grow your students’ language acumen. Finding an age-appropriate film or tv show can sometimes be challenging, but there are enough films from which to choose that it’s certainly not insurmountable (Disney movies dubbed in a foreign language are a great place to start).

One last great way to both expose your students to the national culture about which you’re teaching and give them the chance to think in a foreign language is to recreate a travel agency in your classroom. Students can pick a specific region or destination and prepare a short presentation about what there is to see and do there. The rest of the class can then ask questions about fun activities as well as what the weather, food and culture are like. To take it even further, they could then create a travel brochure about their assigned region to turn in as an assignment.

Turning your classroom into an environment where your students need to think differently is always the goal. Using these specific methods to inspire your students to feel and act like they’re in a foreign culture altogether is the next step in that process before they leave the country and experience the real thing!

What activities do you do with your students to simulate traveling abroad? Let us know in the comments section below!

4 Photo based activities to do with your students and enhance your curriculum.