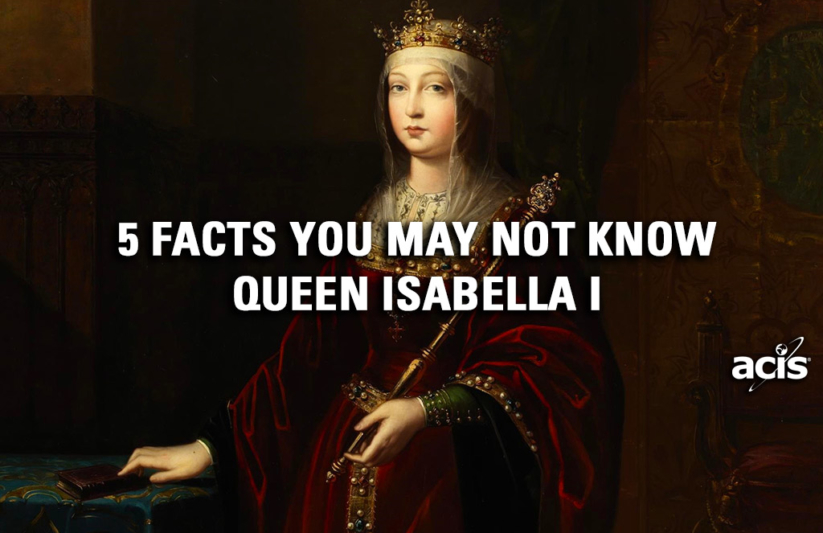 Isabella I was the queen of the central region of modern-day Spain known as Castile and ruled from 1474 until her death in 1504. She was born on April 22, 1451 in the town of Madrigal de las Altas Torres. Isabella reigned with her husband Ferdinand II of Aragon, which was a region in northeastern Spain. Often referred to as “La Católica” (the Catholic), a title given to her by the Spanish Pope, Alexander VI. During her reign, Isabella and her husband equally shared power and established a code of law, strengthened the monarchy and enabled the dismantling of powers of the nobles within the country.

Queen Isabella I is a powerful and iconic figure in Spanish history whose life story is a fascinating read. Here are some interesting facts about Isabella for Spanish language learners or anyone interested in expanding their Spanish knowledge!

Quite possibly her most impactful accomplishment on the world, Queen Isabella funded Christopher Columbus’ mission to sail to India by heading west. The Spanish Queen agreed to pay a sum of money as a concession from monarch to subject. Columbus would set sail on his famous voyage on August 3, 1492 and as history would show, he did not reach his intended destination but instead discovered the Americas. After his return to Spain, Columbus was greeted with a hero’s welcome and started a Golden Age of exploration and colonization, which brought even more fame and fortune to Queen Isabella I.

2. Her Husband, Ferdinand II of Aragon, was Her Cousin

The marriage between Isabella and Aragon was arranged when she was just six years old. Isabella’s half-brother King Henry IV of Castile arranged it as well as attempting to line up several other suitors. Isabella managed to evade all of them and remained adamant on marrying Ferdinand. To legally marry Ferdinand, she needed to obtain a dispensation from the Pope. The couple then secretly married in 1469, which subsequently united Eastern and Western Spain turning the nation into a dominant European power.

3. The Spanish Inquisition was Established Under Her

Isabella was a pious Catholic and in accordance with the Catholic Monarchs, pursued a policy of religious and national unity. She believed it was necessary to ensure doctrinal uniformity to the Church and with her husband started the Spanish Inquisition in 1478. It was dictated that all Jews and Muslims in Spain either convert to Christianity or be exiled. An estimated 40,000 Jews (half of the Jewish population) emigrated from the country. In an attempt to bring unity this caused massive religious tension and violence.

4. She Was the First Woman to Appear On a US Coin

Queen Isabella was the first named woman to appear on a United States coin. In 1893, 400 years after Christopher Columbus’ maiden voyage, a commemorative quarter was issued. That same year, she also became the first woman featured on a commemorative US postage stamp. Isabella was featured alongside Columbus on the eight-cent stamp.

5. She Was Outlived by Only 3 of Her 5 Children

Isabella and Ferdinand had five children: Isabella, John, Joanna, Maria and Catherine. All five of the children married but Isabella and John died before the Queen without lasting offspring. Joanna was nicknamed “Joanna the mad” for her mental instability and married Philip the Handsome. Catherine of Aragon first married Arthur Tudor, Prince of Wales, and then after his death the brother King Henry VIII of England. Catherine’s marriage made Isabella the grandmother of Mary I of England.

Interested in learning more about Isabella I? Check out our latest set of lesson plans in our Monarchs Who Shaped History series about the Spanish Monarch!

Lesson Plan on Queen Isabella I