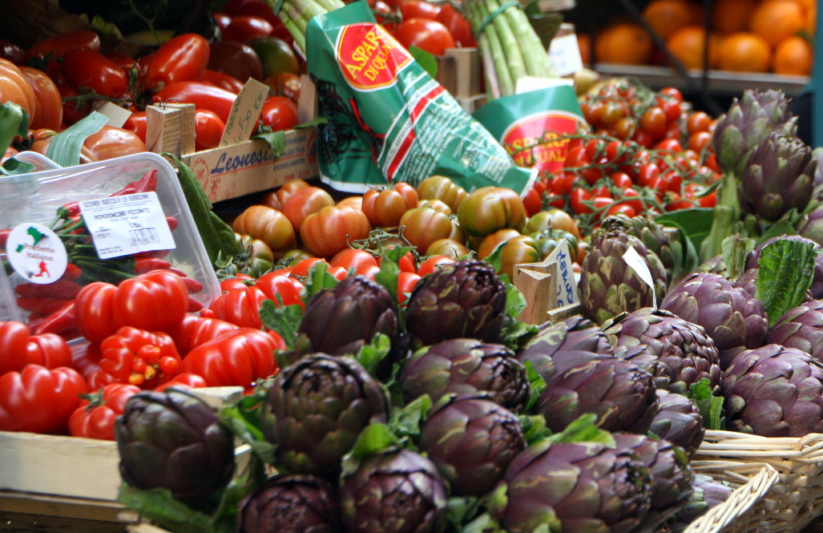 In many European cities, the marketplace is the belly and nerve center of the town. It’s where farmers and producers from the surrounding regions gather every week to sell their wares and catch up on gossip. It’s where you can learn to haggle, listen to local dialects and hear good recipe ideas. The best markets are the noisy, bustling ones, where you have to push your way through the crowds and shout to be heard above the fishmongers and flower sellers. Wherever you are in Europe, go seek out the marketplace, there’s always something interesting to be found there. Here are 3 markets to visit in Europe on your next educational tour with ACIS.

Ballaró is the biggest of the three markets in Palermo, and it’s open 6 days a week. It’s also the oldest market: an Arab traveller already wrote about it in the 10th century. Here, the sellers are as colorful as the produce in their stalls, and have a very particular way of calling out to draw in customers.

At Ballaró, you’ll mostly find locally-sourced fish and meat, fruits and vegetables, like the unusual “broccolo”, or green cauliflower. In Sicily it’s prepared in soups, eaten raw in salads, or fried with anchovies. But you’ll also find cooked food to eat on the go, like “panelle” (fried garbanzo bean pancakes), “sfincione” (a kind of thick pizza bread with onions and anchovies), and “stiggiole” (grilled tripe on a stick).

Street food is an important part of the history and culture in this region, and the local cuisine has a lot of African and Spanish influences. The many civilizations that passed through also left their mark on the culture and architecture, which is what makes Palermo so unique.

Rising temperatures now mean that most tropical fruits can also be cultivated on the island, and you can find those at Ballaró too. The Barbary fig (also known as the prickly pear), for example, is a wonderfully flavorful and exotic fruit that grows on cactuses, and comes in red, yellow and orange, adding even more color to this vibrant marketplace.

The Mercato Ribiera is Lisbon’s largest covered market, and it specializes in seafood. The Portuguese are the biggest consumers of fish in Europe and the biggest consumers of cod, or “bacalhau”, in the world. They like to use dried and salted cod in hundreds of recipes, and have been eating it since the 16th century. Before being eaten, the fish is often soaked for 24 hours to soften it and remove much of the salt.

You’ll find a lot of dried salted cod hanging around the Mercato Ribiera, and a lot more besides. The traditional produce sold here includes palm oil, salted ham from the region’s black pigs, inky octopus, and the Portuguese green cabbage. This local vegetable is grown by the sea and used in many dishes including the “caldo verde” soup, or as a side, mashed with olive oil and potatoes.

Nearby street sellers will serve you grilled chestnuts, also used by the Portuguese to make puree for desserts and flour for traditional cakes. One sweet delight to be tried at the market is the Pastéis de Nata, a little tartlet made with cream, fresh eggs and cinnamon syrup, then sprinkled with powdered sugar.

On Sunday mornings, there’s a Collectors Fair, a bit like a flea market with objects such as coins and stamps to browse. The second floor has also recently been converted into an artisanal and cultural space, offering handicrafts and more local produce like port and honey for visitors to take back home.

Visit Amsterdam on the London to Amsterdam itinerary

Amsterdam is a city full of canals and marketplaces. You’ll find them in every neighborhood, and the fruits, vegetables and flowers sold there form an important part of the Dutch economy. In fact, the Netherlands is Europe’s biggest exporter of agricultural produce, and the food grown in its giant greenhouses won’t ever come into contact with chemical pesticides.

Since 1905, the 250 market stalls lining over 1 km of Albert Cuyp Straat have drawn residents and tourists alike. This is the largest and most popular outdoor market in the Netherlands. Here, you’ll find everything from fish and vegetables to shoes and luggage. You’ll likely see locals gulping down raw herring or a few fresh oysters at lunchtime.

But the most popular snack is surely the paper-wrapped cone of fries. The Dutch cook their potato fries at a low temperature, leave them to rest, then deep-fry them in oil before serving them with a variety of different sauces: tartar, chilli, peanut, or even a “warrior sauce” with onions. Delicious!

For dessert, there’s the traditional Stroopwafel, invented by a baker in Gouda over 200 years ago. It’s a waffle filled with syrup and cinnamon spices plus another secret ingredient… You’ll have to taste it yourself to guess what it might be!