The history of London is intrinsically linked to the large waterway that runs through its heart: the River Thames. It makes sense then, that a walk along the bank of this river is one of the best ways to take in some of the city’s major sights. From Westminster, where you’ll find the Houses of Parliament, this walk will take you east for about two miles along the south side of the river, to the famous London Bridge. You could walk this in about an hour, but if you have the time, take as long as you can and visit some of the fantastic attractions en route.

Start your walk on the north side of Westminster Bridge. If you arrive by tube, take the exit that leads to the bridge and then look up! Towering over you is a glorious sight and one of London’s most famous landmarks: Big Ben. Strictly speaking, ‘Big Ben’ is the name of the 16 tonne bell housed inside the clock tower, but we Brits commonly refer to the tower as Big Ben. This magnificent ornate tower is attached to ‘the mother of all parliaments’: the Palace of Westminster. The building is very grand and looks much older than it actually is, built during the reign of Queen Victoria, it was designed to express national greatness by mixing decorative English gothic with Elizabethan style. To get the best view of Westminster, cross over to the south side of the river, and head down the steps to the London Eye. 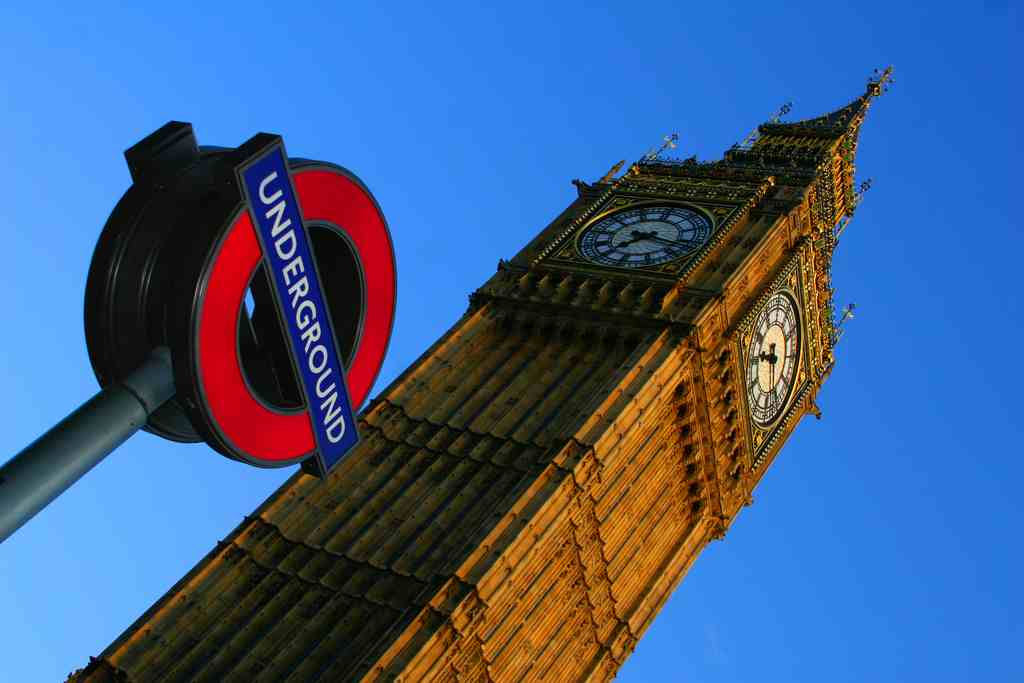 Opened in 2000 as part of the millennium celebrations, and initially built for only five years, the Eye (as locals call it) is now one of London’s most popular attractions. Europe’s biggest Ferris wheel, it is constantly rotating in slow motion and a ‘flight’ in one of its 32 pods (one for each of the city’s boroughs), gives you thirty minutes of London gazing. At the highest point you’ll be 135 metres above the city, and on a clear day you can see up to 25 miles away. The views are spectacular and it’s great fun spotting the landmarks you know in amongst the labyrinth of streets and buildings. 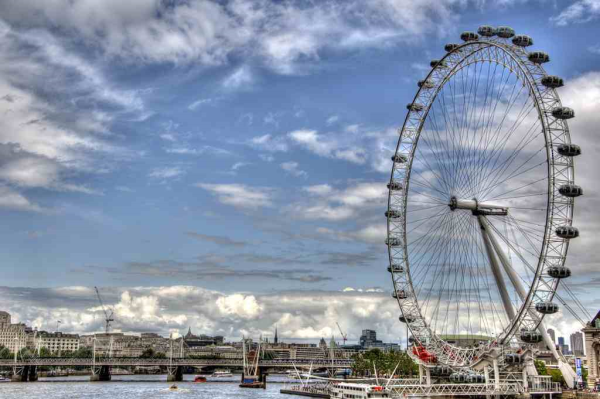 Continuing east you’ll pass the Millennium Gardens, and quite possibly, a few street performers and human statues that are often excellent entertainment. Walk on, under a railway bridge and the Hungerford pedestrian bridge, before coming across a set of Corbusier-style grey concrete buildings to your right. Often called, ‘the bunker’, the first of these buildings, The Royal Festival Hall, was built in the 1950s to lift spirits after the end of World War II, and to commemorate the centenary of the ‘Great Exhibition’ of 1851. The Great Exhibition was hosted by Prince Albert and was designed to celebrate British and commonwealth inventions and greatness when Britain was still a huge empire. The mid 20th century buildings don’t exactly resemble any of the Victorian splendour and instead, they have a marmite effect on people; that is, you either love or loathe them. I’ve never been a fan of marmite, but the one redeeming feature here, is that at night, the buildings are lit up in different colours and they do actually look great.

If you come here in daylight, don’t let the grey concrete repel you from exploring what’s inside; the Southbank Centre is one of the country’s most vibrant cultural spots, and there are always fantastic events taking place here. The complex is made up of several concert venues where you can hear some of the top talent in classical and world music; an art gallery that hosts temporary modern art exhibitions; the BFI Southbank that is the UK’s centre for film, which has several cinemas and library filled with archived films, and finally, the National Theatre. Inside the vast foyer or on the roof terrace of The Royal Festival Hall there are often free cultural events and if you’re here in the summer, there are free outdoor performances in front of the National Theatre. 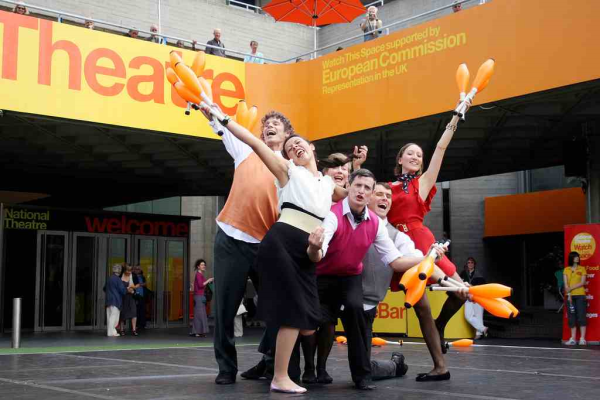 Continue along the walkway and the next big building you come across is Gabriel’s Wharf; once a power station and then a meatpacking factory, today this is a complex of craft and design shops, studios and restaurants. To Londoners, this building is known as the OXO tower since during the time of the meatpacking company, the local government had banned illuminated advertising on buildings. To get around this, the company cleverly incorporated the name of their famous stock cubes, OXO, into the windows on the building’s tower. Today there’s an elegant restaurant on the top floor, along with a public viewing gallery that’s free and open to the public everyday from 10am – 10pm – just take the elevator to the eighth floor and enjoy the views.

Continue along another 400 metres or so, passing Blackfriars bridge on your left and you’ll come across and an enormous industrial brick building with a 99 metre high chimney soaring high into the London sky. This is the Tate Modern, once a power station and today, one of the very best places to see 20th century art. What’s more, it’s free to visit! Take the side or west entrance into the building and you’ll arrive in the humungous ‘turbine hall.’ Here there are often large-scale art installations, such as the incredible creation by the Chinese artist Ai Weiwei, which consisted of millions of hand made porcelain sunflower seeds covering the floor space. Upstairs on level three and five there’s a permanent collection with works from the modern day greats such as Monet, Miró, Pollock, Rothko, Giacometti, Matisse and many more. 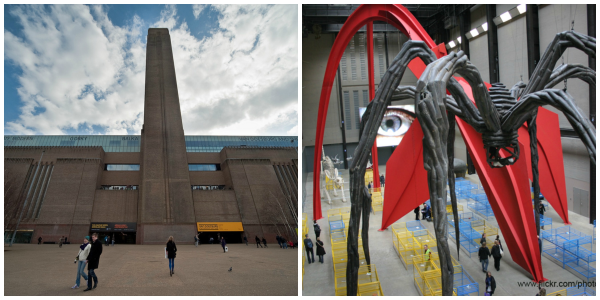 Directly in front of the Tate Modern is the famous footbridge that appeared in the 2009 film, ‘Harry Potter and the Half-Blood Prince.’ It was designed by the celebrated British architect, Sir Norman Foster. When the Millennium Bridge opened in 2000, it swayed so much that two days later it was closed to the public and nicknamed, ‘the Wobbly Bridge.’ It reopened in 2002 and today carries up to 10,000 pedestrians a day, wobble-free. It also offers one of the best Kodak spots in London; from the middle of the bridge there is a fabulous view of Sir Christopher Wren’s masterpiece, St Paul’s cathedral. 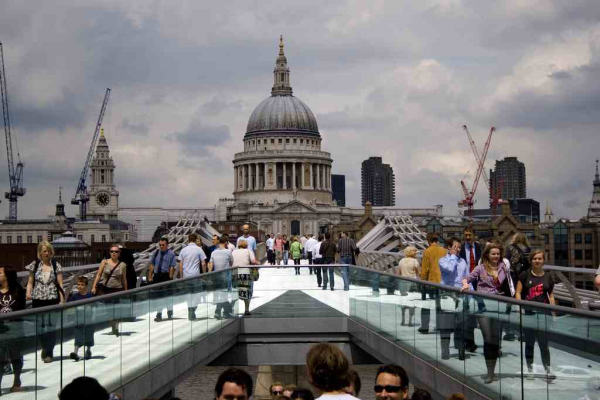 Back on the south bank, next door to the Tate Modern, is a replica of Shakespeare’s own theatre: the Globe. Recreated by the dedicated American actor, Sam Wanamaker, incredibly, there is not one nail or screw in the whole building. Instead, 600 wooden pegs hold it together and it boasts London’s first thatched roof since the city’s great fire of 1661. In Shakespeare’s day, the puritanical Privy Council banned theatres from within the city walls. Theatre-going was seen as a disreputable pastime that would divert people from religious teachings. To get around the law, theatres were built on the south bank of the Thames, beyond the city walls, and Southwark, as the area is still called, was then notorious for its disreputable entertainment; theatre, bear baiting and brothels. 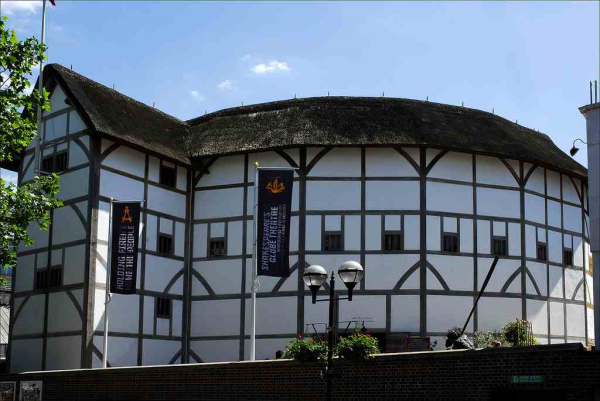 A visit to the Globe today is a very civilised affair; there is an exhibition space that you can visit and there are regular guided tours around the theatre. If you want to see a show here, the season runs from May to September. The cheapest and most authentic audience experience is to buy one of the 700 standing tickets that are below the open roof of the theatre. Just pray it doesn’t rain!

From the Globe, follow the pedestrian traffic that temporarily leaves the river and leads you onto a cobbled street that passes between two very old buildings. One of these, on your right, is London’s old infamous ‘Clink,’ a prison dating back to Dickens’ time. Continue, and on your left, you will pass a replica of the Golden Hinde, the ship that Sir Francis Drake sailed around the world between 1577 and 1580. The street will bring you to the side of Southwark Cathedral, the site of the original church where Shakespeare came to worship. Some parts of the building date back to the 12th century. You will find here many monuments to the many famous historical figures who were connected to the once parish church.

Southwark Cathedral sits directly below London Bridge, made famous by the children’s song, ‘London Bridge is falling down.’ Before being constructed of sturdy stone, the bridge had been made of many other materials and was in need of constant repair, hence the song. Until 1750, this was the only bridge across the Thames, and it effectively became London’s first suburb, known as Borough. When farmers came from surrounding counties, it was here that they set up stalls and sold their produce. The tradition still exists today, and if you’re here on a Thursday, Friday or Saturday, my best advice; come hungry! This is Borough Market and it’s pure foodie heaven. This is the UK’s largest farmers’ market so wander around and feast  your eyes on the vast varieties of vegetables, fruits, cheese, meats and cakes. Many stalls sell delicious food to-go, and you can choose from a huge selection including wild boar burgers, French raclette or Spanish paella. Yum!

To finish your walk, take the steps that lead from the market to London Bridge, and here you have another fabulous view of London. To the west, on the north side of the river, is St Paul’s Cathedral, and to the east, the most iconic bridge of them all, Tower Bridge. What a sight! 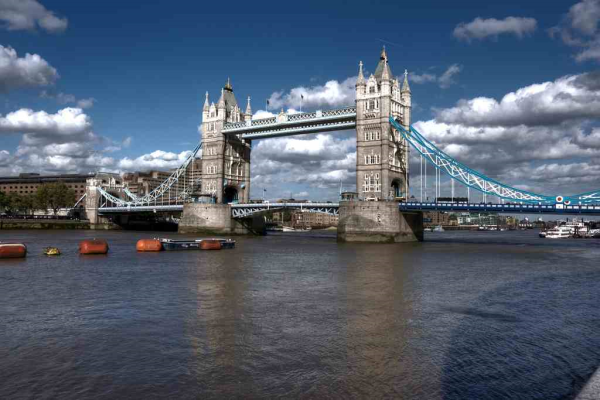