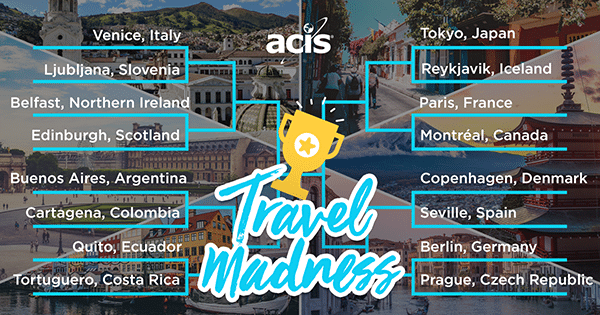 In the spirit of the season, a few weeks ago we launched our very first Travel Madness contest. Basketball is great, but a travel bracket is definitely more our speed. We started with a very sweet list of 16 amazing destinations and presented daily match ups on Facebook and Instagram where people could vote for their favorite. The stakes were high, as we promised the winning destination would become site to a future ACIS Global Conference.

Our first match out of the gate was a good one—blue blood Venice vs relative upstart Ljubljana. I’ll admit, Ljubljana was my pick to go all the way, but alas it was out in the first round, and really, I can’t blame them. Italy is always a good idea. The closest match up for the entire contest was Buenos Aires vs Cartagena. In another surprise to me, Cartagena edged the Paris of South America out, but it sure was close. On the flip side, we had our first big blow out. Rumor got back to the commissioner (me) that fans of Montréal were not happy with their seeding. While certainly a spectacular city to visit, Paris won the battle of the francophone titans with ease.

As we quickly got down to eight destinations it became harder and harder to choose. None of the winners of this round got more than 60% of the vote. We had Carnevale masks of Venice beating the bagpipes of Edinburgh, sea-side Cartagena edging out high-altitude Quito, wine beat sake with Paris knocking out Tokyo, and in a battle of charm, Copenhagen prevailed over Prague.

Travel Madness’ final four destinations included two ACIS all-stars, Paris and Venice, with 56 and 13 ACIS trips visiting them respectively, and two destinations, Copenhagen and Cartagena, that are not as well traveled by our groups, but maybe will be someday. In the end, perhaps due to a year stuck at home and away from our favorite cities, the all-stars couldn’t be stopped. Paris and Venice won again and our final match up was set.

Paris vs Venice. It was so hard to choose, one commenter suggested ‘Parice’ (thanks Sally!). But as I said in the beginning Italy is always a good idea. Did news of dolphins swimming in the now clear watered canals of Venice help sail it to victory? It certainly couldn’t have hurt, and we thank the Queen of the Adriatic and Mother Nature for providing us a bright spot in a tough year.

Did your favorite win? Any surprises? Which destination, included or not, should be the site of a future global conference? What match ups do you recommend for Travel Madness 2022?

Thanks to everyone who joined in the fun and participated.