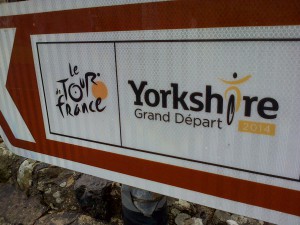 Allez, allez! Yes, it’s underway. The annual event that is the world’s greatest cycle race, is currently in the thick of it. We’re talking, of course, about the Tour de France.

With great fanfare and cycling followers on the edge of their saddles, the three week marathon of cycling began earlier this month. Every year features a different route, chosen by the event organisers, but without fail, you can expect cycling drama in spades. The competition weaves its way across the country, tackles mountain climbs, throws around terms such as ‘king of the mountains’, ‘maillot jaune’ and more before reaching its finale on the Champs Élysées. This year is no different.

Whether or not you understand the tactics and rules of competitive team cycling, whether or not you ‘get into’ the event; you can’t fail to appreciate the athletic endeavour of those involved. As a showcase for the landscape of France, it has always been a winner. The TV coverage won’t fail to bring classic scenes of sunflower-filled fields in the summer sun, or the bleached ruggedness of Provence. You can expect rural villages with small-town main streets taken over by the Tour caravan as it passes through. And when things switch to the mountains, expect some glorious alpine peaks with crowds lining the ascents. For all the poetic views, this is a race; these are athletes with all the competitive urges that come with that territory – and you have to expect the occasional spills as things get tight, shredded cycling Lycra and the occasional crumpled heap of bike and rider on the floor.

Tour de…France? Are you sure about that?

For anyone following the early stages, you will be forgiven a quizzical look or two. Glorious rolling countryside of green; hills as expected; quaint villages…all sort of normal, but something not quite ringing true for the land of ‘ooh, la, la’? Was that road sign written in English? Do they have pubs with names like ‘Nags Head’ in France? Time to go grab your maps and check out the ‘Parc National de Yorkshire Dales’. 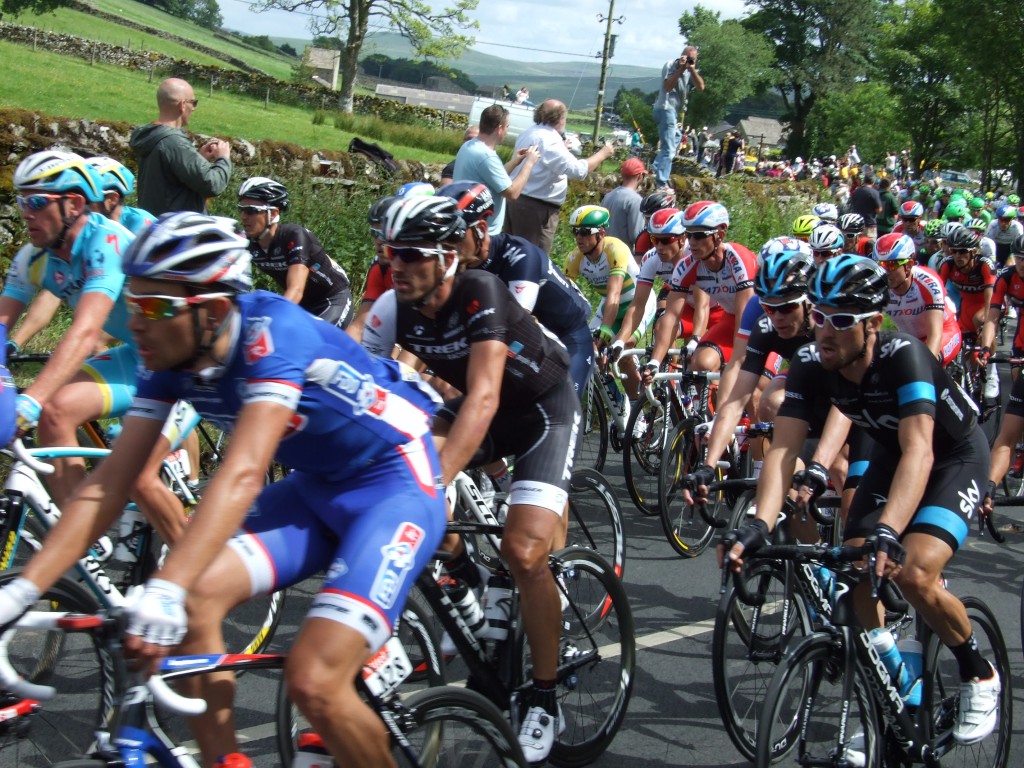 Don’t panic, however, it’s not a fraud on the Tour de France. It’s all above board.

For the 101st running of the Tour the organisers and the Tour decided to go ‘Brit’. For the great send off, the suitably named ‘Grand Depart’, and the first 3 stages, the Tour located itself here in the UK. And what a fete it has proven to be.

Maybe it is still the Olympic effect. Maybe it’s simply the embracing of a great human festival. But this year’s early stages of the Tour saw crowds not seen since the Olympic Torch criss-crossed the land back in 2012. Being the Tour de France, we’re not talking arenas and urban settings here (although these have figured). Rather, it was the scenery of the great National Park of the Yorkshire Dales and it’s hinterland. We’re talking winding, undulating roads passing through sublime countryside of fields and moors; dry stone walls hemming in field and road in equal measure, picturesque villages, local pubs and the dramatic upland of rocky crag mixing with roaming sheep as well as the sight of blooming hedgerow and sentinel oak. A daily route of around 100 miles.

Embracing Le Tour as only Yorkshire can! – everyone in race colours. 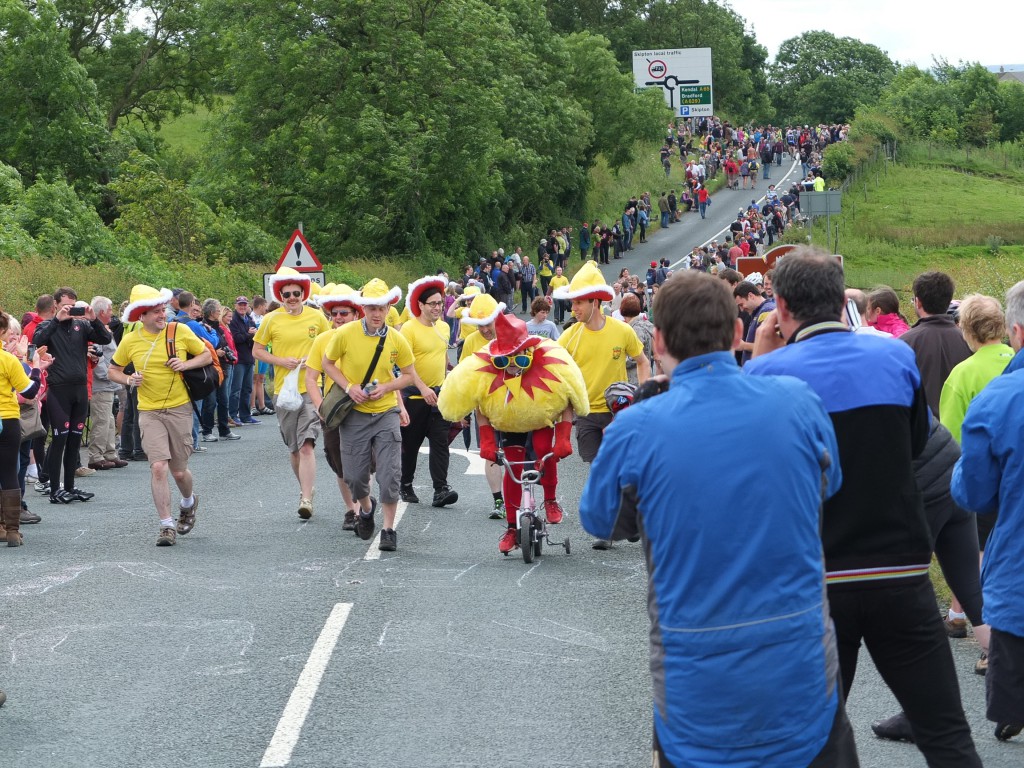 And the region took it to heart: yellow bikes have been the thing to have – any shape and size – to mark the route as it passed through your village. The bunting has been out; pubs renamed themselves in french in honour of the Tour; every community has embraced the spirit of the event in its own way in tandem with their pride at being chosen to be on the Tour de France map 2014 – and believe me, some of these places are fairly remote, with more sheep than locals.

Pop-up campsites were in farmers fields to host the eager for the weekend. People headed to their chosen part of the route in the early hours of the morning both to guarantee a spot roadside and to get ahead of the road closure for the event – there is only one road in…and that is the route!

In villages and towns along the route, thousands crammed themselves road side to cheer on, flag wave and enjoy the festival atmosphere. And all this for a moment that can be over in the blink of an eye, for remember, this is a race and when that Peloton passes, it’s here and gone in an instant, albeit an incredibly exciting instant of whirring peddles and multi-coloured cycling kit. 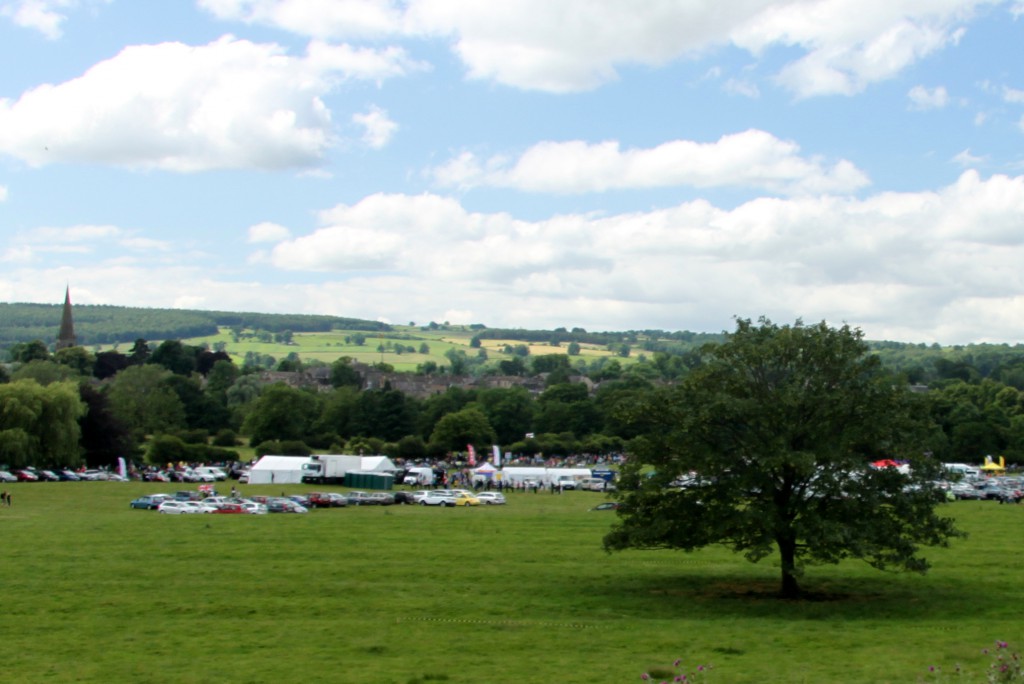 From Leeds to Harrogate, through the likes of Kettlewell, Bainbridge, tiny Reeth, Middleham, Masham and all green and lush points in between; from medieval York into the Pennines, Blubberhouses and down to Sheffield, we’d like to think we set the Tour de France on its way in grand Yorkshire style and with a gauntlet thrown down to the rest of the route to celebrate in similar Tour style. The third leg brought matters from Cambridge to London, saluting the Olympics of 2012 by passing through our Olympic Park before a final sprint onto the Mall in front of Buckingham Palace and great crowds not seen since that glorious summer of 2012 –
there’s nothing like finishing in style!

We’ve come over all French

It’s been a very Gallic affair on the byways of Britain, with gendarmerie outriders leading the way and the Tour support with their French number plates. French with a Yorkshire accent maybe takes more getting used to!

With the Tour now back across ‘the Channel’ and on to more usual territory, you can expect your road signs to be in the lingua franca once more. Dramas will continue to unfold as they have already and as they did even on the first day – bad luck Mark Cavendish and his dislocated shoulder on the finish line of Stage 1 – ouch! The Champs Élysées inches closer but there remain many days of saddle toil to come. 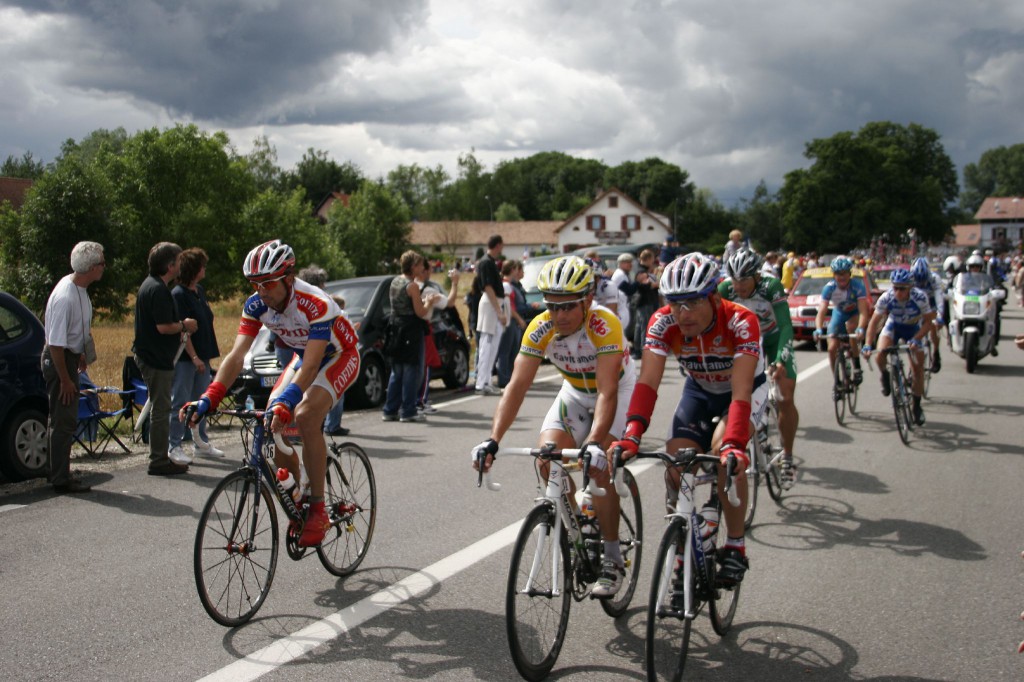 Considering visiting France for yourself? Check out ACIS tours to La Belle France!