I confess – I love Rome. Not so much the Colosseum and St. Peter’s (and I ADORE those places) but rather just walking around through the piazzas and the tiny streets that connect them all together like an ancient necklace.

There is that famous adage, “Roma non basta una vita” which means “A lifetime is not enough”, but I will assume that most people have about three hours for a brief walk through time. Usually I start my walk in the piazza in Santa Maria in Trastevere and end up at the Piazza del Popolo. It is a walk that spans every conceivable period of Roman history with stops on the way for shopping, cappuccino, and gelato. It is a walk crammed with fountains, a Roman arena here and there, and ancient pillars. It is the story of Rome – it is the story of a city I have come to adore.

The main piazza in Trastevere is where we find one of the oldest churches in Rome, Santa Maria, which has walls dating back to around 300 A.D. It is not a bad place to start. Across the Ponte Sisto bridge, that connects Trastevere with the beautiful Via Giulia, we see Michelangelo’s dome of St. Peter’s in the nearby distance. We are heading to the Piazza Farnese to see the Farnese Palace, designed by Michelangelo, and now home to the French Embassy. On an evening stroll you can often see the magnificent frescos inside designed by the famous painters, Annibale and Agostino Carracci. This square is dripping with history. The two bathtubs in the fountains were pulled from the baths of Caracalla. Caravaggio, the painter who had a terrible temper, had a bad argument with somebody after a tennis game in the square that resulted in death. As a result, he fled Rome. I guess you would!

Right next door is the Campo de Fiori. The best slab pizza in town is at the Forno and the fountain, one of many we will see today, is stuck at the end of the square because what looks like Darth Vader is taking up the center space. His name is Giordano Bruno and he was unceremoniously burned alive here in 1600 for outrageously suggesting that the Earth was not the center of the universe. Shame on you Giordi! This place is abuzz with a local market most days and cafés and restaurants surround the outside of the square. It is a real hangout at night. At the bottom of the square, is where Julius Caesar was assassinated in 44 BC. Yeah, it is a wild square the Campo de Fiori. 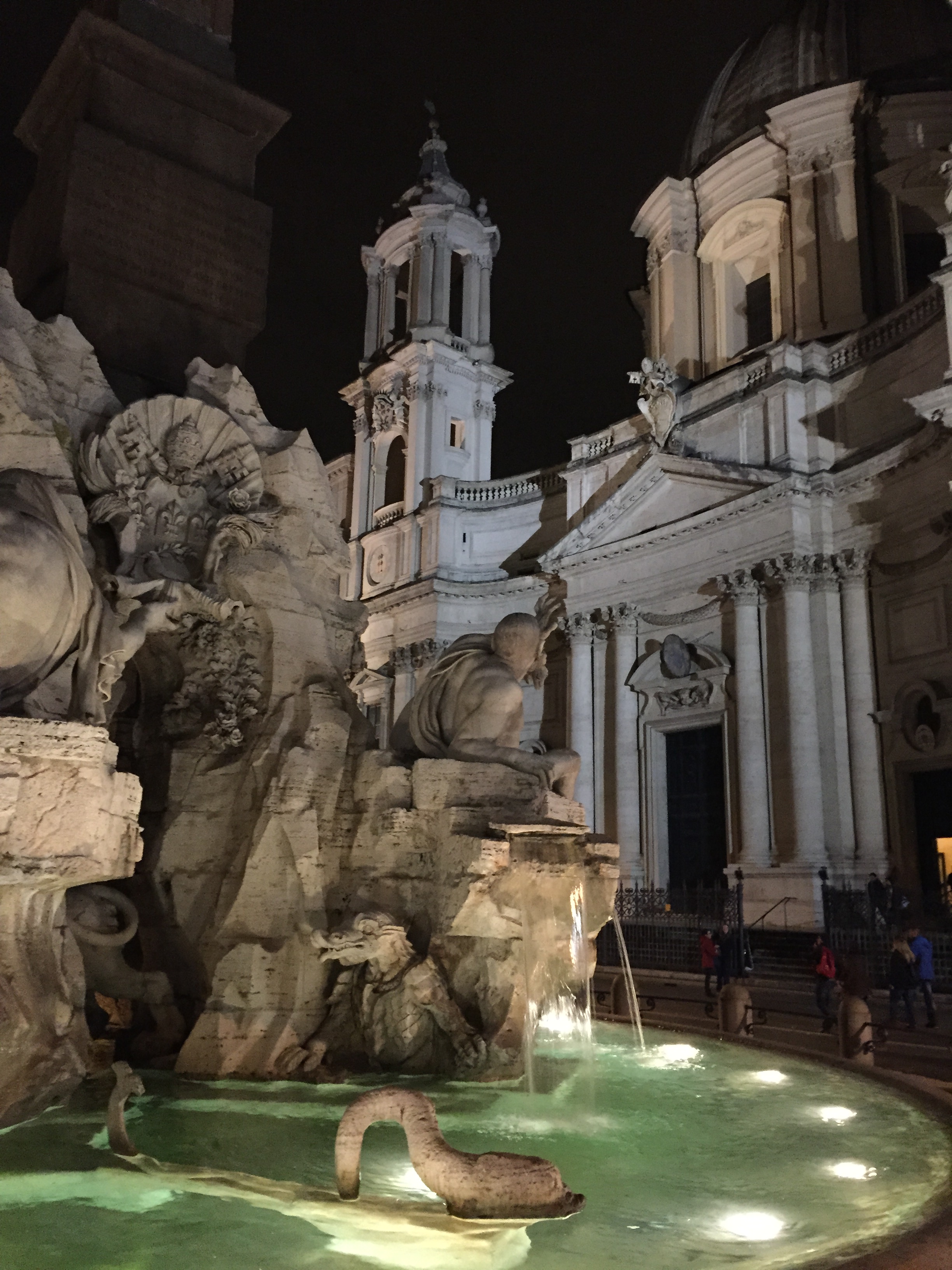 Across the busy street, passing the biggest mortadella (real healthy) in the world, we pass a Renaissance palace, the Cancelleria, and we wind ourselves into the fabulous Piazza Navona. Here we have a formal introduction to Bernini, the cool and iconic Baroque master of the Pope, and Borromini, the brilliant and very depressed foil to the master himself. This place is loaded. Inside of this square, there is a medieval church, a beautiful Renaissance church, a Roman statue at one end (the Pasquino – the original Talking Head), the ancient Domitian stadium 20 feet below ground (and still visible in some places), an Egyptian obelisk, a Baroque fountain (The Fountain of the Four Rivers), and the beautiful St. Agnes in Agone by Borromini. In between, it is not a bad idea to grab a gelato at Tre Scalini. The tartufo is crazy good!

However, there is no time to lose. Out of the square and passing the senate building we wander into the spectacular Piazza della Rotunda. It is a breathtaking moment. The Pantheon is staring us down. This is the most perfectly preserved Roman building in the world. It is an extraordinary site as you spill out from the narrow street. There is a steady flow of tourists and Romans walking back and forth and around this magical building with a hole in the top. It is the basis for the great Brunelleschi dome in Florence and Michelangelo’s dome at St. Peter’s. The building, now a church, is also home to Rafael and the kings of Italy…and it is free to get in. 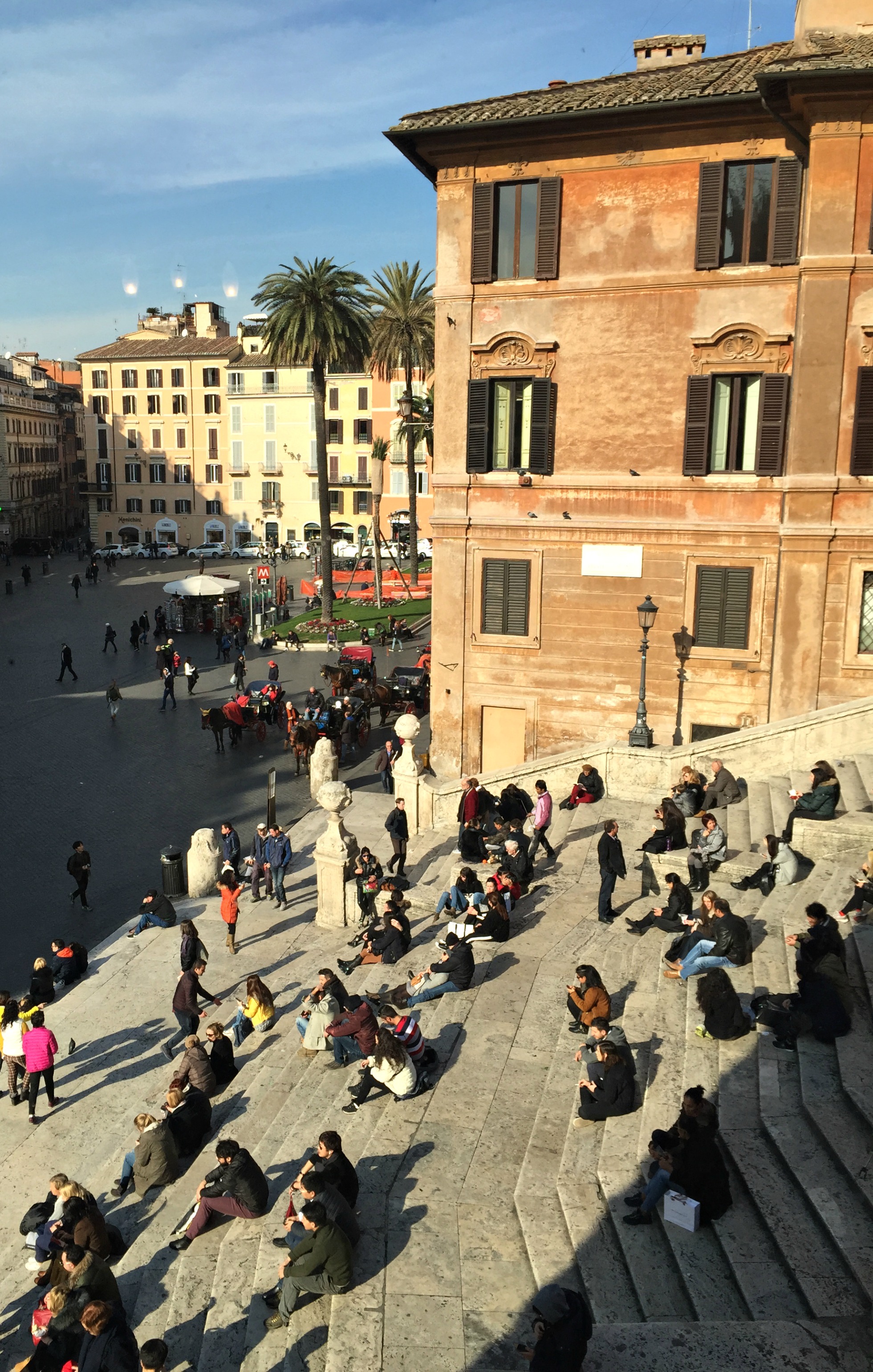 It is a short walk from here through the back streets of Rome, past the Palazzo Chigi, before you spill out onto the craziness of the Via del Corso and up to the Spanish Steps along the Via dei Condotti. There are more designer shops on this tiny street then there are in all of Manhattan it seems! Here I enjoy heading to the Café Greco to grab an espresso and a tiny sandwich. At the base of the Spanish Steps, there is another fountain, this time by Bernini’s father.

We are getting close to the end of the walk. What better way than a stroll down the very chic Via Babuino to the Piazza del Popolo. To the right are the Villa Borghese gardens, and at the Piazza del Popolo you can see clearly down the Via del Corso to the Piazza Venezia and the slightly awkward looking “wedding cake building”, Altare della Patria, designed to symbolize the unification of Italy in the 19th century. Beyond the wedding cake is the Forum, Michelangelo’s Capitoline Hill, the Jewish ghetto, and in the distance, the Palatine and the Colosseum. But that is another day.

One thought on “To Rome with Love…”