Bob Cheney is a retired German teacher from Murrysville, Pennsylvania. During his teaching career, he led multiple trips to Europe in an effort to expose his students to the target language in an immersive setting. His trips to Germany and Austria eventually became a facet of the foreign language program at his school and increased the popularity of German among students.

Now that Bob is retired, he’s not quite ready to hang up his Group Leader hat. He’s leading a trip to Germany for adults this fall in celebration of the 500-year anniversary of the Protestant Reformation. His trip itinerary will include visits to Efrut and Wittenberg (the towns where Martin Luther lived and preached) as well as Munich and Berlin. For aficionados of history, Bob’s trip will be the opportunity of a lifetime!

We asked Bob about his experience teaching German over the years as well as his upcoming trip:

1. Tell us about the 500 Year Anniversary of the Reformation and what the celebration will be this fall?

This year marks the 500th anniversary of the beginning of the Protestant Reformation. On October 31, 1517, Martin Luther nailed the “Ninety-Five Theses” to the door of All Saint’s Church in Wittenberg. The Reformation had a profound influence, not only on religion, but also on music, art, literature, and the German language. The celebration of this anniversary actually began a decade ago, and October 31, 2016, began what is called the “Luther Year.” May of the famous Luther sites such as Wittenberg, Eisenach, and Erfurt, among many others, will be holding special activities and exhibits to honor Martin Luther and the history of the Reformation. Although we can learn the history of the Reformation in books and online, nothing compares to going to the actual places where Martin Luther lived and worked.

2. How could students and teachers observe the cultural impact of The Reformation in modern day Germany and Europe as a whole if they visited today?

The ripple effect from the Reformation has worked its way down through German history, mentality, and language. We see it in the paintings of Lucas Cranach, listen to it in the music of Johann Sebastian Bach, and read and hear it in the German language. It was at the Wartburg Castle near Eisenach, that Luther translated the Bible from Hebrew and Greek into German. Not only was this revolutionary because now, for the fist time common Germans could read the Bible for themselves, but it also unified the German Language. The German that American students learn in their classes today is based in large part on the language of the Luther Bible.

3. How many trips did you lead with ACIS over your career and where did you travel?

I have led eight trips. Seven were student trips to Germany and Austria and one was an adult trip to Berlin, Prague, and Vienna.

4. What inspired you to lead your first trip?

I knew many other teachers who led trips to Europe and I decided it was an important part of being a foreign language teacher. I wanted my students to have the opportunity to not just hear about German culture and see it in pictures (slides back in the day!!!), but also to experience it and be immersed in the language and culture. I always tell students and adults that travel is the best education! 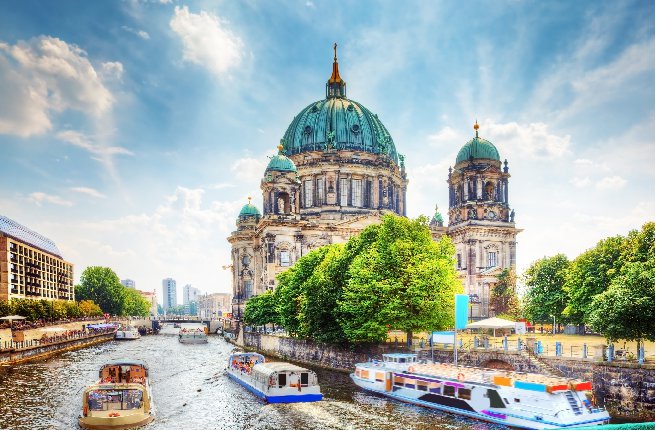 5. How did travel opportunities affect the popularity of the German program at your school?

Once students and the other German teacher in the school went on my first trip to Germany and Austria, other students heard their stories and became excited about the opportunity to learn German and see Germany and Austria for themselves. I was basically the only Teacher in my district taking students to Europe at the time, and so this also impacted the German program.

6. What led you to choose ACIS as your student travel provider?

When I first decided to take students to Germany, I did a lot of research into the options out there for student travel. After reading through information and reviews and also interviewing other teachers, I decided to go with ACIS. I have never been disappointed! Each trip has been wonderful and the service and support of ACIS have always been top notch!

7. What advice would you give to German teachers looking to grow their language programs?

If teachers want to grow their German programs, I would advise them to be enthusiastic, be a lifetime learner, keep as current as possible with the German language and Germanic culture, find as many opportunities as they can to go to Germany and get their students there to see and experience it. An ACIS trip helps to accomplish all of these.

I am excited about the adult trip I am leading this October 18-27, 2017. Although I have been in Berlin a couple of times, since reunification it has been an ever-evolving city. I’m anxious to see all that is new there and to show the participants some of the highlights of this city. I have never been to Erfurt, Wittenberg, the Wartburg Castle, or any of the “Luther country” sites. To be there just days before the actual 500th anniversary of the Protestant Reformation makes this an exceptionally thrilling adventure. My German teacher friends assure me that I won’t be disappointed! And then we go down to Munich. This is one of my favorite cities in Europe, and one I have visited many times. After the official city tour, I really enjoy taking my group to some of the “hidden treasures” of Munich on what I call the “These Are A Few Of My Favorite Things In Munich Tour.”

Of course, we end in the Alps with a visit to Neuschwanstein Castle. This is the highlight of many first timers to Germany. Of course, it is not my first time there, but it is my first time being in Germany and at this castle in the fall. I’m really looking forward to this ACIS trip. This will certainly be a wonderful, memory-making experience for anyone who joins me!

500th Anniversary of the Protestant Reformation