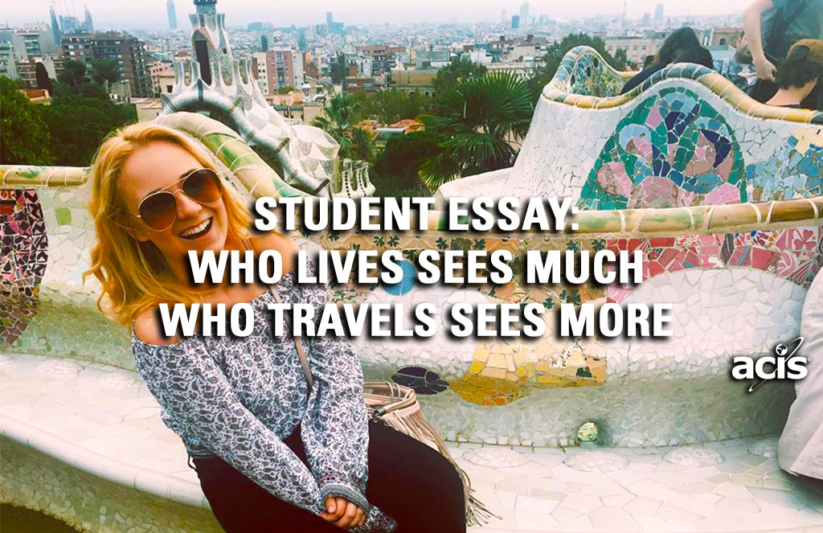 Ryan Waltz is a student at Virginia Tech University. She wrote the following essay reflecting on her experience traveling to Spain with ACIS in 2013 and how it has shaped the direction of her life since then.

“Who lives sees much. Who travels sees more.”

Eight simple words translated originally from an Arab proverb are eight words I have chosen to live my life by for the past seven years. Distinguishing between living and traveling in such a simplistic yet powerful way is the reason this proverb has stuck with me, and eventually sparked the fire in me to see the world.

In high school, I found out about ACIS through my high school’s Spanish program. At the time, I didn’t really care about the language as much as just the opportunity to travel, so I decided to take advantage of it. Growing up in an affluent, predominately white area of Northern Virginia, this trip was the most cultural experience to which I had ever been exposed. Seeing children playing in the streets with makeshift soccer balls, it dawned on me I hadn’t even noticed their ripped clothing and bare feet because the bliss that radiated from them overshadowed any aspect of their impoverished lives.

From then on, I decided traveling and experiencing cultures all over the globe is a vital aspect for improving my perspective and quality of life. I remember being featured in the ACIS or Travel Changes Lives video after only seeing one city in Spain, Toledo. Although my journey had just begun, I already felt in the pit of my stomach that something was right. The tour guides were absolutely amazing, the itineraries for the day allowed us enough freedom to soak up the culture while also incorporating highly educational information.

At the time, I couldn’t speak any language other than English. The fact that my communicating with these children and families while abroad through facial expression and body language ended up being a life changing experience for me fully supports Stewart’s claim. The idea that “there is a direct link between your quality of communication and your quality of life” could not be more applicable in this situation. I was able to break out of my comfort zone knowing I would not be able to communicate with these people in the only way I thought I knew how- verbally. Living in Spain for a mere two weeks improved my quality of life because it led me to make the decision to pursue a double major in Spanish and actually study abroad in Spain for summer semester II and fall semester of 2016.

I really can’t even begin to articulate the emotions, experiences, and adventures I’ve gained since living abroad. I lived in Ovied, Asturias, Spain from July to December. Those 5 months were undoubtedly the best of my life. Why go back to Spain, you ask? ACIS left me with just enough to crave more. Seeing how beautiful the Southern region of the country was only made me want to see the north–and I have never been more thankful that I went with my gut in making that decision.

Asturias is very different from the warm, flat Southern Spain that I had previously seen. It is heavily forested, mountainous, and has beautiful beaches on the coast. Throughout my duration abroad, I traveled to Gijon, Oviedo, Leon, Llanes, Rutas de las Xanas, and Naranco. Beyond that, I had opportunities to take small trips to Florence, Italy; Budapest, Hungary; Split, Zagareb, Plitvice and Krka Lakes, Croatia; Vienna, Austria; Birmingham, United Kingdom; Dublin, Ireland; Copenhagen, Denmark; Lisbon, Portugal; and Paris, France.

After returning to Blacksburg for my fifth semester, I have already noticed I am no longer the person I was before studying abroad. Trivial issues no longer occur to bother me like they had, I’m far less concerned with materialism and far more concerned with human interaction.

Essentially, my travel bug has been triggered. I now crave adventure daily. I am constantly waiting for the next opportunity to see another part of the Earth and am continuing to attempt to figure out how to make it happen. I am currently job searching after I graduate from Virginia Tech for a job that will allow me to see even more parts of our beautiful world and soak up the culture that comes along with them — I have ACIS to thank for kick-starting me in the right direction and changing my life without even realizing.