See our travel policies in relation to COVID-19
Click Here
It’s been snowing in Britain this week! You could hardly miss it if you were here: on Saturday four out of the five most read stories on the BBC related to the impending white doom that was crossing the country.

My part of the country was one of the worst hit: we had a good 4 inches of snow. Oh… it’s almost as though I can sense your laughing at that last statement. Please, allow me to explain this whole issue to an American audience!

The stereotype goes that the British are obsessed with the weather. Such generalisations often, of course, exist for a reason. Many people here find social situations a little awkward and it’s the most familiar thing in the world to fall back on a discussion about the weather. I’ve done it myself: there’s a slightly difficult pause as I’m getting my hair cut and I comment on the terrible rain we’ve been having, or the lovely bit of sunshine last weekend. It’s familiar territory, it’s safe and we know the parameters of the discusssion. Nothing remotely embarrassing can occur.

I’ve heard it said that it’s not just the fact the topic is safe that makes us so interested in the weather; it is because we don’t have any of it. We’re a generally mild little island sheltered by the gulf stream, and don’t have natural extremes of weather. When it rains a little more than normal, or the temperature pushes above 75F (I’m not joking) it’s deemed worthy of serious comment. Newspapers begin to roll out the “heatwave” or “Blistering London is hotter than Athens!” headlines (or wherever they can find that’s usually warm, but happens to be having a coolish day). We don’t usually have natural disasters such as tornadoes or hurricanes (the last one we did have, October 1987 is etched in my memory as a majorly significant event from my youth). The slightest deviation from the norm is discussed. Put simply, we love the drama of it.

Therefore when it SNOWS, the British go crazy. The first thing that occurs is a delightful, almost childish excitement about it. Twitter is full of people upset that it hasn’t snowed yet where they are. I’ve seen grown-up adults crying “I want snow!”. Then the entire transport system disintegrates. Roads are blocked, trains are cancelled, schools are closed, and earnest well-meaning messages go out warning people to carry spades in their cars and thermos flasks. “Do not travel unless absolutely essential” is the refrain. Bear in mind that unless we are talking about parts of Scotland, this chaos is ensuing with literally 2-4 inches of snow on the ground and temperatures no colder than 25F. I should mention in passing the Scots, who get snow more regularly, tend to be better prepared and just get on with things.

This is a joke (obviously) but it sums up the mood brilliantly: 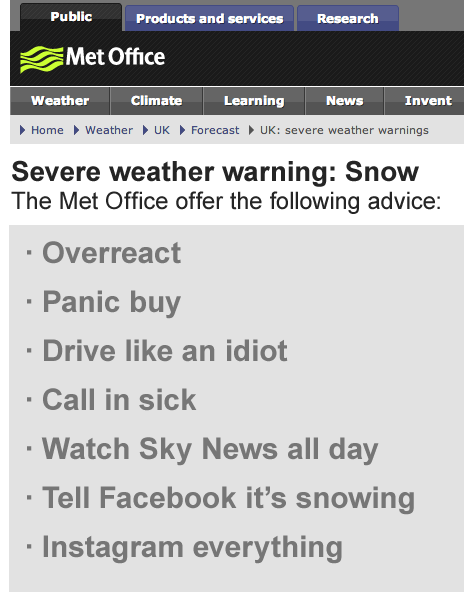 We just adore it. My Twitter feed is full of pictures of the snow: gardens in the snow, dogs in the snow, cars in the snow, dustbins covered by snow, train cancellation boards (because of the snow). People tweet their locations with an indicator of how heavily it is snowing, so there is a real time record of where Snowmageddon has hit. The BBC actually had a “live snow blog” up last weekend. What could they possibly hope to report on a rolling basis? I’ve no idea, but people read it and watched the weather reports as if were literally the most important thing in the world. Australian and South African friends look on in total bafflement. As my Swiss friend, Rose, put it: “The UK is the only country where there is snow. Ever. In the whole world.”

Next come all the criticisms. Roads aren’t gritted properly. Stockpiles of grit are running “dangerously low” (or we are assured that stocks are “holding up”). The country has fallen to pieces. Why are flights being cancelled? We’re a joke: how does Canada, Finland or Switzerland manage? Then comes the defensiveness: well, they are used to lots of snow. We don’t get much, so it’s no surprise this happens. That argument works to a point, but would be more convincing if it didn’t happen every single year. After a couple of days people complain about the same snow they had looked forward to SO very much. “Fed up now. Wish this would go.” Etc, etc.

A British snowpocalypse generally lasts a week. It can be much less, with all the fuss over in just one day. The press will herald its passing with headlines such as “NEXT COMES THE BIG THAW” and there will be flood warnings everywhere. Finally everything is back to normal. The UK is mild, it is green again, and it is damp. The drama of the snow has passed. All we have to look forward to are the newspaper reports on the few warm days at the end of March “that the UK is hotter than Madrid!”. It will then rain, pretty much for the entire summer, until September when three sunny days in a row are heralded as an “Indian Summer”.

Naturally, and in summary, it’s so easy to mock the Brits for all this. I grew up in Germany, which gets much more snow and doesn’t collapse in the same way. However, I’ll also remark that the childish delight with which the arrival of snow is greeted in the UK is incredibly endearing. There aren’t many occasions when an adult is permitted socially to revert to this state of excitement and wonder. As ever, and as the “Met Office” image above displays, matters are generally conducted with a healthy dose of humour and self-mockery. We KNOW we’re rubbish at the weather, we KNOW we are obsessed by it, and frankly we don’t really care.

In my opinion, by a long way the best thing about Britain are its inhabitants. If you haven’t been you should come and visit us. Just, whatever happens, make sure it’s not on one of the few days a year it actually snows here. You’ll think you’ve landed on another planet. It might even be partially white.